Over the weekend, one of my friends texted me the news that Biz Markie passed away at the age of 57 due to complications from Type 2 diabetes.  He's most famous for his song Just a Friend, which was huge back in the late 80's.  To this day... I have to sing along with it whenever it comes on.  Can't help it.  It's just one of those songs.
That being said... I don't want to make it seem like I was the president of his fan club.  Just a Friend is the only song I could name a few days ago.  But after hearing the news, I did listen and add a few songs of his to my classroom playlist.
I might not own any albums of his, but I own a few of his trading cards...
The first one captures him throwing out the first pitch at the Oakland A's game versus the Houston Astros back on July 23rd, 2014: 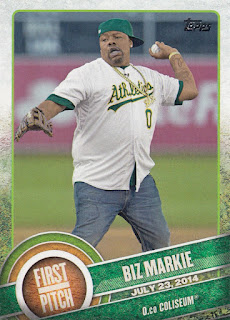 2015 Topps First Pitch #FP-05
This is a pretty cool insert.  I like how Topps actually did the research and documented the actual date of the event. 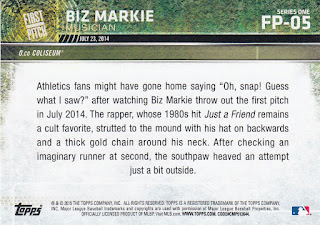 On the back, they even break down his approach to the mound and the actual pitch... which you can see here.
Next up is an awesome card that captures why he was nicknamed The Clown Prince of Hip Hop: 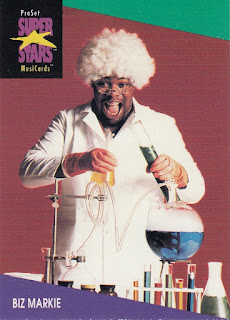 1991-92 Pro Set Super Stars MusiCards #112
The back of the card mentions his comic rhymes which is exactly Just a Friend is composed of. 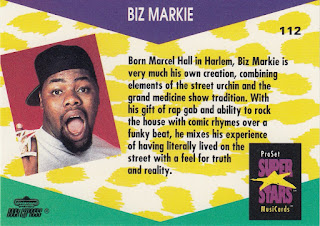 The final card of his in my collection is this sticker autograph I purchased off of COMC right after I added the Topps First Pitch card to my collection: 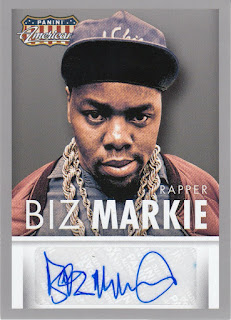 2015 Panini Americana Signatures #S-BIZ
Panini doesn't waste any time mentioning his hit song, but they also write about his guest appearances on In Living Color as well as his work with my favorite group... The Beastie Boys. 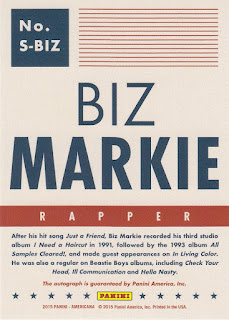 If you're interested, here are songs he did with them:  The Biz vs. The Nuge, Intergalactic, and the cover of Elton John and Bernie Taupin's Benny and the Jets.
Rest in peace Biz!  I hope you're in a better place and you're up there hanging out with MCA, entertaining and making everyone around you smile... like you did for millions of people over the years.
Happy Thursday and sayonara!
Posted by Fuji at 3:00 PM