Before this past Saturday... it had been 546 days since I last walked around a flea market and purchased some cards.  Obviously... a lot has changed over that time.  I thought about listing some things, but honestly... it was a little depressing. 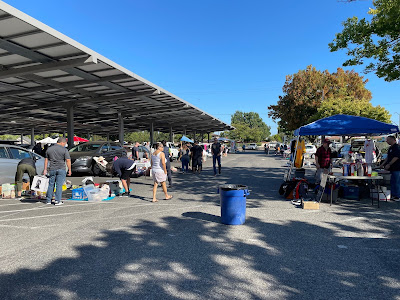 Instead... I wanted to keep this post positive and focus on my first trip back to the Branham Flea Market in nearly 18 months.  One look at the photo above reveals that over 50% of the spots were vacant, but the good news is the high school is hosting flea markets again and there were three vendors with cards.
The bad news is that prices are pretty inflated right now, so I only made one purchase.  But one is better than none.
Purchase #1:  Sports Cards $1
On the right side of the above photo, you'll see a guy with some Wheaties cereal boxes.  He's a regular who I've purchased cards from on numerous occasions.  In the past, I've referred to him as Box Bottom Guy.
He had several boxes of cards that were marked at 25¢ to 50¢ each.  As I was digging he told me they were five for a buck, so I purchased these five...

1997 Donruss Limited #53
There were a bunch of Hideo Nomo cards, but I had no idea if I needed them or not.  I pulled this one aside, because I didn't recognize this card.  Luck was on my side, because when I got home I discovered I needed this card.

1995 Zenith #149
When I saw this card sitting in the box, I knew owned a graded copy of this card... but wasn't sure if I had one for my Nomo binder.  This time I wasn't so lucky.  Oh well... it was only 20¢.
My favorite card in the stack was this rookie card of Andy Van Slyke:

2008 Rittenhouse WNBA Promo #P1
Collecting promo cards have been a side PC for over a decade.  I don't remember seeing this one, but haven't had time to check my promo card box.

1996 Zenith Mozaics #17
Actually I had pulled out eight cards, so I needed to trim the fat and get the stack down to five cards.  I opted for this Montreal Expos insert to represent the fifth and final card.  It's all about that Dufex technology.
My friend Tony also brought out cards, but he's currently taking advantage of the 2020-21 Hobby Boom and doesn't have any bargain priced cards.  I can respect that.  These people have to strike while the iron is hot.  Although based on my recent eBay sales... things seem to be cooling off quite a bit.
The last guy with cards had some 90's sets.  One of them was a 1994 Stadium Club Member's Only box set that was shrink wrapped.  He was asking $30, which seemed fair considering one closed on eBay back in April for $74 + shipping.  The pre-lockdown collector in me would have grabbed it, but I'm starting to realize I don't need to buy one of everything.
In fact... I currently have several stacks of cards sitting in my office that need to be organized, scanned, written about, and put away.  Some are from care packages.  Others are from my card show haul that took place a few weeks ago.  Plus... there's my recently arrived COMC package.  I will be sprinkling cards from each of these stacks into blog posts over the next month or so.
Today, I figured I'd wrap up this post with two Montreal Expos cards from the COMC order which pair well with the 90's insert I picked up at the flea market...

2002 Topps Chrome Refractor #T109
I'm not the kind of guy who typically searches for Montreal Expos inserts or parallels on COMC (well at least not anymore), so I'm guessing these were blog inspired purchases.  Unfortunately... if that's the case... I can't remember when or who to give credit to.

1997 Bowman Chrome Scout's Honor Roll Refractor #SHR3R
However thanks to the great bookkeeping at COMC, I can tell you that I spent $1.68 on the Frank Robinson and $2.17 on the Vladimir Guerrero.  No exactly the quarter bin prices I'd like to pay... but these were purchased during the 2020-21 Hobby Boom when discounted cards were more difficult to track down.
I'm not complaining though.  My COMC order arrived on schedule (I had to pay $16.49 for Economy Rushed).  I've got plenty of blog material sitting on my desk.  There are still four weeks left in my summer break.  And one of my favorite flea markets is back in session.
Vendors and bargains were scarce... but there was plenty of fresh air for everyone.
Happy Tuesday and sayonara!
Posted by Fuji at 3:00 PM