Hoops I Did It Again

When my Little League career ended back in the mid 80's... my hoops career bounced and took off.  A few years after that my interest in collecting basketball cards followed.  This lasted throughout the 90's until I sold off my collection in the early 2000's and picked up right where I left off when I returned to the hobby in 2008.  Sometime around 2010 my interest in the NBA and buying basketball cards faded and hasn't bounced back.

These days I will still add them to my collection when I stumble across deals that are too good to pass up or when fellow bloggers send them my way.  I'd estimate basketball makes up less than 10% of my collection.  That's quite the fall from grace when you consider that they once represented 30 to 35% of my collection a decade ago.
That being said... I still have thousands of basketball cards sitting in boxes.  Two weeks ago I decided to sit down and organize a 5,000ct. box filled with stuff I've tossed in there over the past decade or so.  And since we're in the midst of the NBA Finals, I figured I'd show off some hidden treasures from my sort.
The first card is the newest addition to my Prime Number PC: 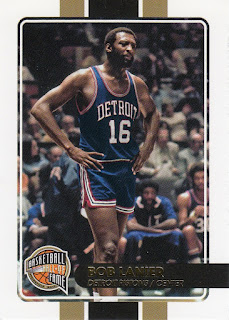 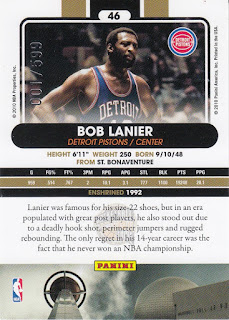 The only card serial numbered #1 in my collection with a higher print run is an Eddie George insert #'d 0001/1750.
Next up are a pair of Stephen Curry inserts from his rookie year.  Both are run-of-the-mill cheap looking, overproduced inserts:

2009-10 Panini Generations #8
2009-10 Panini Rookies & Stars Studio Rookies #9
However the card on the left sells for around $40 and the one on the right fetches around $20.  Not bad for a pair of boring inserts.
The next card is probably the most valuable card I found: 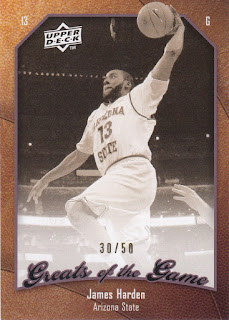 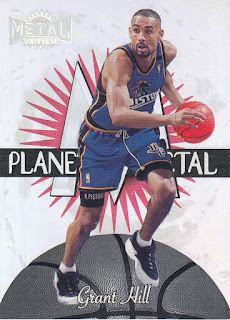 1997-98 Metal Universe Planet Metal #11PM
This insert set became popular a few years ago when Michael Jordan inserts started soaring in value.  It doesn't command triple digits like MJ, but it's still a cool card to add to my insert binder.
And last but certainly not least is this card of The Glove:

1998-99 Ultra Exclamation Points #13EP
The saying "they don't make them like they used to" definitely applies to modern day inserts.  This card is made of two parts... the sleeve (shown above) and another card that fits inside:

I was surprised that I wasn't familiar with this insert set, since 1998/99 was one of my peaks in basketball card interest (thanks to Vince Carter).  Part of it might have to do with the fact that these inserts were tough pulls (1:288 packs).
Basketball card posts are pretty rare on this blog, so I might as well kill two birds with one stone and feature some cards recently donated to my collection.
First up are some more cards from Reader X... also known as Xavier Higgins.  He sent me two large care packages which included a few Los Angeles Lakers cards.  I already showed off the Kobe cards here.  Here are the rest of the Lakers he sent my way: 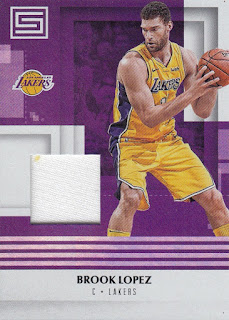 2017-18 Panini Status Materials #M-BLP
Lopez already has a place in my Stanford PC.  Now he has found a home in my Los Angeles Lakers PC as well.
Next up are a quartet of basketball cards sent to me by Elliptical Man: 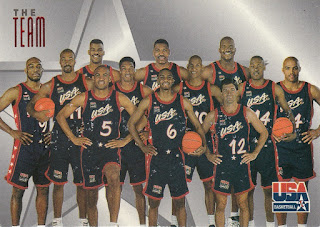 1996 Skybox Texaco USA Basketball #14
Team USA has some basketball fans worried as they prepare for this year's Summer Olympics. 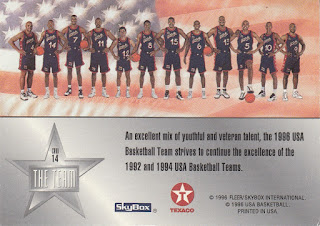 That didn't seem to be the issue back in 1996.  That team featured eleven future hall of famers (sorry Glenn Robinson) and went 5-0 on their way to winning a 2nd consecutive gold medal.
Elliptical Man also sent me a few San Francisco 49ers cards... which for the most part will be passed along to my students.  However... I did add these two to my binder collection:

2019 Panini Black Friday #35
2011 Topps Super Bowl Legends #SBL-XXIV
Thank you Xavier and Elliptical Man!  I might have lost interest in the sport, but I still enjoy adding basketball cards to my collection.
What about you...
Are there any sports you've lost interest in over the years?
If so...
Do you still collect their cards?
I hope all of you had a wonderful weekend.  Mine was exceptionally busy and included my first trip to a flea market in over a year.  Stay tuned.
Happy Monday and sayonara!
Overtime
This weekend Papa Fuji celebrated his birthday.  I wasn't able to visit him in Las Vegas, but the family did sing him Happy Birthday over Zoom. 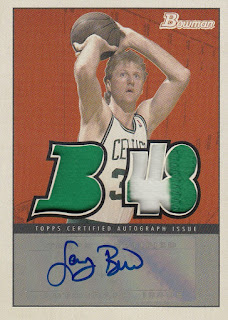 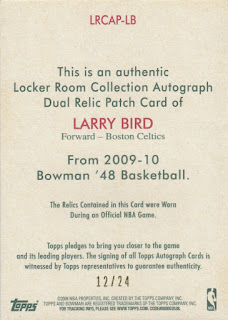