Last week, I learned a new psychological term called "the reminiscent bump" over on Night Owl Cards.  Greg does a great job of explaining what it is, but I'll do my best to summarize it.  It's essentially a tendency for older people to remember more things from their adolescence and early adulthood than from other periods of their life.

When I started this blog eight years ago, one of my objectives was to document my card collecting history for my future self.  And based on my experiences, the reminiscent bump is a legit thing.  I'm constantly writing about the 80's and 90's which essentially makes up a large part of my personal bump.

Today I figured I'd give you a quick glimpse (sort of a CliffsNotes version) of my reminiscent bump as it relates to my collecting history.  Someone had suggested that we turn this into a Blog Bat-Around and I couldn't agree more.

So without further ado, let's take a trip down memory lane...

1981:  The first baseball cards packs I remember opening were 1981 Topps, Donruss, and Fleer.  My parents bought the 1981 Fleer baseball set for me on a trip to Seattle.  It was the first of many.

1982:  Within a year, I had discovered a few other kids in my neighborhood who collected cards.  I remember trying to collect as many player pairs (regular base card + in action card) from the 1982 Topps set as I could. 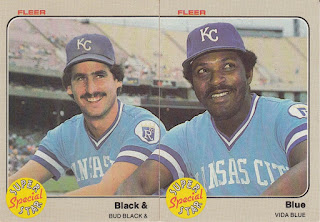 1983:  1983 will always be the Year of the Tony Gwynn Rookie Card to me.  However back then, I was much more interested in the cool Fleer Superstar subset cards... especially the puzzle ones that required you to track down the missing half.

1985:  Although I was still collecting baseball cards in full force in 1985, I remember going through a Garbage Pail Kids phase that was inspired by my cousins who also enjoyed collecting them.

1986:  Convincing a good friend of mine to steal a box of 1986 Topps and getting caught was one of the darker moments on my hobby timeline.  If you're bored, you can read about the story here.  While we're on the topic of thievery... Vince Coleman led the league in stolen bases in 1986 and this rookie card was pretty popular.

1987:  This year marked the beginning of a new era.  My collecting focus shifted from having fun to making money.  I can still remember sitting down in my family room ripping open boxes of 1987 Topps purchased from Costco/Price Club and building sets and player lots.

1989:  My junior year in high school, I worked at Thrifty's Drug Store.  They had a ton of 1989 Bowman baseball, which I purchased with my employee discount.  It's a shame we didn't sell any of the inaugural Upper Deck product.

1990:  A new decade brought on lots of changes for me.  I graduated high school and started college.  Plus I landed my dream job at my local card shop.  This experience opened my eyes to football, basketball, and hockey cards.

1992:  1992 Fleer Ultra was my personal Money Pit.  It's a good thing that I had an employee discount, because I spent a lot of money building a master set (w/o the Gwynn autographs).

1994:  When 1994 Signature Rookies Draft Picks guaranteed an autograph in every pack, it changed card collecting for me.  I bought a ton of this stuff and have been collecting autographs ever since.

1998:  This was my first year of teaching full time in a public school district.  It also marked a huge collecting shift for me.  Baseball was no longer a priority.  Basketball became my sport of choice.

1999:  Pokemon takes my classroom and the rest of the school by storm.  It also helps me get a job at the card shop located across the street from my work.  I'm able to bring the LCS new business and they're able to give me discounts on unopened product.  It's a win/win situation.

2001:  I sold off the bulk of my collection and left the hobby.  It might have been one of the hardest things I've ever had to do, but it was the right decision.  Unfortunately... I totally missed out on the Ichiro and Pujols rookie card craze.

2008:  Teachers in my district reach the top of the salary schedule in their 12th year, so by 2008 I was doing pretty well for myself in regards to finances.  It was the perfect time for me to return to card collecting.  That's part of the reason the 2008 Topps design remains special to me.

2010:  I'l wrap up this trip down memory lane with the creation of this blog.  Like I mentioned earlier, one of my goals is to use it to document my collecting history.  After two years of busting a bunch of boxes, I've started focusing on singles.  That trend has remained stable over the past eight years.

One of the singles I purchased during that period of time was this beautiful Jackie Robinson card.  It took me a few years of seeing it everyday on Night Owl's blog header, but I eventually got my hands on one.

A huge shout out to Greg for inspiring this post.  It really gave me a chance to sit down and piece together a personal hobby timeline.