I was around during the 70's, but the vast majority of my childhood memories take place during the 80's.  That applies to my collecting history as well.  Is there a chance that I cracked open some 1978 or 1979 Topps baseball packs back in the day?  Sure.  But if so, I don't remember them.

I do remember messing around with my 1981 Fleer baseball set that my parents bought me.  I also remember opening 1981 Topps and Donruss packs.  In short... 1981 was pretty much my Big Bang baseball card collecting moment.  It wasn't long after that I started chasing down rookie cards.

That trend lasted throughout the 80's and into the 90's with brief spurts here and there leading up to the present.  Although autographs are my main focus these days, I still enjoy going back to my roots and picking up rookie cards every now and then.

Today I'll be showing off my five favorite rookie cards from the 80's.  Before I begin, let's address the elephant in the room.  Yes... I decided to include Topps Traded and Fleer Update cards.  I understand that some collectors don't consider these to be official rookie cards since they weren't pack pulled.  Unfortunately... this is my list.  My List = My Rules.

That being said... I didn't include minor league cards on my list.  There's only so much controversy I can handle in one post.  That being said, let's do this... 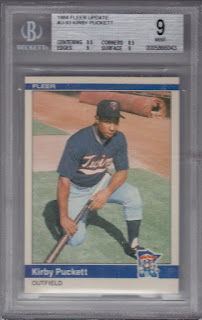 I always considered Puckett the American League version of Tony Gwynn.  Both were a little fluffy.  And both could hit for average.  It's a shame both passed away way too early.

Dave Stieb is one of the greatest players in Toronto Blue Jays franchise history.  He had the 2nd most wins in Major League Baseball during the 80's and was a 7x AL All-Star.  Yet he's often overshadowed by guys like Orel Hershiser, Dwight Gooden, Nolan Ryan, and Roger Clemens.  But not by me.  Stieb was one of my favorite pitchers back in the day and a fellow Oak Grove High School alumni. 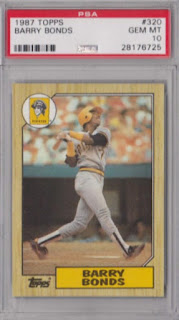 If it weren't for my two favorite baseball players claiming the #1 and #2 spots, this card would be my favorite.  It features two things I really, really love:  the 1987 Topps design and a well cropped action shot.  Throw in the fact that he's one of the greatest hitters of his generation and this card is a winner in my book. 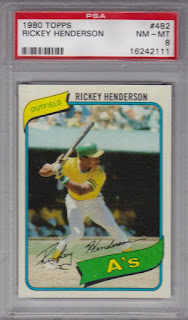 Had the Oakland A's never traded Rickey to the New York Yankees on December 4th, 1984... it's highly likely that he'd be my favorite player of all-time and not Tony Gwynn.  Like most A's fans during the early 80's, I worshipped #35.

The trade changed everything, but he won me over again in 1989 when he helped the Athletics win their only World Series Title in over four decades. 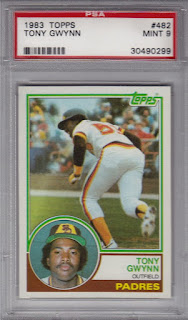 This card features my favorite player and my favorite 80's card design.  If you didn't foresee this card being in the #1 slot, then you're probably not a regular to this blog.

I think it's pretty cool that the Gwynn and Rickey are both card #482 in their respective sets.  It's like the Baseball Card Gods did this on purpose for me.

Well there you have it.  My favorite rookie cards of the 80's.  A huge thank you goes out to Kin over at Bean's Ballcard Blog.  His I Love the 80's post inspired me to create this list... as well as my My Favorite Baseball Card Sets of the 80's list I published last week.

I'm debating about creating two more 80's lists:  Favorite Oddball Sets and Favorite (non-rookie) Baseball Cards.  I already have a few ideas for each of these lists, so we'll see.