Today marks the 30th anniversary of John Hinckley Jr's assassination attempt on President Ronald Reagan. I remember seeing the news reports and listening to my mom and dad talk about it at the dinner table. At the time, I was more concerned that someone tried to kill another person... than the fact that it was the President himself.
Over the years the event has taken on a new meaning for me. I grew up in a Republican household and my parents are huge admirers of our 40th President. Then... in college I learned more about his impact on our economy and some of the "not so glorious" things that took place during his term in office.
Love him or hate him, President Reagan is a part of our country's history... including my own family's history. Which is why I decided to build a small PC dedicated to him.
First up... my two Garbage Pail Kids cards that have been in my collection since the 80's. 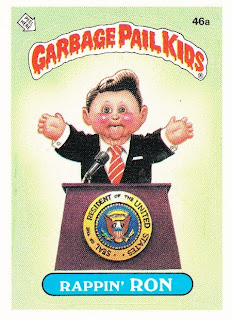 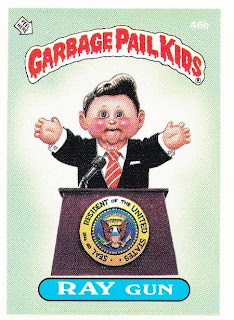 These are from the series 2 which were released in 1985. They've faded a little, but they're still one of my favorite things from my childhood.
The second addition to my collection was his card from the 1985-86 Star Lakers Champs set. 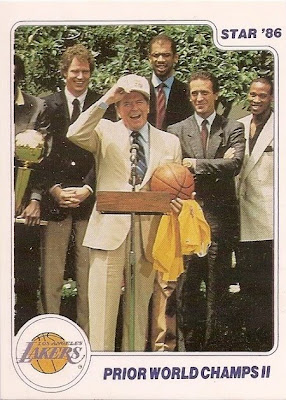 I wanted this card since the first time I saw it... sometime in the early 90's... but didn't actually acquire it until this past year. I love how it combines two PC items into one card: The Los Angeles Lakers & President Ronald Reagan.
The next acquisition was this 2009 Philadelphia National Chicle insert, which I grabbed online for $1.00 shipped. 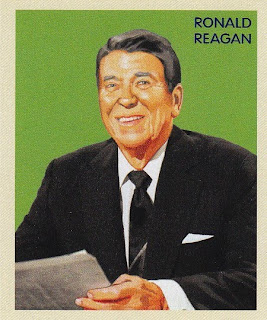 I'm a huge fan of the whole retro-look and that's what Chicle is all about.
Speaking of retro... a couple of months ago, I picked up several sets of 2009 Topps American Heritage Heroes to use in my classroom. One of these days, I'll get around to reviewing the set... but today I'm focusing on President Reagan. Here's his base card from the set. 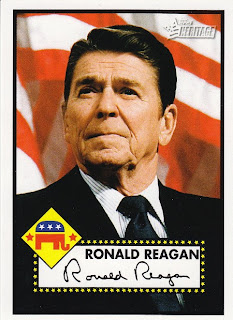 This card is definitely a classic. I like Topps' decision to use their 1952 baseball card design for this card. It features a great photo of President Reagan along with our flag in the background.
The final piece in my collection is my sheet of 2011 Ronald Reagan commemorative stamps. I originally heard about these in February and was excited to see them at my post office two weeks ago. I picked up a couple of them... one for my collection and the other to use. 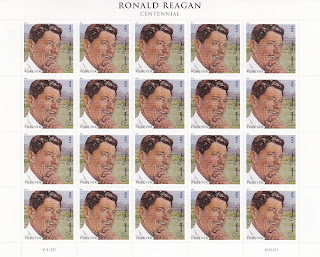 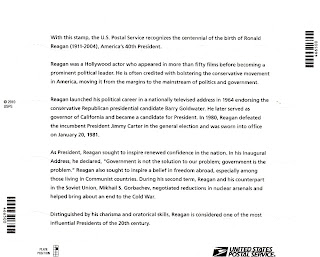 This isn't the first time President Reagan has been featured on stamps. He was also honored in 2005 and 2006. Both feature the same photo. The only difference is that the 2005 version is a 37-cent stamp and the 2006 version is a 39-cent stamp.
Well...that's it so far. It's not a PC that I'm aggressively collecting. But if I see a card that I really like... I'll pick it up. I know that some people aren't huge fans of President Reagan, but the fact is he will always be a major part of my childhood memories as well as a popular politician in my parent's eyes. Therefore... this collection holds great sentimental value to me.
I'm glad I was able to post this topic on the anniversary of such a historic day. Unfortunately, President Reagan passed away in 2004, but he lived a long life. In a couple of months he would have celebrated his 100th birthday.
Happy Wednesday everyone... only two more day until the weekend. Sayonara!
Posted by Fuji at 5:34 PM

I can still remember that day when "the Brady Bill" was created. I've always admired Reagan, from his days as an actor right up until the day he passed. He did so much for our country and is one of very few political figures that I would have loved to have met in person. Nancy is also one of the first 1st ladies that I can remember being readily recognized for her contributions, both to her husband's office, as well as to the country.

I'm loving the 09 American Heritage with the flag, if you run across an extra one let me know.

dawgbones - I forgot to mention his acting days... I guess it was a little before my time, but that's another thing I remember my parents mentioning when I was younger. And who can forget Nancy's "Just Say No" campaign.

John Bateman - Yeah... this is the only Star card featuring Reagan (that I know of) I picked up the set for this card... the rest was just a bonus.

BA Benny - I might be giving away one of my extra sets in a contest... but you'll have to wait until this summer. It's too hard to run my contest during the school year.