I've been collecting Japanese baseball cards for a couple of years now... but last weekend I added a twist to my collecting habits. I've decided to start collecting unopened Japanese baseball card packs.
The idea popped into my head after I recently received my order from Yakyu Shop, which is a store that specializes in Japanese baseball jerseys, caps, and cards. I purchased one of their Fukubukuro bags, which contain 40 random packs for $40. Out of the forty wax packs, thirty-two of them were different.
At first I was planning to pop them open... but I realized that I wouldn't really have any idea who was good and who was bad. So... I decided... what the heck... it'd probably be more fun to collect the unopened wax packs. After resisting the temptation to bust some wax... here's my collection:

I'm hoping to add to this collection soon, since I just ordered another bag. Unfortunately the shop is closing its doors on March 24th after being in business for eleven years. So I probably won't be able to secure many more in the future. My parents go back to Japan every other year, but they can't always find packs for me. And even when they do... it's only one or two packs.
As for the other 8 wax packs... I popped them open. My student is going to take the wrappers in make a wallet out of them for me. I wasn't able to recognize any of the players... but I figured I'd share my two favorite cards from the bunch: 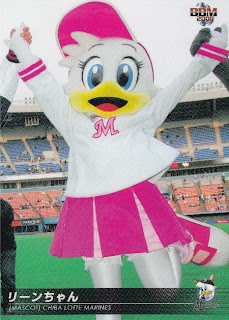 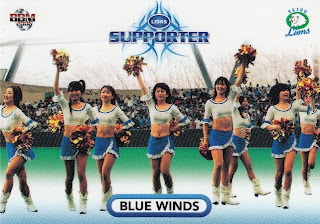 Seibu Lions Cheerleaders
So what about you...
Do you have any unopened wax packs in your collection?
Besides these... I have a couple of 1983 Fleer baseball wax and cello boxes. I probably have a few more... but I can't remember what they are off the top of my head. It's been a long day... and I'm having a brain fart... guess it's time to get ready to hit the sack.
Have a happy Friday... Sayonara!
Posted by Fuji at 7:24 PM