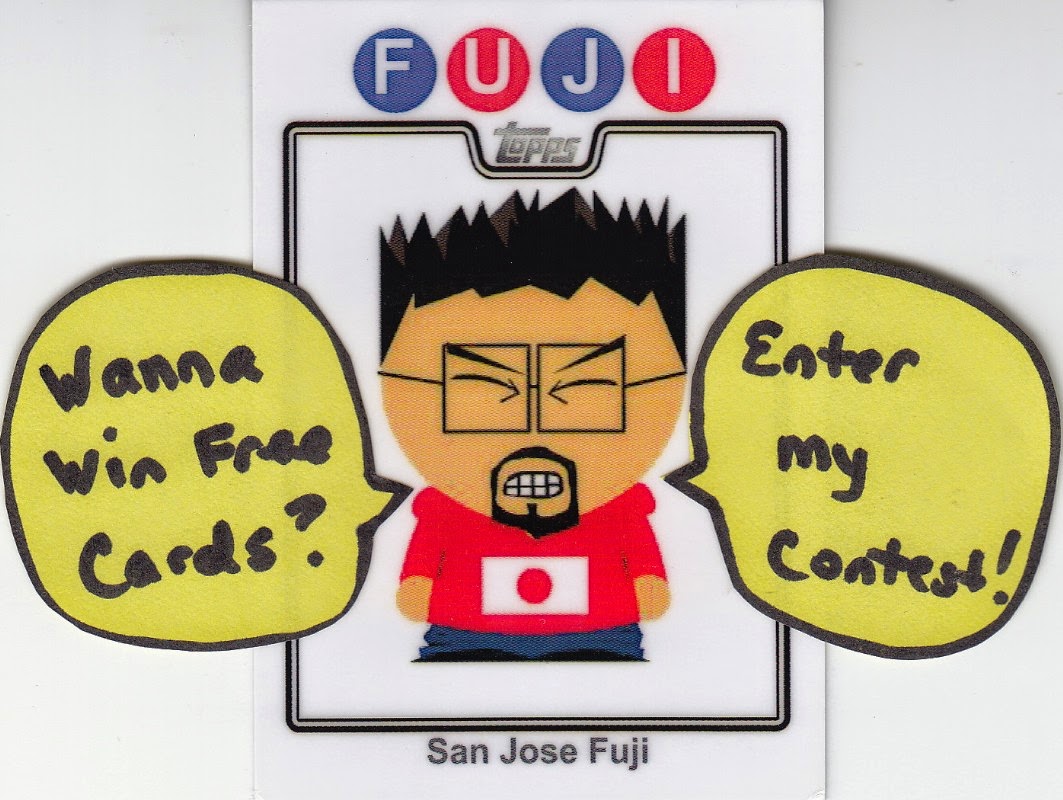 Yesterday, I published the thousandth post on this blog and figured the best way to celebrate would be to hold a contest and give away some cards.  It's my way of saying "thank you" to all of you who have supported this blog over the years.

There will be four prize packages totaling 1,000 cards... given away to four contest winners.  Each package will contain a sports card lot catered to the winner's favorite team(s).  I will try to include autographs, memorabilia cards, oddballs, inserts, rookie cards, and of course base cards in each prize package.

Okay... now that we've established the prizes, it's time to address the contest details:

How do you enter and participate in the contest?  If you're familiar with my past contests, then you know it's all about earning contest entries by responding to my blog posts.  Confused?  I'll break it down for you...

There are three ways for you to enter.

#1 - Leave a comment below for one entry.
#2 - Plug this contest on your blog for THREE bonus entries.
#3 - Leave comments on my posts between now and June 7th.

If you plug this contest on your blog, I will add your name three additional times.

And as a final bonus, I will randomly select four posts during the contest time frame (excludes today's posts) using www.random.org.  Anyone who leaves a comment on any of those posts will have their name added to the randomizer two additional times.

That means if the stars are aligned for you, you technically could receive a total of twelve contest entries.

Let's kick things off with today's question of the day:


What sports teams/players do you collect?

I look forward to reading your responses over the next 1,000 hours.  Happy Saturday and sayonara!
Posted by Fuji at 3:00 PM

Awesome contest. Big fan of your flea market finds. I collect my big 4 teams Cowboys, Suns, L.A. Kings and Yankees. I will also grab non-sport celebrity stuff if interesting enough along with 90's wrestling. Thanks again for the contest

Congrats again and thanks for the contest! My main collecting focuses right now are 1973 Topps (bout halfway completed my set), any card serial #'d 12/25, players named Gavin, and glow-in-the-dark cards. I'm a Padres fan and collect San Diego HOFers and various guys I like from the team's history. A specific card I collect copies of is 1990 Upper Deck Marquis Grissom.

Congrats again Fuji and I love the contest! I am almost entirely a hockey guy, I collect Alex Delvecchio, Brett Connolly, Ryan Ellis and Adam Henrique. I am also a huge Parkhurst fun and I am trying to build a set a year from 1910 until present day. I do cheer for the Tigers and 49ners too. I also have pimped this out :)

I still have a ways to go to get to 1000. I still love the Mariners, Padres, Sharks, Super Bowl Champion Seahawks( that still feel good to say!), and Sounders FC. Congrats on getting to this milestone!!

Cool!! it's sort of a mini-summer Fuji blast!! You know I'm a Phillies superfan, collecting pretty much anybody from that team, past or present. I collect players that wear the number 7 and those shown wearing the number 17. I also like Michael Waltrip racing and Women's Championship Midget Curling.

I collect any player who every played for the Cardinals, Nomar Garciaparra, and more recently I've started seeking out Bo Jackson cards.

Congrats. I"m all about the Nationals and Orioles.

Congrats on keeping this going to 1000 and beyond. I collect pirates, Red Sox and ryan vogelsong. Pitt panthers alum. Eagles and 49ers. Mavericks and 76ers. Thanks

Congrats on 1000 posts. I collect sets, so I collect all teams and players.

Oh yeah, and I collect Tigers and Cal and Pudges and catchers.

Congrats! I collect the Cardinals/Lance Lynn/Joe Kelly. Thanks for the contest.

Congrats on 1000! I don't think I've ever commented her before, but I have been reading for quite some time. Great job.

As far as collecting goes, gimme Matt Kemp or pretty much any Dodger, I love them all.......well, maybe not Andruw Jones.

congrats on the milestone. Hope to enter your 2000th post contest as well.

I collect Dodgers and Hall of Famers. Thanks for running a contest, Fuji.

Congrats again on 1000! Thanks for the contest!

Can I win for something for the longest reply?

Congrats on the 1000th post. Love your work, and hope I get to read the next 1000 being I missed most of the first 1000. My players, and teams are
Mike Trout - Wilin Rosario - Mark Teixeira - Mike Zunino - Juan Nicasio - Kyle Seager - Justin Smoak - Nolan Ryan

Not much of a team collector, but a set builder for the sets I like the look of. My teams are the Colorado Rockies, and Seattle Mariners. Also love to collect me some pocket schedules, sports teams business cards, and any other cool sports stuff along the way much like yourself.

Congratulations on Post #1000, Fuji. Your blog is one to which many of us aspire in terms of its clear writing, interesting subjects, and pure fun to read.

I just added a promotion of this contest to my little 100th post: http://offhiatusbaseball.blogspot.com/2014/04/post-100-this-is-it-so-lets-get-it-out.html

Of course, I'm a Brewers fan and collect all Brewers stuff, but with a focus first and foremost on Robin Yount. I'm also a big Gary Carter and Paul Molitor fan too, with Jonathan Lucroy and Jean Segura being my favorites on the current team.

Congratulations again, and thanks for stopping by my blog from time to time too.

Congrats on a huge milestone. That's pretty cool.
I'm 99.9% baseball and Rangers. I like catchers and play at the plate cards too. I also collect Will Clark, Joe Mauer, Johnny Bench and Carlton Fisk.

Fuji I'm in here is my comment and below is a link to my plug. Thanks for the contest. Dion

Congrats Fuji, you are awesome and you should be very proud of your blog!

Thanks for the blog and the contest!

1000 down. What an amazing experience for all of us. Cheers! Posting your contest on my blog now.

I think the prize should be 1000 custom made fuji cards!

Congrats on 1000!!! I collect Mets and WVU Mountaineers and here is my plug for your contest. http://thehomerunapple.blogspot.com/2014/04/a-fuji-contest.html

Congrats on the thousand! If you add up everything I've written for every blog I've been part of, I'm not sure it gets to 1000.

I do vintage hockey, baseball and soccer - OPC if it exists, whatever else if it doesn't.

A thousands posts... congrats! I'm still trying to get to 100. I'm a big Pirates fan, so most of my money goes to collecting current players. I also dabble with random football and basketball cards.

Thanks for the contest!

Congrats on 1000, am a Red sox fan collecting Roman Quinn, Bill Mazeroski, Chris Getz. Glad to see all is well.

Thanks for plugging the contest!

That might be the longest reply in the history of my blog!

Thanks Cat! I appreciate you taking the time to plug Tony's contest... and of course my contest. Best of luck!

i collect dodgers, plus any and all cards featuring steve garvey, ron cey, bill russell, or davey lopes as well as other members of the 1978 topps team like tommy john, lee lacy, rick rhoden and charlie hough.

Thanks for plugging the contest and keep up the great blog!

Thanks Dion! Appreciate you spreading the word.

Thanks for plugging the contest!

That would cost me an arm and a leg... plus not sure anyone wants 1000 copies of my card. I will make sure that each of the winners gets one thrown into their package.

Thanks for helping me out and supporting the contest!

Thanks Nathan! Appreciate you plugging the contest!

Fuji, Congrats on 1 k in blogging posts. Your passions about cardboard is inspiring. Good luck.

Congratulations on your 1,000 post.
I have pugged your contest:
http://packwar.blogspot.com/2014/04/a-fuji-tastic-contest.html

I don't know how I missed this one, but I'm glad I made it in. I mainly collect any and all Rockies, but I also collect Topps rookie cups and pre-John Calipari former Kentucky Wildcats (from Sam Bowie to Patrick Patterson) in the NBA.

Congrats on 1000 posts! I collect Cubs and Bulls cards, with some Bears here and there, but I'm a quasi-set collector who likes to buy packs and roll the dice to see what I get. As for players, I guess it would be Michael Jordan, Andre Dawson, Greg Maddux, and Ryne Sandberg. Thanks for the contest!