My name is Fuji and I'm a bobbleholic.

Do you suffer from this disorder too?  Well if you have ever purchased a bobble head of Mr. Mint and he's not a relative or family friend, then the answer is definitely "yes".

If you're not familiar with Alan "Mr. Mint" Rosen, then I encourage you look him up on the internet.  No spare time?  No problem.  I'll summarize him in twenty-two words.  He's the card industry's version of a used car salesman, who is the self proclaimed most recognized figure in the (card) industry.

Personally... I'm not a fan of arrogance, nor am I a fan of Mr. Mint.  So why the heck would I buy a bobble head of him?  Let me repeat myself... I'm a bobbleholic. 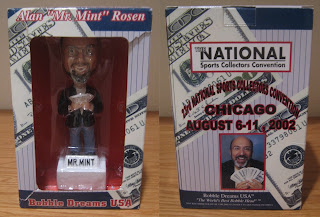 From what I've read on the internet and on the box, these were given out by Mr. Mint himself at his table in 2002 at The National in Chicago. 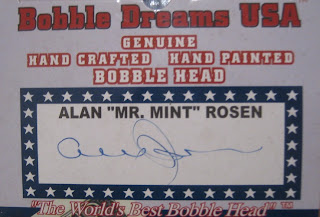 As a bonus, he even autographed the box.  Well... at least I assume it's his autograph.  And if that wasn't enough, there was even one of his baseball cards inserted inside of the box:

Not bad right?  Especially when it's supposedly:

Maybe I should start proclaiming myself as the author of The World's Best Chubby, Japanese-American Sports Card Blogger in the Bay Area Who Owns The World's Best Bobble Head.  Nah... who am I kidding?

The real question is...

If you owned a bobble head of this guy, what would you do with it?

Blow it up?  Use it as a paperweight?  Draw tattoos on his head?

Seriously... I have no idea what I'm going to do with it.  But one thing is for sure... I have no buyer's remorse, because my name is Fuji and I'm a bobbleholic.

My name is Josh and I'm a bobbleholic.


Not sure what I would do with that thing...but I gotta say, I love this one! Spiegel, of Nomo's Sushi Platter fame, and myself, love these strange, novelty bobbles. We both have small collections of these types of nodders.

Good Old Mr Mint- it used to drive me crazy seeing his full page ads in the SCD. If it (Mr. Mint Bobblehead) were mine, I'd use it for target practice. But that's just me...

Nice purchase. Shoot, I even have a bobble of myself in my collection. The odder the better.

I'm not a bobblehead collector by any means, but I have three. An generic Yankee bobble head I bought in the early 1990's that's had the neck superglued together a few times over the years. A Curtis Granderson that was an SGA at Tigers game I went to, and a Wallach. The Yankee is the only one not in a box.

If I were given one of these, and assuming I actually took it, my OCD would probably keep me from tossing it without first putting it up on ebay. Especially after just hearing that one of them sold for $6.75.

I'd run my car over it. He was beyond annoying back in his heyday.

One of these days, I'll have to have a custom one of myself made.

Glad to see I'm not alone.

I figured this would be a sort of love it or hate it piece. I'm still having a difficult time figuring out which way I'm leaning. Hate the guy, but love bobble heads.

Awesome! If I ever come across one of these at a reasonable price, I'll definitely add it to my Expos PC.

My name is Mike and I'm a bobbleholic. But I wouldn't own a Mr. Mint bobble. I've seen him in action at a couple of card shows. Very shady character.

Yeah... I saw a YouTube video where he took advantage of this older guy.

Hi to all,I am newbie to the discussion.I like to share about the best provide AmericanBobbleheads.com.For more information:Best American business bobblehead!