When: Saturday, May 5th
Where: De Anza Flea Market
What: Comic Books & Comic Book Magazines
How Much?: $6
My new monthly gig is setting up with my buddy Mike at the De Anza Flea Market as a vendor. However this month, we weren't able to reserve a spot.
So yesterday, I ventured out there on the opposite side of the table for the first time in several months. Unfortunately, there wasn't much in the area of sports cards or sports memorabilia. But I didn't leave empty handed.
I came across a guy who was selling a bunch of action figures and Legos, so I stopped to see if he had any SLU's or McFarlanes. Instead, I found several boxes of comic books. Usually, I wouldn't bother even digging through them... but sitting on top was this Amazing Spider-Man #365, which features a shiny hologram on the cover: 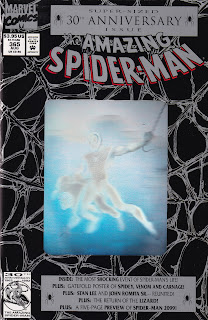 Well... you know me, I'm the guy who's attracted to shiny objects... especially when they're holograms from the 90's. Here's what my hunt for holograms turned up:
Web of Spider-Man #90 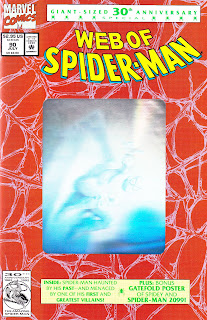 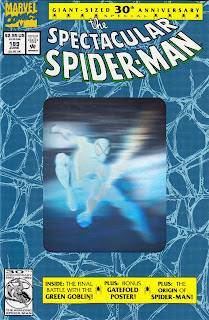 Plus, I found the first issue of McFarlane's Spawn comic: 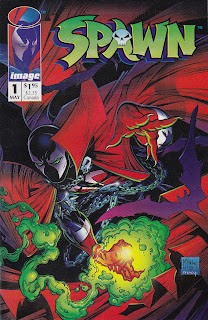 It's not the first time I've purchase a copy of this comic... and for some idiotic reason, it probably won't be my last. In the early 90's, I temporarily ventured into comic book collecting and purchased a ton of Spawn #1. The shop owner explained to me that this would be a great investment piece. It's a shame that millions of other had the same idea, because McFarlane let the printing presses run. He sold 1.7 million copies of that issue. Talk about overproduction in the 90's.
And finally, I picked up two issues of Wizard (Beckett for comic book collectors?):

Who doesn't need cheap, bathroom reading material? Especially when they contain trading cards.
Do you read comic books? If so, which ones?
I'm not a huge comic book person, but right now I'm in the process of reading The Walking Dead Compendium Vol. 1. If you're a fan of the television series, I encourage you to pick this book up. It contains the first 48 comic books in the series and is one of my greatest purchases.
Happy Sunday everyone. Have a great week... and sayonara!
Extra Edition
This morning I went out to the Capitol Flea Market, walked around, and made two purchases.
Purchase #1: Two Riddell Mini Baseball Batting Helmets $10 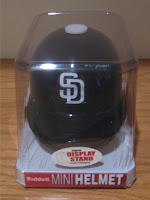 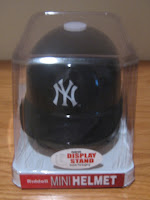 I really only wanted the San Diego Padres helmet, but he wanted $6 for one, or $10 for two. So I grabbed the New York Yankees, because I figure I can flip it next month at De Anza for what I paid for the pair.
I've already taken the Padres helmet out of the package and added it to my shelf: 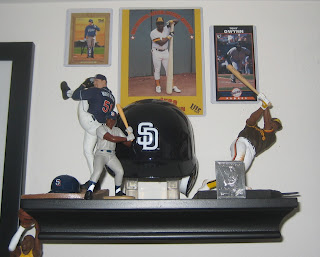 Space is limited, so unless it's tiny, I won't be adding anything to this shelf anytime soon.
Purchase #2: Schutt SJSU Authentic Mini Helmet $5 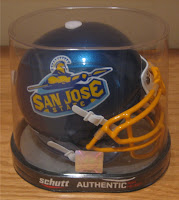 The mini helmet gods must have been smiling down on me, because less than 15 minutes later I had acquired this sweet mini helmet from my alma mater. Go Spartans!
Posted by Fuji at 4:00 PM

Never have read a comic book. Not my thing. But I do love holograms!

I read comics, although nowhere near as much as I did 5-10 years ago. It's gotten to be like the NHL: Everything's about the fighting.
One recent title which I've enjoyed is "RASL" by Jeff Smith, the same guy who did "Bone". It only comes out 3-4 times a year, and it's fairly close to wrapping up, but it's the one title I've enjoyed consistently.
I watch "The Walking Dead", but I've yet to read the comic... Maybe after I've defeated this large stack of unread-but-paid-for comics...

Oh, don't cheapen the greatness that was Wizard by comparing it to Beckett. Even it Beckett's height (and I'm not entirely sure when that was), it was never 1/10th as entertaining as an issue of Wizard. Perhaps that was a by-product of the age of the target audience. Wizard was targeted mainly at the 14-25 yr old (mostly male) demographic. Sports cards, at least in the 80s and early 90s, seemed to target kids and older collectors, but pretty much left out that very same comic book demographic. Sports cards magazines always had that odd mix of articles for beginners (how to get autographs, different ways of collecting, etc.) and articles for older collectors (reconstructions of 1950s uncut sheets or oddball food-issue finds from the 1930s), but there was very little content that was just FUN.

Wizard, and by extension Toyfare, always seemed about A) entertaining the readers and B) covering the latest news in the hobby. Don't get me wrong, I love old sports card hobby magazines, but the only fun to be had is mainly in the nostalgic sense.

I've heard about the tombstone issue of Amazing Spider Man. If I found it for a buck, I'd definitely grab it. Same thing goes for both of those Wolverine issues... they sound awesome!

I've never heard of RASL... but I remember Bone. I remember they were pretty popular in the 90's too. I might even have an issue or two.

I'd wholeheartedly recommend The Walking Dead. I love comparing the TV show with the comic. It's good stuff.

Lol... sorry about that Jason. I take it back. Wizard > Beckett. Both are excellent toilet bowl reading IMHO. I'll even pick up a Toyfare and Non-Sports Update from time to time.

The guy also had a Robin hologram cover... or was it lenticular? Anyways, I would have picked it up, but it was used and abused. As for Batman, I'm a huge fan of the character and the new movies... but never read any of the actual comic books. Maybe one of these days.

I think Valiant's Turok #1 was the first comic I ever saw to introduce the Topps Finest style foil on the cover. It was nice that all of the initial group of titles that Image launched with were just before the cover insanity, so Spawn, Wildcats, Pitt, The Maxx, Wetworks and Savage Dragon #1 all came out with normal covers and people actual READ them! The same can't be said for a lot of the gimmick covers that followed.

I know I never actually got around to reading X-Force #1 until it had been reprinted for fear of busting open the poly-bagged first edition that included a trading card (I think it was 5 different trading cards....so everyone "had" to buy 5 identical copies of the comic to get one of each card...MADNESS!).

I remember those X-Force bagged comics. Can't imagine how many of that issue was produced. I'm pretty sure I have the set somewhere... if not, I need to get my hands on that Deadpool card.

You're right about the gimmick covers. I wonder what percent of gimmick cover comics have actually been opened and read... my guess is the number is pretty low.