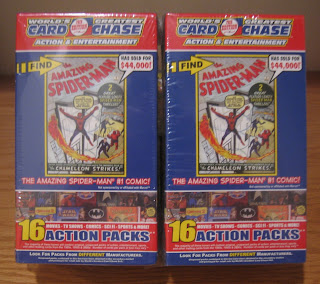 The Product: Two Boxes of 2009 World's Greatest Chase
The Purchase Price: $5/box = $10 = A Nice Meal @ Baja Fresh
The Contents: 16 Action Packs Per Box = 32 Packs of Cards You Normally Wouldn't Buy
Kudos to whoever designed the box for this product. I rarely buy packs or boxes anymore, but I was drawn to the Spiderman comic on the front of the box... and with a little encouragement from Max (who was selling these) at the Great Mall card show, I picked them up.
I figured at $5/box, how could I go wrong? That's less than $.16/pack. I mean... at that moment in time, I felt like the box should have said... 2009 World's Greatest Deal.
Well... I was wrong... and the fact is... you get what you pay for. But I have nobody to blame, except myself. Yep... I'm the buffoon!
World's Greatest Card Chase did an excellent job of advertising their product accurately. They promised 16 action packs, which were defined on the box as either movie cards, TV show cards, comic cards, sci-fi cards, or sports cards.
And that's exactly what I received. Here's a breakdown of what the two boxes contained: 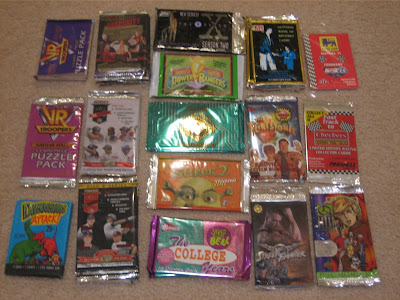 Nothing spectacular, but at least I'm able to add a few more packs to my Non-Sports Wax Pack Collection.
Happy Tuesday... and sayonara!
Posted by Fuji at 3:00 PM

Don't care for Power Rangers but the Guiness Book of World Records cards are actually pretty cool. I bought an unopened box at an antique mall, got a complete set and still have 10 packs (gave away a couple more).

They made Saved by The Bell cards?!? No idea! Awesome!

Saved by The Bell: The College Years? How did I miss that show? Wait, I am not at all sad about missing that show.

I was tempted to bust a pack of these open, but someone already did it for me on A Pack To Be Named Later.

I had no clue either... I considered busting a pack of this too, but never saw The College Years, so I passed. Although, who wouldn't want a Screech or Kelly Kapowski rookie card ;-)

I gotta say that this product is AWESOME! Ok, ok...maybe not the greatest packs, but for the price and the entertainment value, my students would flip! And the lesson ideas I can pull from a pack of Power Rangers cards!!!
"Who wants to practice colors?"
Heck, even Saved by The Bell cards for my adult students. Fashion, trends, TV from the early 90's. I might have to pick up a box next time I'm back State-side :)

Sad to say I own all the dvd sets including the College Years as bad as it was, lol!

Don't feel bad... my buddy bought me the 4 disc copy of Punky Brewster: Season One. Ah... the memories.

That's pretty creative... never thought about using them in my classroom. If you come to the Bay Area, I'll put you in touch with a guy who has a ton of this stuff for $5/box.

i love this box. i just ordered 30 boxes. im a crazy man who loves to open packs from vintage cards packs