Happy Labor Day everyone!
This past week has been crazy. I can't remember the last time I was so busy. Since last Monday, I have gone out to dinner every night with the exception of Friday... and there have been a couple of lunches too. It was like a week long birthday celebration and it carried over into this weekend where there were two flea markets... in two days... with two very different experiences.
When: Saturday, September 3rd
Where: De Anza Flea Market
What: Non-Sports Cards, SLU's, a Bobblehead, & a Boba Fett
How Much: $42
On Saturday, I went to the monthly flea market at De Anza with a buddy of mine. The weather was nice and the place was packed with both customers and vendors. It was the most people I've seen in a while and there were collectibles scattered here and there throughout the flea market.
However, I didn't want to keep my friend waiting... so I ended up rushing through the rows and finished in record time. It's probably a good thing though... because it's not like I need to spend anymore money on stuff I don't really need.
But in the end... I was still able to pick up a few things from several different vendors.
Purchase #1: 1994 Marvel Masterpieces "Silver Holofoil" Set $5 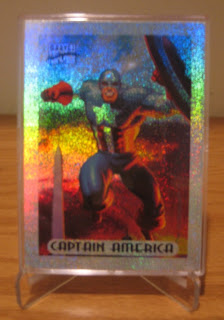 There's a vendor there that specializes in non-sports cards and I so wanted to look through his stuff. But my buddy had walked ahead... so I quickly sifted through a box that contained insert sets. I inquired about several hologram sets from the 90's, but he was looking for a little more than I wanted to spend.
Then I came across this cool looking set, which I'll feature in a future post. It has 10 cards and includes some of Marvel's biggest characters. I figured for fifty cents a card, it was money well spent.
Purchase #2: 1992 Impel DC Cosmic Cards Set $2 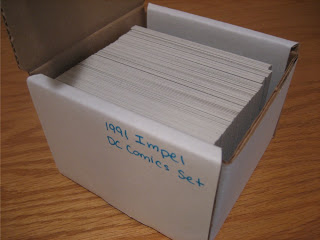 When it comes to comic books... I prefer Venom, Deadpool, and Wolverine over Superman, Green Lantern, and Flash... but $2 for a 180 card set is too good of a deal to pass.

My friend asked what I planned to do with it and I told him I wasn't sure. It's not like I plan on reading the card backs or anything... but I just felt it was just too good of a deal to pass up.
Purchase #3: Two Kenner SLU's & a Bobblehead $15
The guy I typically buy my figures from finally came with a new batch of products. So it didn't take me long to find some stuff I wanted to add to my collection.
Before I break down the purchase, I should explain that the price I paid is based on the fact that I also purchased some Star Wars stuff too. Without the SW stuff, he wanted $30... which I probably would have walked away from. 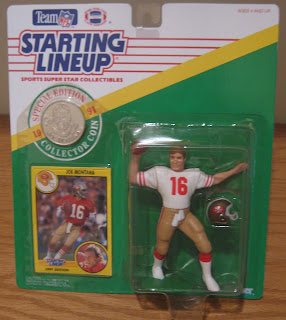 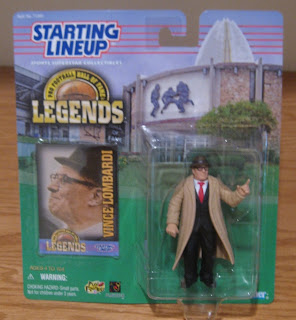 The two SLU's are a 1991 Joe Montana and a 1998 Vince Lombardi. I might already have the Montana in my collection somewhere, but at that price & condition I didn't want to risk passing it up. As for the Lombardi piece... I've never seen this figure before and it's awesome. My only regret is that I didn't buy both of them... one to pop open and the other to keep sealed. Hopefully he'll have the other piece next month when I see him again. 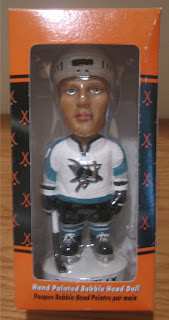 I also picked up a bobblehead of Owen Nolan, who at one point in my life was my favorite San Jose Shark. As of now, he's the only sports piece that I've freed from packaging.
Purchase #4: 1996 Star Wars Collector's Series 12" Boba Fett $20 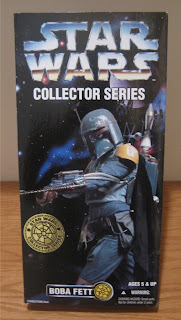 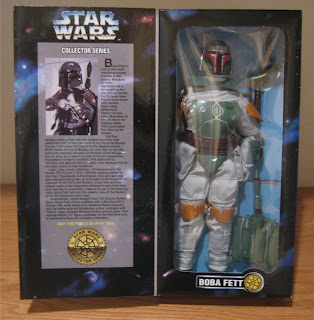 Okay so he cost more than my Obi Wan Kenobi & Luke Skywalker combined and out of the four 12" Boba Fetts I've seen... he's the least desirable. But he's Boba Fett and easily my favorite villain in the Star Wars Universe... Plus if I bought it, he'd throw in the three sports figures for $5 each.
My overall experience at De Anza was fairly enjoyable. The people are nice... they had a good variety of collectibles... and their churros are delicious.
However yesterday's trip to the Capitol Flea Market was a little different. Simply put... De Anza is a middle class flea market with crafts, collectibles, and a variety of other items new and used which are generally kept in decent condition. While Capitol is the ideal place to find used socks, dirty stuffed animals, and expired cereal. Between the two, I'd expect to find better deals at the later... however this weekend... that wasn't the case.
When: Sunday, September 4th
Where: Capitol Flea Market
What: A tour of a pretty cool junk wax era collection & an embellished history of sports figures
How Much: $0
I found several items I was interested in, but one of the vendors was a collector still living in the 90's and not reality... and the other guy... well... let's just say he was a little off on his facts.
Attempted Purchase #1: 7 Packs of 1995 Flair Baseball
The first guy I ran into had a huge collection of sports cards and figures. He had at least 5 display cases and probably 30 to 50 figures. In addition to that, he had cereal boxes, complete sets, wax packs, wax boxes, and binders full of star cards.
There were a few singles that caught my attention, but as soon as he said he wanted $5 for a 1986 Topps Traded Bo Jackson rookie... I realized he was looking to get half off the price on his stickers... which were over inflated beyond belief. Trust me... I spent 20 minutes... just admiring his collection to see what he had and there wasn't a single card priced reasonably.
Before I left, I did make him an offer on some wax packs. He had seven packs of 1995 Flair Series 2 baseball floating around in a bin, so I gathered them up and asked how much he wanted. The gentleman asked me to make him an offer, so I said $ and he chuckled. He told me they usually sell for $4, but he'd take $20 for the lot and I laughed. I guess at least we were able to entertain each other.
Attempted Purchase #2: 1995 Kenner SLU Sandis Ozolinsh
Later on, I ran into a guy who had a bunch of San Jose Sharks stuff. I think he purchased it from someone, because he didn't really know what he was talking about. He had a hat autographed by Patrick Marleau, Ryan Clowe, Joe Pavelski, and a few other current players... but he kept saying he got their autographs in the mid 90's.
Most of the stuff he was selling I already had... but I was interested in his 1995 Sandis Ozolinsh SLU, since it's the only Sharks SLU I don't own. So I inquired about it and he went into a 30 second spiel about how rare these figures are to find sealed and in great condition. After hearing an exaggerated Kenner SLU history, he said he'd take $10 for the piece.
Now 15 years ago... this price would definitely be a steal... especially in San Jose. And I won't even say his price is unreasonable... since it's probably what a card shop would sell it for. But I've picked up SLU's from this flea market for a buck before... and a day earlier I found two HOF figures in amazing condition for $5 a piece... so I was ready to trade a Hamilton for an Ozolinsh. Instead I offered him a Lincoln, but he wasn't interested.
Wait... I almost forgot. I did buy something. It cost me $1.75 to get into the flea market, so technically I purchased an admission ticket. What a steal... right? At least I got some exercise and a few laughs.
Before I wrap up this post and publish it... I did want to mention that there are no feelings of animosity towards any of the vendors I encountered yesterday. I understand that it's their items and they have the right to set the price as high or low as they deem fit.
I'm just wondering if they know what their items typically sell for... or if they even want to know.
Which leads me to today's question of the day:
If you purchased an item 15 years ago and over the years it lost most of its value, would you want to know its current market value or would you prefer to live in denial?
There's definitely some truth to the saying... "ignorance is bliss". But if I had to choose, I'd want to know the current value even if the information was painful. The fact is... less than 1% of the cards I own has held their value over the years and I'm okay with it. I've learned from my mistakes and today I collect differently. My only hope is that this new style of collecting will bring more joy and less regret in the future.
Have a great week everyone. Three day weekends are awesome! Not only do we get an extra day off... we also get a short work week. Sayonara!
Posted by Fuji at 8:10 AM

Market value is only important if you're trying to sell the stuff you bought 15 years ago. In that case, I'd definitely want to know so I could price it to sell.

Otherwise, it's worth whatever it's worth to me. Market value would be irrelevant.

I don't live in denial about my collections... I know that the minute i pay for something, that money is gone.

And I'm fine with that.

I don't mind knowing the value. I remember in the late '90s I pulled a McGwire insert that "booked" $80 at the time. As a 12 year old, I was pumped. The other day I checked the card on eBay and COMC and it was for sale for around $5.

I've always known I would never get book value for my cards. It's just one of those things that I learned early on when collecting. I think that was helped by selling at a flea market once in the early '90s.

I'd rather know straight-up what I can honestly get, if I was trying to sell, because I'd rather sell something for $1 than have it sit around forever with a $5 price tag on it.