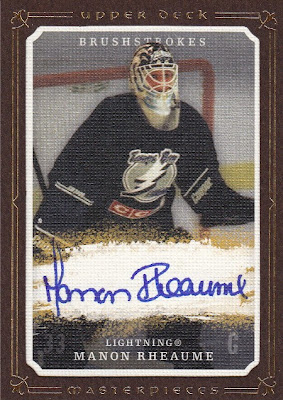 Happy Friday everyone... today I decided to introduce a new series of posts called Flashback Friday. The posts will cover pieces of my collection... but more specifically... items from the past. 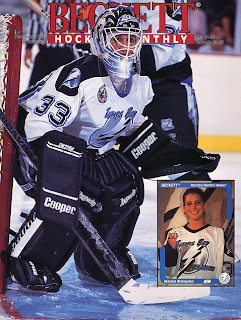 Today, the focus will be on one of the most popular female athletes to ever grace the cover of Beckett Hockey. And 19 years ago, she made hockey history.
On September 23rd, 1992, Manon Rheaume entered the history books when she suited up for the Tampa Bay Lighting and became the first woman to play in the NHL. It was an exhibition game against the St. Louis Blues and she faced 9 shots in one period, allowing 2 goals. 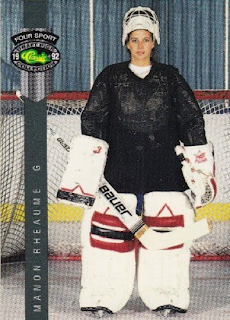 If you collected in the early 90's, then I'm sure you remember the event. Manon Mania swept the hobby industry as people chased down her 1992 Classic cards, including her first autograph which was randomly inserted into 1992 Classic Four-Sport packs.
I've always wanted that card and have periodically searched for it on eBay. But when I discovered her 2008-09 UD Masterpieces Brushstrokes autograph in May, I decided to pick that card up instead. It set me back $5.77 (+ $3 shipping/handling), which turns out to be a steal since the only one listed recently on eBay sold for $37 (free shipping), with a BIN option.
It seems that her most affordable certified autograph is her 1993 Classic Pro Prospects cards numbered to 6,500, which sell for $11 to $12 on eBay. Rheaume seems to still have a loyal following, because there were ten sales of $50 or more in the past ten days for her Panini and ITG autographs.
Fifty dollars for an autograph of a goalie who's never even played a regular season game? Well if you think that's expensive... someone just spent $449 (+ $3.25 shipping/handling) on a 2010/11 Panini Dominion "Black 1/1 Autograph". Insane right?
So... what about you?
Did you ever buy into Manon Mania?
If not...
What's the most unique trend you ever dove into?
I've fallen for a bunch of hobby fads... everything from Garbage Pail Kids to Pokemon cards. But I'll save those posts for another day. Have a good weekend everyone.
There's a local card show tomorrow and Sunday. I'm going to try to check it out at least one of the days. Hopefully I'll have a few things to share with you all. Sayonara!
Posted by Fuji at 9:53 PM

Wow, that Masterpieces card is a great looking one. I've got a bunch of the cards put out by Classic back when the mania was at its peak. I've thought about picking up an autograph, but they were selling for a little more than what I wanted to pay as you stated in your article. Her autos still sell for pretty good prices. You got a nice deal on that one.

Offy - yeah... it's pretty shocking that her autographs command so much. there seems to be more and more autographs of hers hitting the market, which can only mean values will eventually drop.