It's the last Monday in May, so today we honor and remember those who have given their lives for our country and our freedom. I've never served in the military, but several of my family members (including my father) and close friends have. I'm fortunate to say that none of them have been killed in combat.
However each year thousands of U.S. soldiers give up their lives to serve our country and it's important that we never forget that. I remind my students that the gift of life is special and it's important to make the most of it in honor of those who have made sacrifices to make our lives better. And most importantly to give back to future generations ourselves.
It's funny how people look at things from different perspectives. On Friday, several students didn't realize what today's holiday meant. They were just thankful that they got the day off from school. And in all honesty... there was a time in my life that I probably was in the same boat as them. But at some point in time I learned the importance of Memorial Day and have a deeper appreciate of those who serve in the military.
Which brings me to my newest set showcase. Today, I bring to you the 1991 Operation Desert Shield set which was produced by Pacific twenty years ago.
I have no idea how or when I picked up this set, but I was amazed at the information and pictures Pacific used to produce this set.

The first three cards in the set are of the 41st President of the United States - President George Bush, Vice-President Dan Quayle, and General Colin Powell. The card backs feature a brief paragraph describing their roles in the Gulf War.
The set also includes photos "in action" photos, along with shots of soldiers performing drills. 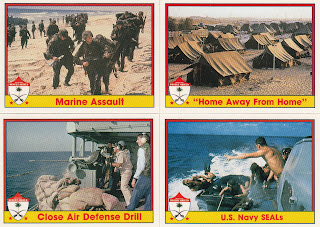 Each of these cards feature a detailed description on the back of the card. For example, on the "Home Away From Home" card, it explains how soldiers don't have many luxuries, but are able to enjoy some pleasantries such as hot meals, showers, small libraries, and post exchanges when they aren't in the field. 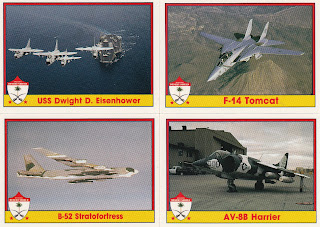 My favorite part of the set is definitely the vehicle cards. The photography alone is spectacular. But it's the information on the back of the cards that will keep you entertained. 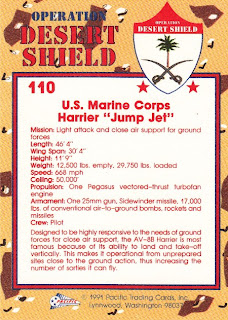 You can learn about the size, speed, armament, and purpose of over 50 different military vehicles ranging from helicopters to aircraft carriers to stealth bombers.
And if you don't already own this set, then you're in luck... because these can be found on the internet for the price of a medium pizza at Domino's. They're unlikely to be worth anything in the future, but the information you find on these cards is well worth the price.
Set: 110 Cards
Non-Sport Update Value: $15
eBay Value: $5.95 (+ $4.00 shipping)
Oh... if you're interested in reading about athletes who served in the military, then I encourage you to read my Veteran's Day post from 2010.
Well I hope everyone had a safe and enjoyable holiday weekend. Have a great week... and sayonara!
Posted by Fuji at 3:26 PM

Great Set, never seen it before - I know Topps had a Desert Storm Set - Didn't Topps use the Navy Seal Photo for Heritage this year.

Great blog post today Fuji! Great set, I have that one myself. Thanks to everyone who has served!

john bateman - yeah, i remember building the topps set. i think i sold it with the rest of my collection years ago. as for the navy seals question... DAMN... you have good eyes. It looks like topps used the exact same picture, but reversed the photo (or maybe it was pacific who flipped the negative).

jaybarkerfan - yeah, i didn't fully appreciate it until today when i was looking over it, before my post. it's definitely a keeper. and ditto on the domo arigato.