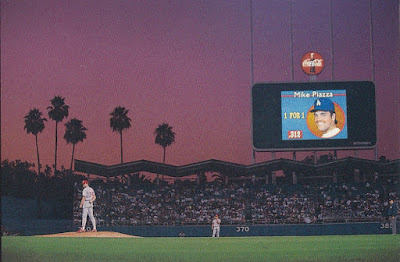 Whether or not it's a beautiful sunset, puppies in action, abandoned barns, or vintage sports cards... photography has always brought a smile to my face.  That's why when it comes to favorite cards, one of the first things I consider is the photograph. 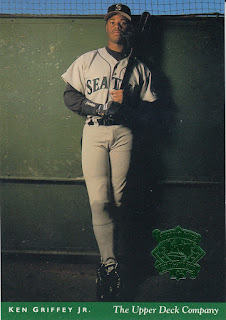 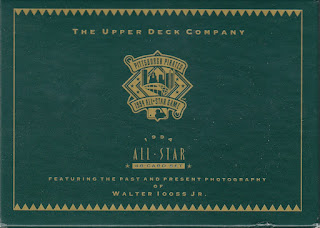 The oversized set (3.5" x 5.25") contains 48 cards and came in its very own storage box.  I have no idea where or when I purchased this set, but after taking a quick peek inside (and seeing that Griffey)... I was very pleased with the discovery. 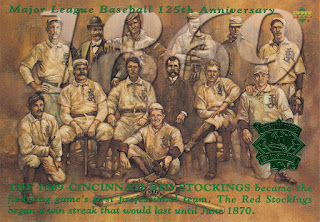 1994 Upper Deck All-Star Jumbo #43
The set is broken down into two parts.  The first 42 player cards utilize Walter Iooss Jr. photography, while the final six cards commemorate historic baseball events dating back to the 1869 Cincinnati Red Stockings.
The majority of his photographs are zoomed in portrait shots like the Ripken and Bonds: 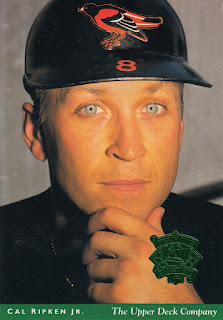 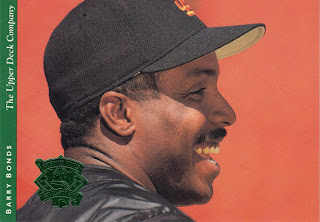 1994 Upper Deck All-Star Jumbo #35
That's not necessarily a bad thing, because Iooss has a way of making them come off as artistic.  Plus the card backs feature an additional photograph: 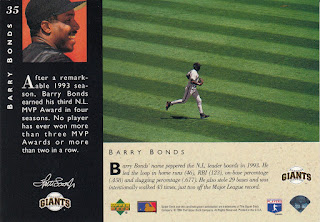 I love this "Endor" card of Bonds running to his spot out in left field.  Here's a closer look: 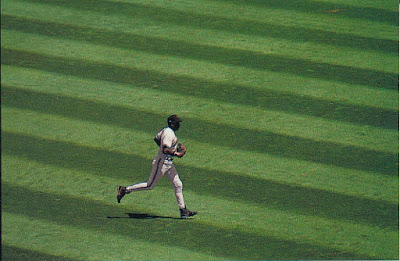 There are also posed shots, like Gwynn sitting in the dugout... 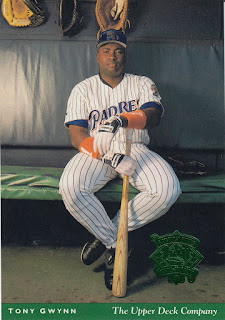 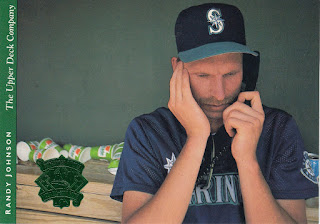 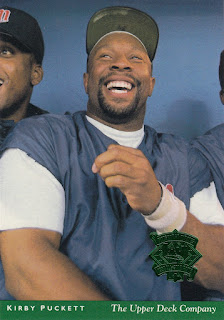 1994 Upper Deck All-Star Jumbo #14
There's even a bat rack photograph for the handful of bloggers with mini collections... 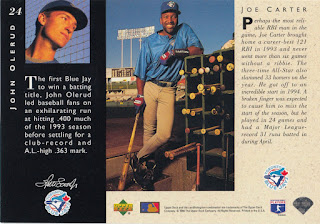 1994 Upper Deck All-Star Jumbo #24
Anyone familiar with me... knows my favorite photographs are well-cropped action shots like the David Justice... 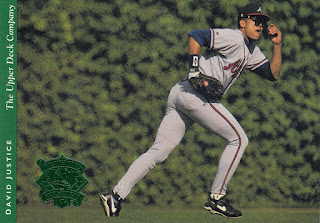 1994 Upper Deck All-Star Jumbo #33
But the coolest Iooss photo in this set is on the back of Mike Piazza's card: 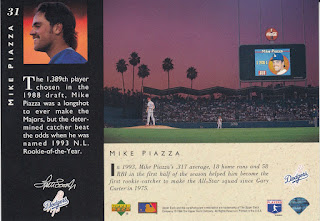 Now that's a sensational sunset card if I've ever seen one.  Looking at photography as beautiful as this makes me as giddy as Ramon hanging out with his bro... 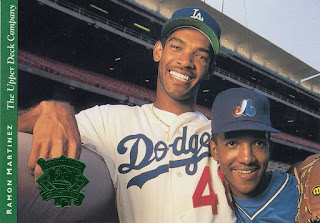 1994 Upper Deck All-Star Jumbo #32
So if you enjoy photography as much as me, you might want to consider picking up a copy of this set.  They're way more affordable than 2020 Stadium Club sets.  But just remember... they aren't your standard sized cards (for those who dislike oversized cards).
Happy World Photography Day and sayonara!
Posted by Fuji at 3:00 PM

I'm with you on the photography. I have a few sets I collected/chasing specifically because the photos are so good or distinct. I still remember when 97 Zenith came out and outside of the logo it focused solely on unique shots of the players. I have the Iooss set from 93UD; didn't know he did this one too. Looks like something else to chase!

These are really interesting. Hadn't seen them before.

Iooss was big with Upper Deck from like 1993-1998 or so. It’s too bad he doesn’t have another insert set with Topps these days. I would love to see his photography instead of about 95% of the ‘artists’ that Topps has making crap for them now, and it would be refreshing to see him get a set instead of a ‘whatever player/YouTube sensation is popular now’ branded set.
While I don’t really look at the photography first with the card (I like the write ups and stats), when the right photo is taken (like most of Iooss’s stuff and most of the stuff in Stadium Club), I will notice the photograph and it makes it easier to appreciate.

I don't think I've seen anything from this set before - usually not huge on oversized cards but these are cool. Nice change-of-pace by going with the scoreboard shot of Piazza on the back - reminds me of the '95 Score Kenny Rogers.

I have a couple of these. Nice you have the boxed set. Cool.

Nice looking cards and I love the one of Randy Johnson on the phone and what made me laugh was seeing the phone had a cord. The Bicentennial card of the Cincinatti Red Stocking is very cool. I remember the first time I saw an actual card from that time of the entire team. Nice looking cards and the sunset card is very nice as well.

I may have seen that Piazza back before or perhaps the original Walter Looss photo, but it really is stunning.

I have never seen this set before! These look great, I am going to have to track down a copy of these cards.

Paid way more than I should have for the 2020,2021 Stadium Club sets,not saying it's worth it but ,I love flipping thru both sets.

These are fun. I *think* I grabbed the Matt WIlliams from this. But seeing how I'm building the regular 1993 Iooss set I should look a more of the large ones too.

crocodile - found it sitting in a box of miscellaneous stuff a while back. tried to search my card show and flea market finds, but didn't find anything. it's sort of a mystery set.

jimetal7212 - i have several cards from that 93ud iooss set. maybe i'll build it one day

jeff b - the good news is they're cheap. at least they were the last time i checked

jeremya1um - great idea. i'd love for topps to hire him for an insert et.

nick - it's a good thing they come in their own storage box... otherwise these would be a pain to store. never seen that rogers card. thanks for pointing it out. it's awesome!

rr - i think the only corded phone in my life is the one in my classroom ;D

grant - yeah... it's my favorite photo in the set

bo - just a heads up... i picked out my favorites. a lot of the cards are portrait shots... but iooss has a way with choosing his backgrounds to make them really stand out

For me, Fleer ultra always put out great photos as well. Almost as good as stadium club