One of the things I worked on this summer was organizing my collection.  I'll use my Oakland A's collection as an example to help put things into perspective.  I had stacks of A's cards all over the place, but now they've been consolidated into a handful of locations... with the bulk being two 5,000ct. boxes.
The goal is to one day sort them out by year and brand... then build team sets.  In the meantime... there are only a handful of team sets I've created want lists for... and only one I'm actively working on. 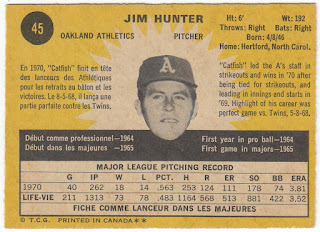 1971 O-Pee-Chee #45
That's the 1971 O-Pee-Chee team set for the Oakland A's.  I've been a fan of these cards since I first saw them on Christmas Day back in 2014.  That's when I discovered they were completely different from their 1971 Topps sister set with their floating heads and bright yellow card backs.
But it wasn't until recently that I made the decision to build the team set.  Back in June, John (over at Johnny's Trading Spot) showed off a bunch from his COMC order... which sent me on a crazy mission to build a team set of my own.
It's a work in progress, but I already have ten cards out of the way.  Nine of them are currently in my possession: 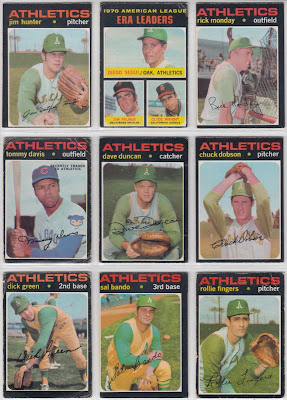 Here's a peek at their gorgeous backs: 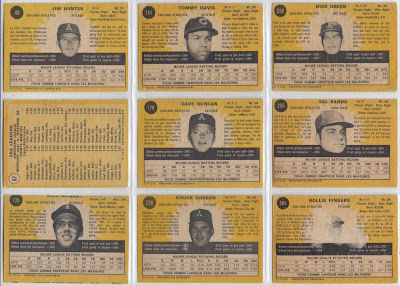 Eight of these cards were purchased from one eBay dealer the day after I commented on John's post.
The Joe Rudi will be arriving within the next week or two... with the rest of my COMC inventory.  Although this is a team set I'm actively working on, I know there's a chance it'll never be completed.  The high numbers in this set are insanely expensive.  That doesn't mesh well with the budget collector in me... which is why I consider this to be a silly set build.
And while on the topic of zany set builds, here are two more: 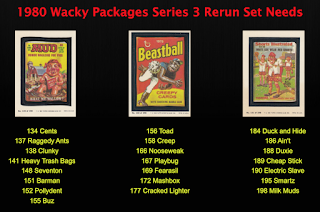 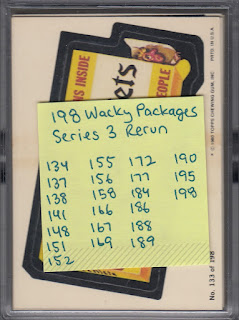 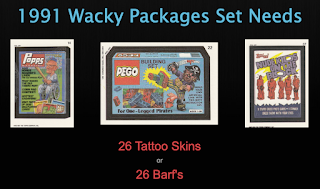 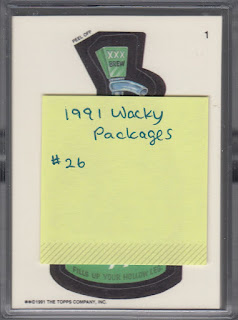 Just like the 1971 O-Pee-Chee team set, these two sets were also inspired by Johnny.  He sent me a care package several months ago that included both of these starter sets.
The 1991 set build only needs one card.  Here's a look at my favorites from this set: 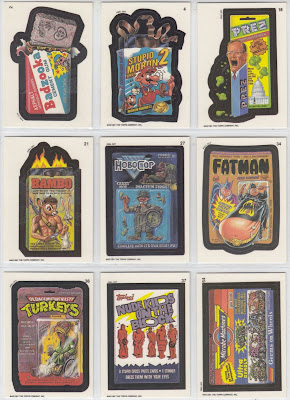 The 1991 set features a really cool Bazooka puzzle on the back which looks like this when completed: 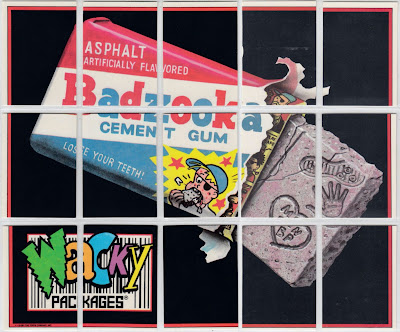 As much as I love Bazooka bubble gum, I'm an even bigger fan of the 1980 Wacky Packages puzzle: 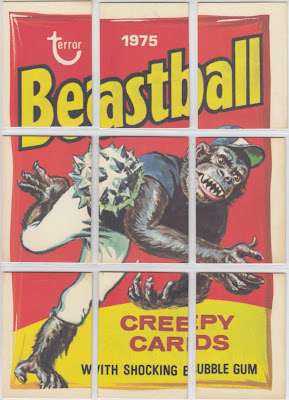 This one features my all-time favorite Wacky Packages card, which is also included in the set: 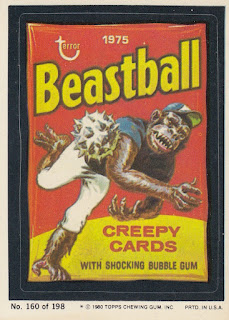 1980 Wacky Packages #160
If you're wondering why the image looks so familiar, that's because it's a parody of the 1975 Topps baseball pack wrapper.  It's so awesome!
Here are a few other favorites from the 1980 set: 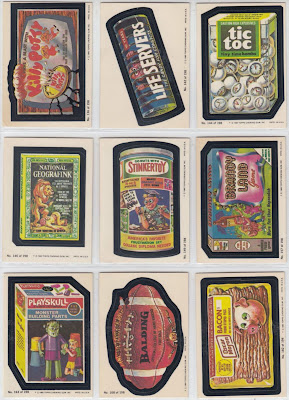 Oh wait.  Here's one more card that he sent me that was weird and interesting: 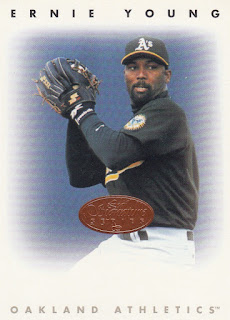 1996 Leaf Signatures Series Bronze #NNO
If you're familiar with this set, you'll notice that it's missing Ernie's signature.  Not sure if this was originally inserted into a pack or if it slipped out the back door at Donruss with an employee in the 90's.  Regardless... this is a very cool addition to my A's collection.
Thank you John for this wacky card and for these two Wacky Packages starter sets.  And most importantly... thank you for inspiring these three wacky set builds.
Happy Tuesday and sayonara!
Posted by Fuji at 3:00 PM

That BEASTBALL pack is tremendous!

Love Wacky's, although I'm only focusing on the original '70s stuff.

I have several Dodgers from the '71 OPC set but I haven't been good at focusing on what I still need.

There was an article in a 1996 Beckett magazine that talked about a few players who had issues with cards. Tim Salmon had a few that he spilled shaving cream on, Julian Tavarez signed his, but left them at a hotel and they never got delivered to Leaf, and Otis Nixon signed some of his, but the entire run of the cards (both the ones he signed and still needed to sign) were stolen from his car so he was scrapped from the project. Ernie Young’s name wasn’t mentioned in the article, so if it wasn’t an unsigned one that accidentally made it into a pack, it was probably a back door copy like you mentioned.

Glad you enjoyed that package, and the post. I still need 10 Braves (7 high #s including an SP), plus one of the others mid #s is Hank Aarron.

I love OPC cards from the 1970s and 1980s. As a Canadian back in the day we used to look down on OPC baseball cards since we though their main strength was hockey cards, while it made more sense to collect an American company's (Topps) baseball cards. So at shows my friends and I when we'd see a card in a showcase we wanted to buy we'd always have to ask the seller if it was Topps or OPC since you couldn't always tell from the front depending on the year and, being Canada, most of the time it would turn out to be an OPC. I remember my best friend bought a 1983 Ryne Sandberg rookie card thinking it was a Topps card once, only to discover that it was OPC later (the seller had deliberately put the price tag over the OPC mark on the front of the card), he never trusted a dealer again after that (though I think in the long run the OPC card was probably the better buy).

Nowadays though I think I would rather have the OPCs than the Topps cards for most of those years.....

I remember seeing the 1971 OPC card for the first time as well. The back is just so different. I think I only have one card. I'll have to track it down. The 1975 Beastball cards are pretty cool!

I love the original 1970s Wacky Packages. I really need to try to complete those sets. I have some of the checklist/puzzle complete but only a few.

I wouldn't include Davis in that A's team set. Sticks out like a sore thumb.

I have the Sal Bando currently sitting in my COMC account. I'd like to get few more of the A's from the set, but always forget to look for them.

I loved those wacky Packages and one of my favorites was the battery Never Ready instead of Ever Ready. Also like the Badzooka one, classic stuff. Thanks for the post.

OPC! So underappreciated for sure.

jeremya1um - i'd love to add one of those "lost" nixon signatures to my collection. thanks for the heads up.

johnnys trading spot - thanks for inspiring the team set build... and for hooking me up with the wacky package starter set.

sean - about ten years ago, i started chasing opc cards from the 80's. before then, they were much less desired (by me) compared to topps. it's nice to see more collectors starting to show appreciation for the canadian counterparts.