The end of my summer break has arrived.  Officially, I return tomorrow for training... and greet the kids on Wednesday.  Unofficially... I went into the classroom every day last week and worked over thirty hours.
I was really hoping to sit back, recharge, and enjoy a "lazy summer"... but it wasn't meant to be.  I pretty much had something to do on a daily basis from the very beginning to the end.  The first half involved road trips and family time.  The second half involved card related stuff (organizing and card show preparation), comic books (I inherited a collection a few weeks ago), and getting ready for the new school year.  If that wasn't enough... I had dentist appointments, lunch and dinner dates, and day trips sprinkled in here and there.  Plus... I even wrote a few future blog posts that have been scheduled over the next few weeks.
That's probably how things are going to be around here for the time being.  The start of the school year is usually the busiest time of the year for me the last thing I want is for blogging to feel like a second job.  Sure I will occasionally write a spur of the moment post (like this one), but be prepared... most will be written in advance.
Okay... let's check out some cards I recently added to some of my set builds.  The first four were part of my most recent COMC shipment.  Let's start with this vintage Joe Rudi: 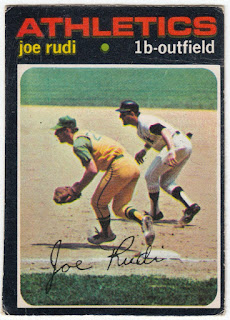 1971 O-Pee-Chee #407
Is this photo cool or what?  It's like synchronized swimming on the infield by Rudi and his New York Yankee partner.
But the real treat is on the back: 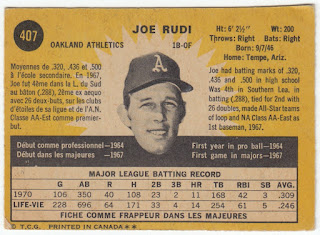 Yup.  Another floating head for my 1971 O-Pee-Chee A's team set.  This card was either poorly cut from the factory... or trimmed.  If you look closely... there's sort of a shark fin rising from the upper righthand corner of this card.  No biggie.  It only set me back a buck and some change.
The next three cards were pricier: 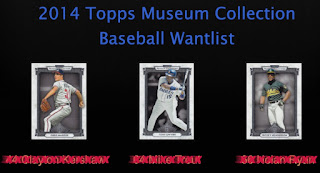 More importantly... I can now remove this bulky set from my "set build" cubby and free up some space for other sets.
And while we're on the subject of set building, Greg over at The Collective Mind recently sent me six cards for four different set builds.  Let's check them out in chronological order... 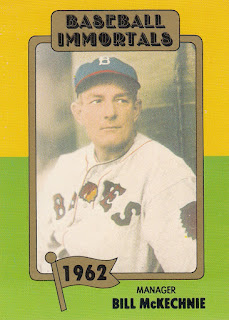 1980-88 TCMA Baseball Immortals #88
Love this set and was very happy to slip this McKechnie into it's 9-pocket page. 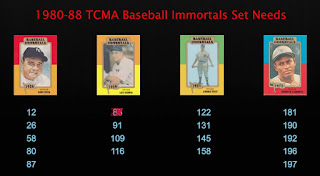 One down.  Seventeen more cards to go.
Next up is a starter set I discovered in a box a few months ago.  Not sure where or when I acquired it, but this Keith Hernandez gets me one step closer to completing it: 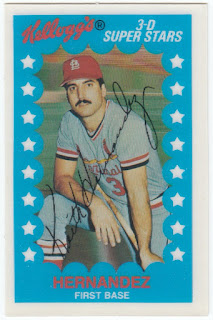 1982 Kellogg's #23
I still have a ways to go.  This set was distributed as a complete set through a mail-in promotion and weren't actually inserted into cereal boxes. 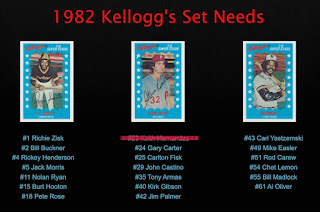 So if you see singles from this set, you know it was originally from a complete set.
He assisted me with one more 80's set build... 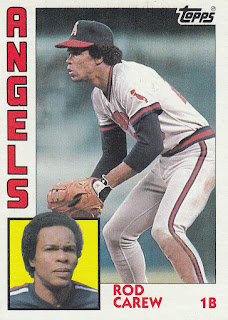 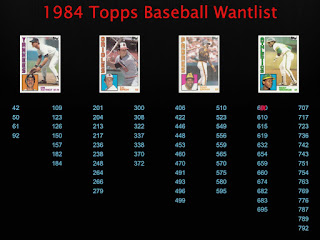 Much like the 1986 Donruss set build, I'm in it for the long haul.  I could easily finish it off by going onto Sportlots, but I refuse to pay 18¢ each for commons.
The same can be said for my 2020 Topps A&G set build: 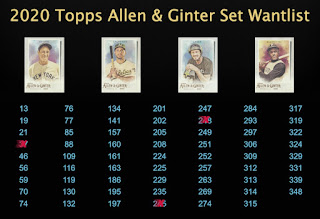 I'm slowly chipping away at this set.
Thank you Greg for this set building 6-pack!
Okay... I've got the whole afternoon in front of me.  I'm going to head downstairs, heat up some tamales, turn on the tv, take a nap, and relax the rest of the afternoon.  I might not have gotten my "lazy summer", but I still have time to enjoy a "lazy Sunday".
Happy Sunday and sayonara!
Posted by Fuji at 12:00 PM

Happy back to school! I know it means a lot of work for you but I'm glad you're still out there teaching. Good luck with your set building, too. I'll continue to shill for TCDB trading which is great for getting cards that don't merit paying $0.18 for on Sportlots (if you decide to add cards for trade and your wants there).

I still am freaked out by how early school starts in the south and out west.

Good luck with your set builds and lazy Sunday!

My homework started Friday, and my first class is this Thursday. Oh well.

Thanks for the update, and keep on teaching those kiddos, we appreciate you!

My mom suggested I ping you about meeting at a San Jos Giants game last week but I told her I knew better than to bug a teacher the week before school starts. Nothing like going through a COMC shipment to relax though. Hopefully school continues getting more normal this year.

That Joe Rudi is great. I still need both versions of that card :(

Wishing you a great school year.

I love those 1971 Topps cards as I have always liked the colored borders and the black ones did tend to chip easily but I did not care as it showed the rustic look, which I like. Yes, here in the northeast the feel in the air is fall and school will be starting very soon, and it kicks off the hockey season, YaaYY!!

Good luck in the new school year! My kids don't start until 9/8, but it definitely feels like the sun is setting on summer.

Hope the school year goes well for you! Best of luck buddy!!

Glad to see those made it! I haven't been reading blogs lately, it's been an up and down summer. I'll post about it in a bit. Have a nice rest before the school year cranks up...

dennis - outside of largent, i don't see myself doing anything on tcdb anytime soon. i hope to one day though

night owl - my friend's kids in oregon don't start for another two weeks. when i was a kid, we started the first week of september. but it's been mid august for my district as long as i've been in it. doubt i'll ever see a september start again.

gtt - have a great school year! hope you enjoyed your first week back.

john sharp - thanks! first week was pretty solid. have a couple of periods with high numbers, but the kids were pretty good. the second and third weeks are when their true colors begin to shine

nick vossbrink - lol. it would have depended on the day. i went into my room every day that week... but i spent more hours on certain days. i miss eating those churros and grabbing bbq

jon - didn't appreciate that rudi until i started this team set build. i actually kind of want to add a graded topps version to my classic cards collection at some point

johnnys trading spot - thank. i hope it's great too

rr - i miss the days when i was excited about hockey season. hopefully the sharks will revive their winning ways and give fans something to be excited about

the lost collector - wow. i'm super jealous. sounds like san jose schools back in the 80's

jafronius - thank you. i'm hoping for a productive and low stress year

sumomenkoman - thanks bro. hope things at work are mellowing out now that summer is drawing to a close

gca - this is the first time i've look at a blog in probably a week. not sure i'll be as active on blogger the next month or so, but i'll try to keep an eye out for that post. and thanks again for the set help