Three weekends.  Two flea markets.  One card show.
It's going to be a "good" kind of busy.
Last weekend was the monthly Branham High School Flea Market.  The highlight was running into a buddy I hadn't seen in quite some time.  He's a vendor who always has unique stuff.  I picked up a pretty cool item for my San Diego Padres collection, but before I show that off... let's review two purchases I made earlier.
Purchase #1:  1990 Donruss Set $7 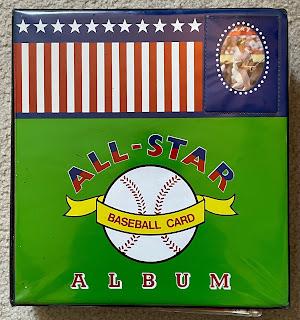 I have little interest in adding another 1990 Donruss set to my collection.  However the vendor pointed something interesting about this particular binder.  At the very back, there was also a complete set of 1990 Donruss Super DK's: 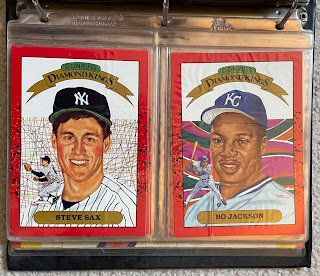 Collectors could send $10, three wrappers, plus $2 for postage and receive an oversized (5x7) set of Diamond Kings. 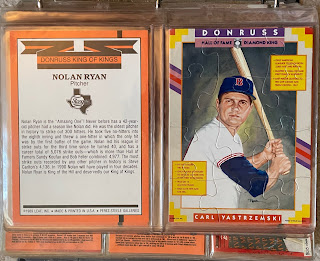 The set includes twenty-six Diamond Kings, a checklist, a twelve piece puzzle of Carl Yastrzemski, and this Nolan Ryan:

1990 Donruss Super DK's #NNO
I know it looks like the same King of Kings card from the base set, but this card isn't numbered.  The regular sized version is card #665.
Sadly... the 1990 Diamond King checklist is a bit underwhelming in regards to big names, but it does include this really cool Ken Griffey Jr.:

1990 Donruss Super DK's #4
These two cards alone were well worth the seven dollars I pulled out of my pocket.  The Super DK set will be added to the collection.  I'm hoping to recoup some or all of the money by selling the binder and regular set at the next show I set up at.
Purchase #2:  More Sets and a Rookie Card $3 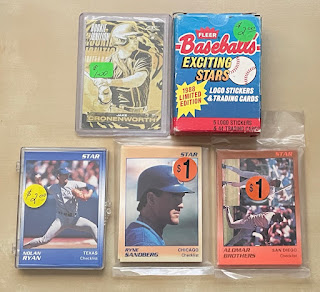 Nothing too special here.  The same vendor who sold me the Donruss set also had a box of miscellaneous cards.  I pulled out three Star Company sets, a beat up 1988 Fleer Exciting Stars boxed set, and a Jake Cronenworth rookie insert and offered him $3 (pretty much to make it an even ten bucks).
I like adding oddball issues like those Star sets... and I don't own many Cronenworth cards.  As for the Fleer boxed set, it's missing three cards (McGwire, Mattingly, and Clark)... so I'll be breaking it up and adding singles to certain player collections if I don't already have a copy.
Purchase #3:  1971 Dell Today's Team Padres Stamp Book $5 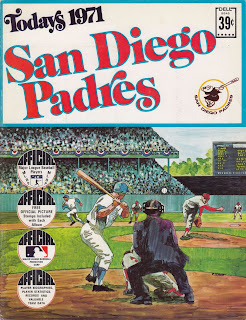 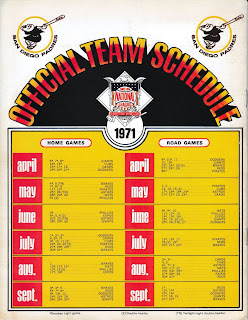 My buddy picked up a bunch of these books at another local flea market and was flipping them.  He said he's made a tidy profit off of them.  I was hoping he'd sell me the Oakland A's book too, but he decided to keep that for his own collection.
Anyways... if you've never seen one of these books before, they come with a bunch of player stamps: 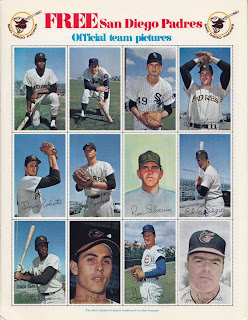 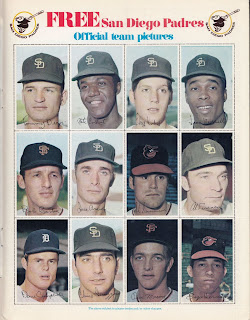 I've added a few individual stamps to my collection over the years, but I'll be keeping this book intact.
Purchase #4:  Mother's Cookies Albums $20
My big purchase of the day were these three card albums featuring complete sets of San Francisco Giants Mother's Cookies SGA cards:

For over a decade, Mother's Cookies gave away envelopes filled with 28 baseball cards to San Francisco Giants and Oakland A's fans on trading card day.  The Mariners, Astros, Dodgers, Angels, and Padres also participated in this promotion.
Each fan would get twenty or twenty-one different cards and seven or eight copies of one specific player.  The goal was to encourage fans to trade their duplicates for the cards they needed.  Pretty ingenious, right?
There was also a special card you could mail in with some money for these four pocket albums.  This vendor had a bunch of Giants sets from the 80's, but I didn't want to pay his $10/set asking price.  I ended up pulling the 1983, 1985, and 1986 sets and asking if he'd take $20.  He did.
Here's a peek at what each set looks like...

1985 Mother's Cookies #10
Here's a cool action shot of Vida Blue.  He headlines a solid checklist.  The only names I didn't recognize as Giants from my youth were Doug Gwosdz, David Green, Gary Rajsich, and Scot Thompson.

1986 Mother's Cookies #7
This is my favorite card out of all three sets.  Why?  This card brings back one of my favorite baseball card memories.  I was at the game when these envelopes were passed out.  Sadly, I didn't keep it... but I did hold onto the Will Clark.
Purchase #5:  1959 Idaho Basketball Tournament Pamphlet $1 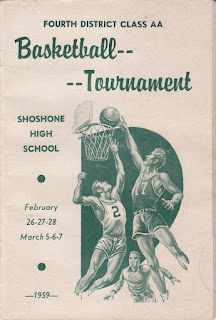 There's a regular vendor who has a variety of pop culture and random periodicals that he tosses onto his dollar tarp.  Last month I picked up that Digable Planets photo.  This month, I grabbed this pamphlet.
Inside one of the teams signed their page: 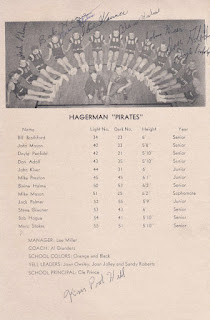 It caught my attention and figured it was something old and unique for a buck.  Plus I spent over an hour looking up each of these guys to see if any of them went on to play in the NBA.  To make a long story, very short... they didn't.  Sadly I did come across a few of their obituaries though.
That wraps up another trip to the flea market.  This Saturday there's a card show at a local mall.  Ryan (SumoMenkoMan) is flying in for the day and we're going to hit it up, check out some card shops, and hang out.  Then the following Saturday is the De Anza Flea Market.  Like I said at the start of the post... it's a "good" busy.
Happy Wednesday and sayonara!
Posted by Fuji at 3:00 PM

Nice haul! I'm still working on tracking down a number of the Star Larkin cards. Tricky things to find these days!

I would have gladly paid the $7.00, pulled they Super DK and left the binder. Also nice to add some Mother's Cookies.

Cool stuff. My great grandma lived in Hagerman for a while, wonder if she knew any of those players.

That’s a nice score with the jumbo Diamond Kings. You should display the jumbos with the complete set, the Rookies set, the Baseball’s Best set, and the Learning Series set in the binder.

Super cool stuff. I recently got a bunch of Star player sets for a dollar each at a flea market.

Those Super DKs are your second 1990 Donruss related pick ups in as many weeks. Very nice, anything about that set brings me back to the good old days (even though objectively its.....well, its 1990 Donruss and its red).

Nice haul. Hopefully we can find some good stuff on Saturday as well.

Congrats on picking up some neat stuff.

Always a good day when you get Mothers Cookies cards.

Did the MC albums come with pages, or were people supposed to supply there own?

So many great cards in this post with the Donruss and Mothers Cookies cards. I know that the 1990 Donruss set frequently makes those horrible set lists, but I have a soft spot for it for some reason. Love the black borders on the Giants Mothers Cookie cards. Those are sharp.

Fantastic haul. Love the stamp book. Love it all. Always a great time when you can busy doing stuff like that.

nachos grande - now that you mention it, i don't think i even own any gwynn or henderson star cards. but i have picked up a few of these bagged sets over the years.

the diamond king - would you like that pamphlet? i don't really have any use for it. if so, i'll send it your way.

jeremya1um - if i had more space, i'd consider doing it. i actually was at a show yesterday and a guy offered me both of those baseball's best sets for $10. i didn't grab them, because i already had spent close to $70 from him.

wax pack wonders - nice. hard to pass them up for a buck.

sean - never been a fan of 1990 donruss, but gotta admit that i like it more today than ever before

sumomenkoman - i was pretty stoked about a few of my card show purchases. had fun hanging out buddy

bbcardz - thanks. hope next weekend i'll find some more bargains

the lost collector - thanks. hoping to have more to share when i go to next saturday's flea market.

nick vossbrink - i agree. was pretty stoked to add them to the collection. found a few at the card show yesterday, but they were 90's sets and the guy wanted a little too much for them

jon - yeah. they're those premade albums that have 10 4-card pages. the sad thing is, they use those 80's style pages, so you have to be careful pulling cards out from them. if they were left in the sun too long, the glossy mother's cookies cards will sometimes stick to the page when you try and pull it out (resulting in damaged cards)

the snorting bull - 1990 donruss will never make my favorite design list, but i will admit... it's growing on me.

bamlinden - thanks. i was stoked about adding the stamp book to the padres collection. have a great summer too!