The summer cleaning project has begun and my scanner is buried under and behind stacks of cards and Lego sets.  I'm in the middle of dusting and organizing my office.  How does that impact the blog?  Well... since I won't be able to scan cards in the near future... any posts published this week will feature saved scans.
That kind of sucks, because it would have been fun to pull some cards out of the 70's and 80's binders for today's post... which is my submission to our blogosphere's current Blog Bat Around.  Yesterday was National Sunglasses Day and Collecting Cutch inspired the BBA by asking his readers to show off our "sunglasses cards".  His post included a ton of Andrew McCutchen cards featuring him with his shades.
John Sharp and Elliptical Man joined in too.
Here are some of my favorite athletes wearing shades: 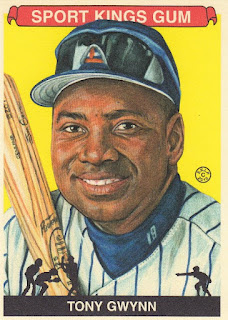 2010 Sport Kings Series D #180
I know Mr. Padre isn't technically wearing his sunglasses, but I'm just following Collecting Cutch's lead.  Plus Elliptical Man used the Gwynn card I originally wanted to use.
Even though many of the cards in today's post have been featured before, I did try to include a variety of trading cards.  Here's my obligatory rookie card: 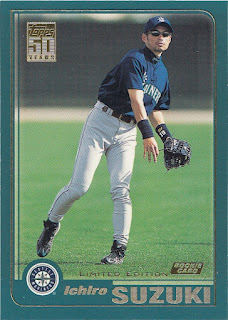 2001 Topps Limited Edition #726
Going back to my childhood, one of the most iconic baseball players to wear sunglasses was Teke: 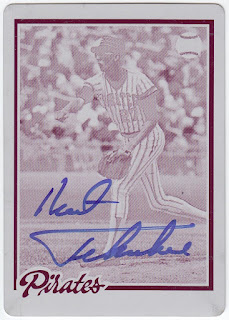 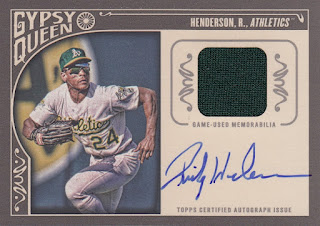 2015 Gypsy Queen Autographed Relics #AR-RH
Back in the 90's, it seemed like all of the "cool" kids wore Oakleys.  Including the Black Mamba: 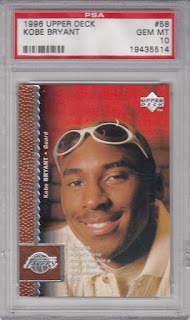 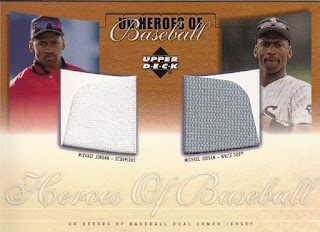 2001 UD Prospect Premieres Heroes of Baseball Dual Jersey #J-JJ
What about you?
Do you wear sunglasses?  Oakleys?
Me?  I was more into Ray-Ban and Revo back in the 90's.  These days... I don't even wear sunglasses, but I do own some trading cards with guys wearing them.  Now if I could just add one of those 1970 Topps Lowell Palmer cards to my collection.
Happy belated National Sunglasses Day and sayonara!
Posted by Fuji at 3:00 PM

I used to never wear them, but in the last 10 years I always wear them, and I can say they do make a big difference when driving in the sun.
I was kind of surprised that Jose Rijo didn’t make an appearance on your post. His ‘94 Collectors Choice card has him wearing an outrageous pair.

All clip on sunglasses now.

Very cool Rickey Henderson card.
Thanks for joining the BBA.

I wear them driving when necessary. I used to wear them all of the time either Oakleys or Maui Jim's. Now days I wear Calloways. As for the cards above....my fave is the Ichiro rookie (I don't have it).

I rarely wear sunglasses. Thanks for sharing these cards. That Tekulve is great!

That Rijo card came to mind for me, too!

Dollar store sunglasses for me. I tend to lose or break sunglasses, so that's my solution.

I wear regular glasses and I always misplace clip-ons so I kind of gave up on them and now just wear baseball caps to shield my eyes from the sun. I do like cards with players in sunglasses though, Rickey Henderson seems to always look cool in them on his cards.

I don't wear sunglasses. Been wearing the other kind since 5th grade.

You certainly have an impressive collection.

I wear sunglasses but don't know the brand. Got them at the supermarket.

I have a pair of "clip-ons" that attach with little magnets to my regular glasses. I keep them in the car so I don't leave them places (or even in the house).

A Bat Around and I didn't hear about it! Was on vacation visiting all the local shops and shows (and a couple not so local). Will be posting about them once I feel better. Caught a cold from one of the shops...

I wear Raybans, although I did just get free pair of Oakleys I've been rocking.

I tend to lose sunglasses or forget them when I go out, so I have some cheap pairs in my car and work bag as backups.

I forgot to mention, that Jordan dual-relic is awesome. I didn't realize he has baseball relic cards.

I always wear shades when driving. I leave them in my car because in the past my wife has lost or broken multiple pairs of my best sunglasses.

jeremya1um - i doubt i even own that rijo. if i did, it's part of a complete set buried in a box.

john sharp - thanks for helping get this bba off the ground!

johnnys trading spot - the last pair of nice sunglasses i ever bought was maui jim's. that was over 10 years ago. i actually don't have the regular ichiro rookie either. the one in this post is the limited edition, but i'm hoping to add the regular topps one day

collecting cutch - thanks for kicking off this bba!

jeff b - that's a good solution. if i ever buy another pair of sunglasses, i'll consider that place or the flea market

sean - rickey sure does have quite a few cards with him wearing shades. i used to wear baseball caps all the time. that's another thing i don't really do too often anymore

elliptical man - thanks. it's called being a hoarder.

anonymous - nice. if i ever buy another pair, it's likely to come from the flea market

the lost collector - that's the only jordan relic card i own. the reason i could afford it, was bc it's a baseball card. his basketball relics are very pricey

runfore!kelloggs - on accident or purpose? 😝