Forty years ago... I ripped into my first packs of baseball cards.  Don't even bother asking me the first card I pulled from my first pack, because I have no idea.  I couldn't even tell you the brand, but if I had to guess... I'd go with Topps or Donruss.
I remember trading both of those brands on my porch with my neighbors back in the day.  One of the hottest cards on the block was the 1981 Donruss Al Hrabosky which I've written about before.  Back then... I think the only cards more popular on the porch were cards of Rickey Henderson and Fernando Valenzuela.
Over the years, I've discovered tons of other awesome 1981 baseball cards.  One of them is this Mike Schmidt I picked up for $4.29 last year... right before the lockdown. 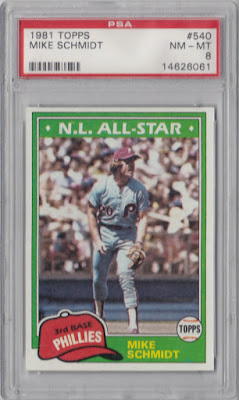 1981 Topps #540
I don't think any of my friends owned this card.  If they did... it wasn't part of their trade stack... because even the 9 year old version of me would have loved this card.  Just look at Schmidt glaring or even yelling at someone. 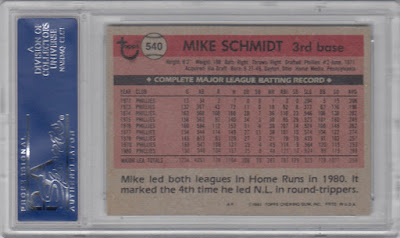 Plus he was coming off of his first MVP season when collectors were first pulling this card.  I'm kind of glad I didn't own this card back then, because I might have been lured into being a Phillies fan.
Anyways... this card is dedicated to Elliptical Man who recently removed me from his will because I chose Ichiro Suzuki as my favorite player with the last name starting in the letter "S", instead of Schmitty.
Since this is sort of a Throwback Thursday post... I figured I'd share two more cards related to 1981: 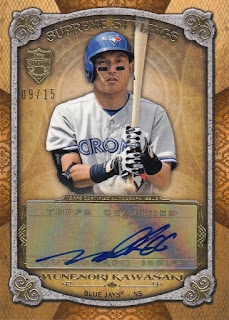 2013 Topps Supreme Stylings Orange Autograph #SS-MK
Munenori Kawasaki was born on June 3, 1981... exactly 40 years ago.  Happy birthday Kawa!
If you're not familiar with this guy, do yourself a favor and click here. 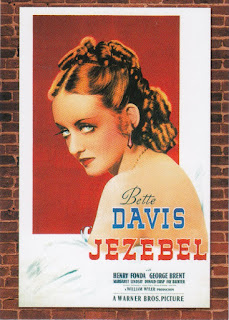 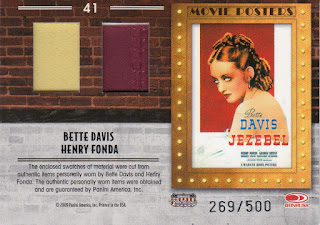 Never heard it?  Click here.  Great song and fond memories.  What about you...
Any fond memories from 1981?
Happy Thursday and sayonara!
Posted by Fuji at 7:00 PM