Baseball has always been fun and entertaining, but it's even more fun and entertaining when your teams are playing well.
As of this morning, the San Diego Padres had the fifth best record in the National League and although they're currently looking up at the San Francisco Giants and Los Angeles Dodgers in the NL West standings.  Both of these teams are on fire... and the Padres are struggling, but on the bright side there is still a lot of baseball left to be played.
That's why I'm closely following all three teams and it makes me cringe seeing the Giants with the best record in baseball.  The Dodgers are right behind them.  The crazy thing is they've been dealing with so many injuries.  They're going to be straight up scary when they have everyone healthy.
In the meantime guys like Steven Souza Jr. are getting the opportunity to shine.  On Wednesday the Dodgers called him up from AAA Oklahoma City and last night he launched a home run that gave his team the lead over his former team.
When I first saw his name, I recognized it... but couldn't remember where or how... so I searched my computer and found these two cards: 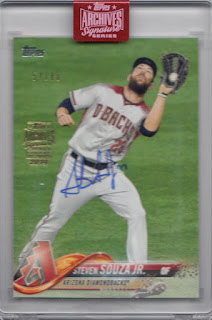 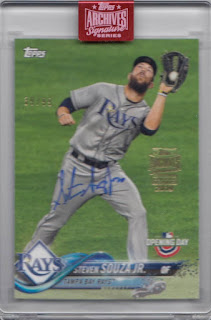 It's pretty cool what Topps can do with some photo editing software.  The past year and a half have been a little insane which is why these scans were buried in a folder, but thanks to Souza's heroics in last night's game... I can finally clear out these scans.
And if Souza doesn't present enough star power for ya... here are two more scans representing the two best teams in the National League that I remove from my scan folder: 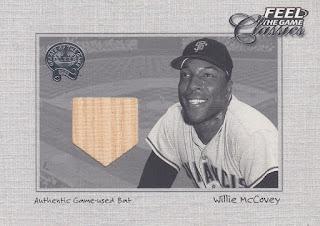 2001 Fleer Greats of the Game Feel the Game Classics #NNO 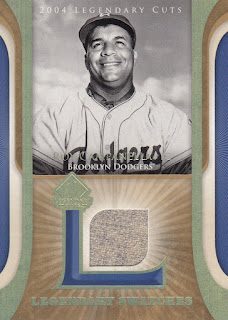 2004 SP Legendary Cuts Legendary Swatches #LSW-RC
Congratulations Giants and Dodgers fans.  Both of your teams are as hot as the temperatures here in San Jose.  As for the Padres... they've cooled off a lot the past few weeks and according to the internet... it's about 16 degrees cooler down there.  What the heck?  I thought it was always warmer in Southern California.
What's the weather like in your neck of the woods?
Okay... time to take a cold shower.  Happy Saturday and sayonara!
Posted by Fuji at 6:00 PM