Shopping has been a source of entertainment for me for as long as I can remember... even if it involved window shopping.  These days... a high percentage takes place online.  But today we go old school.  Today we're heading into some retail chains from my youth.  To be more specific... 1988.
Back in the day, Topps started partnering with retail stores to produce 33 card box sets that collectors could only purchase exclusively at that store.  And unlike the present day where you can find a Target location in just about every major city in this country, most of these stores were regional.  Remember... this was before people bought, sold, or traded cards on the internet... which explains why some of these sets eluded my collection for years... even decades.
Are you ready to hit up some 80's stores with some really cool exclusive super glossy sets?
Let's go...
Store #1:  Revco 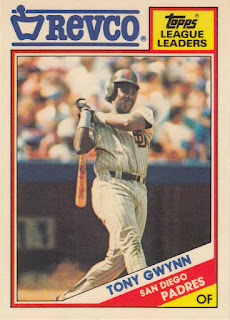 1988 Topps Revco League Leaders #1
Founded: 1956
Closed Up Shop:  1997
According to Wikipedia, Revco was a discount drug store located in the Ohio Valley, Mid-Atlantic states, and in the Southeastern part of the United States.  I've personally never shopped there, but was familiar with the name prior to owning this card. 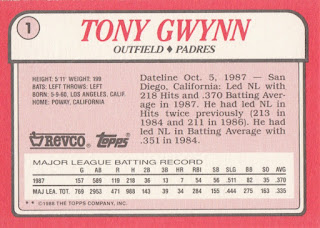 Topps teamed up with Revco to honor baseball's league leaders.  They did a good job with this card by referencing both of Gwynn's batting titles won up to this point in his career.  Based on my research (TCDB), this was the only time the two companies joined forces.
Store #2:  Kay Bee Toys 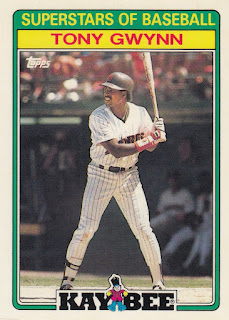 1988 Topps Kay Bee Superstars of Baseball #13
Founded: 1946
Closed Up Shop:  2009
Kay Bee Toys was a mall-based toy store.  I don't remember seeing them in 1988, but in the 90's, I'd hit up the different KB's in my area searching for Kenner Starting Lineups.  Later in the decade, I'd drive down to their Gilroy Outlet location, because they had a decent selection of discounted trading card boxes. 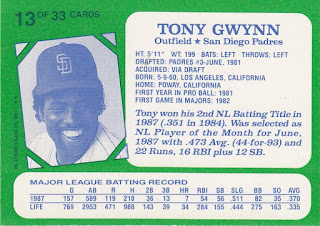 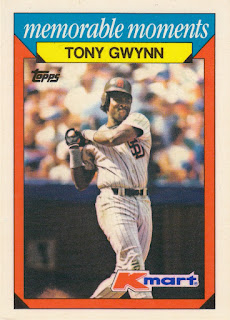 1988 Topps Kmart Memorable Moments #12
Founded as Kresge's: 1899
Renamed Kmart: 1977
Closed Up Shop:  NA (less than 50 stores in the US)
Kmart was the 70's and 80's version of Target and Walmart.  When I was a kid, I was embarrassed that my parents shopped there.  It's one of those memories where I shake my head... because I'm sure my parents were embarrassed by me acting like such a snob. 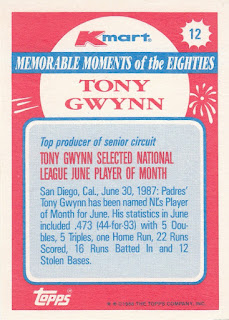 The 1982 MVP Anniversary set is the first thing I think of when I hear the words Topps and Kmart.  But they also partnered up to produce four 33 card boxed sets later in the decade.  The 1988 set featured Memorable Moments of the Eighties.
Although Gwynn winning the 1987 NL Player of the Month for June is pretty cool... I wouldn't classify it as a memorable moment of the 80's.  I probably would have went with him winning a batting title and helping his team reach the World Series in his first full season in the league.
Store #4:  Rite-Aid 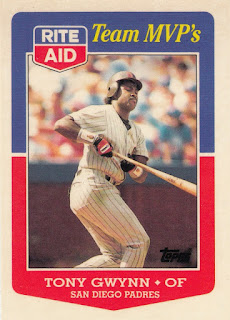 1988 Topps Rite Aid Team MVP's #11
Founded: 1962
Closed Up Shop:  NA (approximately 2,450 stores in the US)
Rite Aid is one of those drug stores similar to Long's or Thrifty's.  Right around the time this set was released, I was scooping ice cream at Thrifty's, which was later acquired by Rite Aid.  There's a store less than a mile away from my doorstep.  I haven't been there in years, but whenever I walk into that place, it reminds me of those days working at Thrifty's. 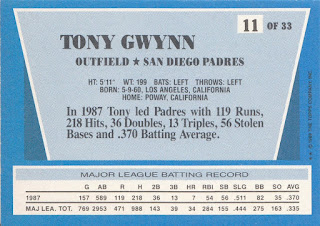 This set appears to have been a one-and-done partnership between Topps and Rite Aid.  Its theme is Team MVP's and Gwynn was a wise pick by these two corporations to represent the Padres in this set.  As expected... every MLB team had at least one person represented in this set.  However since there are 33 cards in this set, there are several teams with multiple players represented.  Remember... back in 1988 there were only 26 MLB teams.
If you're wondering who had the most players represented in this set, that honor went to the 1987 World Series Champions.  They have four players on the checklist: Kirby Puckett, Jeff Reardon, Gary Gaetti, and Frank Viola.
Store #5:  Woolworth 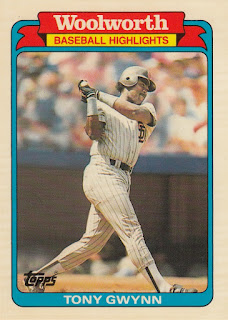 1988 Topps Woolworth Baseball Highlights #12
Founded: 1879
Closed Up Shop:  1997
Wikipedia names Woolworth's as one of the original pioneers of the five-and-dime store.  When I hear the name, my first thought are the sit-ins that took place back in the early 60's.  I can't remember shopping there myself, but I'm sure I stepped into one of their stores at one point or another.
The first time Topps and Woolworth partnered up was back in 1985 when they featured some of MLB's All-Time Record Holders.  From 1987 to 1991, they produced a set featuring Baseball's Highlights.  The 1988, 1989, 1990, and 1991 sets use almost the same design.  I was hoping to use Gwynn as an example to show you this, but he only made it into the 1988 set.
But here's at look at Andre Dawson's four cards from each of these four sets:

COMC Images
Getting back to Gwynn... 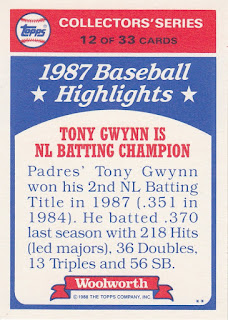 His card highlights him winning his second batting title in 1987.  That year he also won his second Gold Glove Award and his third Silver Slugger Award.
Well that wraps up our tour of stores that Topps teamed up with back in 1988 to produce some cool glossy 33 card sets.  A special shout-out goes to Peter over at Baseball Every Night who inspired this post by sending me the Revco Gwynn at the start of this post.
Thank you Peter!
Here is today's question of the day...
Out of the five stores mentioned in today's post... how many have you shopped at?
Do you have any fond memories involving any of these stores?
As usual... I look forward to reading and responding to your comments.  Happy Tuesday and sayonara!
Posted by Fuji at 3:00 PM