A Little Ray of Sunshine

This week wraps up my 23rd year in the classroom and I have a lot of mixed emotions.  A large part of me is breathing a huge sigh of relief.  The past sixteen months have been pretty stressful for many of us.  There were moments when I questioned whether or not I still enjoyed my profession.  Then in April... I returned to my classroom and things instantly turned around.  It's not back to normal... but it's nice being able to converse with my students in person... even if only three show up on a regular basis.
That's why I'm kind of bummed the school year is over.  It's hard to believe I just type out that statement, since usually I'm celebrating the arrival of summer break.  But I'm just caught my second wind and feel like I can keep teaching another few months.
Oh well... I'm sure by next week I'll deeply appreciate the rest and relaxation.
Plus... I know my students need time to recharge their batteries.  Some of them have really struggled over since the lockdown.  That's why I was very honored to receive this award recently: 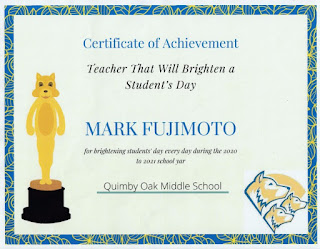 It's nice to receive praise from colleagues, administration, and parents... but it's even more special when it comes from the student body.
There have been many occasions where I sat behind the computer screen and wondered if I was reaching any of them.  When I tell a joke or sing a song to my students, I usually get chuckles and immediate feedback from the classroom.
However on Zoom... they're muted and the screens are so tiny it's hard to tell if they're smiling or not.  I realize that this award doesn't represent the entire student population.  Based on the number of teachers at my school and the number of students I actually had this past year, I might have only won this award with 5% of the votes.
Regardless... it shows that I brought a little ray of sunshine to some of my students and that brings a lot of joy to my heart.
Okay... enough rambling about work.  That's not what this blog is about.  Let's move on to trading cards.
Today I figured I'd show off a few cards that brightened my day a while back: 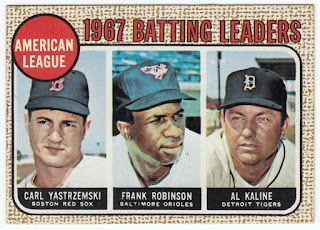 1968 Topps #2
Right about the time I was getting ready to return to the classroom, I received a care package from Reader James who wanted to thank me for entertaining him with my blog.
Well James... thank you for this care package which definitely hit several of my PC's.  First off is this 1968 Topps AL Batting Leaders card that features three first ballot hall of famers.  I'm in the process of tracking down every Topps League Leaders card that exclusively headlines hall of famers.

1951 Bowman #8
My interest in early 50's Bowman is fairly new.  If I were to guess... I'd say it was probably inspired by this flea market find back in 2014.  Since then I've really fallen for these gorgeous pieces of cardboard... especially the 1951's.
Up until receiving this card, I wasn't familiar with Mr. Lehner.  But if you were a kid back in 1951 and you pulled this card from a pack, you probably wouldn't have been too disappointed.  Lehner was coming off of the best season of his career.
Sadly he passed away at only 47 years of age in 1967.  Thankfully the Society for Baseball Research has taken the time to document his career on their website if you're interested in reading more about him. 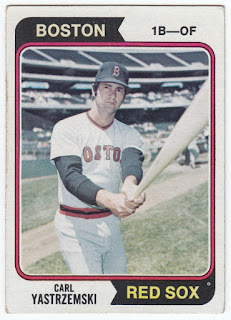 1974 Topps #280
Kudos to James if he hand picked this card for me, because it features a shot of the Oakland Coliseum in the background.  I'm terrible with stadium recognition... but there are a handful I can recognize easily and this is one of them.
I will always cherish the trips to the Coliseum and Candlestick Park in my youth.  And for years, I've debated on starting a binder or Frankenset with cards featuring these two ballparks.  I'm not quite ready to commit to this project, but if I do... this Yaz will be a part of it. 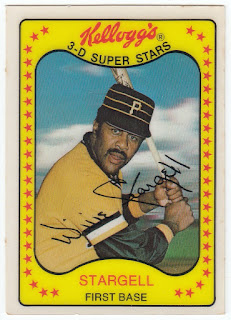 1981 Kellogg's #11
Anyone who knows me as a collector... understands why this card brightens my day.  Doesn't lenticular Kellogg's cards from the 70's and 80's brighten everybody's day?  Even if it doesn't... this card is the epitome of a little ray of sunshine. 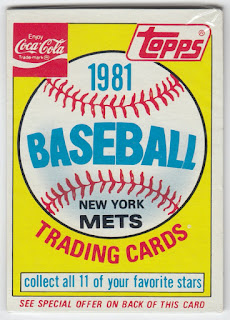 1981 Topps Coke New York Mets Pack
The last thing I want to share from the care package is a forty year old unopened pack.  I started collecting baseball cards back in 1981, but never had access to these Coca-Cola team cards that I'm assuming were distributed with 12 packs of Coke.
I'm also assuming these were regional issues since they were only eleven MLB teams chosen to be a part of this promotion... and none of them were located on the west coast of the United States. 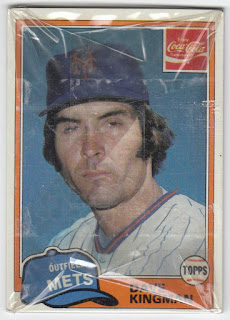 1981 Topps Coke New York Mets #3
If you're wondering if I've ripped open this pack, I haven't.  As much as I enjoy collecting regional food issues, I figured this collectible would be a better fit for my unopened pack collection.
Kong doesn't seem amused with my decision to keep him locked up, but it's easier to find a single copy of this card than it is to replace this pack.
By the way... a quick look on COMC revealed that Kingman was part of the Chicago Cubs team set in the regular 1981 Topps release.  However Topps added him to their 1981 Topps Traded set as a New York Met (different photograph though).
So there you have it.  Some baseball cards that provided a little ray of sunshine to my collection.  Ironically... none of these guys are smiling... so I took the time to scan one more card James sent my way that sort of features a smile: 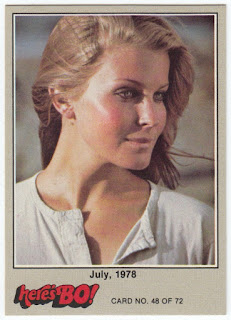 1981 Fleer Here's Bo! #48
I've always been more into brunettes... but I've gotta admit Bo Derek looks good on this card.  Hopefully this card and this post brightens your day a little.  If not...
What kind of things help brighten up your day?
Thanks James for the generous care package.  I hope you decide to eventually publish those posts you've written.  The blogosphere can always use another card blog to follow.
Happy Tuesday and sayonara!
Posted by Fuji at 3:00 PM