It's funny how the mind works.  No matter how hard I try, I just don't associate certain players with certain teams.  Vladimir Guerrero is the perfect example.  Whenever I think about his career, I immediately think of his time in Montreal.  In fact, whenever I target his cards, I won't even consider his Angels, Orioles, or Rangers cards.  He just doesn't seem right wearing any of those jerseys.

Considering he only played one season in Arlington and another in Baltimore, I don't really blame myself.  But Vladimir spent six full seasons with the Angels, which is close to 40% of his career.

Well... with the help of a fellow blogger, that's about to change.  A few weeks ago, Tom over at The Angels, In Order showed off a 1998 Pinnacle Mint bronze coin and card of Vladimir and I mentioned how I had quietly started collecting him.  I also threw in that the majority of those cards were of him featured as an Expo.

A few days later, he emailed me and asked if he could send me some cards featuring him in his Angels uniform.  I happily accepted. 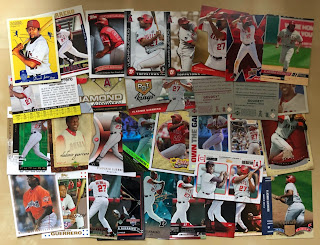 Last week, I received a nice padded envelope filled with nothing but Vladimir.  And with the exception of the 2008 UD Masterpieces card (lower left-hand corner), he's representing the Anaheim or Los Angeles Angels.

Obviously I appreciate each and every card he sent, but I've gotta admit... I favored some more than others based on designs and/or photographs.  So without further adieu... here are some of my personal favorites: 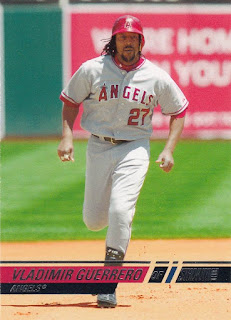 I'll take a clear, well-cropped action shot over just about any other photograph out there. 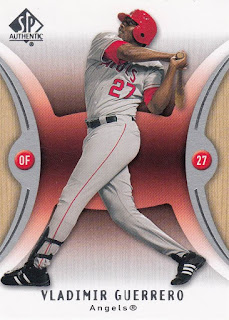 In fact, the 2007 SP Authentic design is average at best, but when you put this awesome, well-cropped action shot on it... it becomes one helluva card. 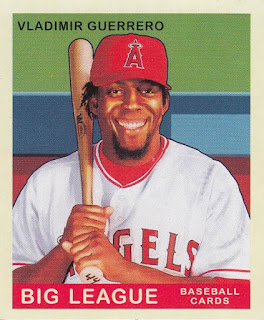 When it comes to portrait shots, that's when the card's design plays a big role.  1933 Goudey is one of the best looking vintage designs around. 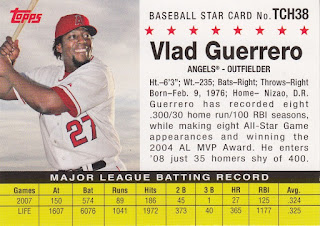 Here's another cool looking throwback.  This time around it features one of the more popular 60's oddballs: 1961 Post. 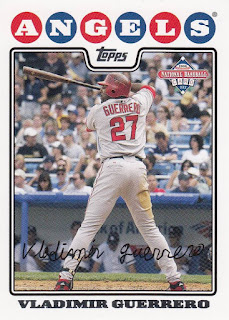 And finally my favorite card in the stack.  I'm a huge fan of the 2008 Topps baseball card design.  I've already mentioned how much I enjoy well-cropped action shots.  Combine these two things on an oddball giveaway and you have something truly special.

Thank you Tom for helping me boost my Vladimir Guerrero collection with these awesome Angels.  More importantly... thank you for opening my eyes and reminding me that Guerrero spent six awesome seasons in sunny Southern California.

Here is today's question of the day...


When you think of the Angels, who are the first players that come to mind?