A Roller Coaster of a Year

2018 was one of the roughest years for me in recent times... and I'm not even talking about what's going on over at 1600 Pennsylvania Avenue.

At work, I'm dealing with a changing of the guard scenario, which isn't necessarily good or bad.  I'm just not a huge fan of change in general.  Plus one of my friends and co-workers for the past 10 years was forced to take an elementary position, which wasn't something anyone at our school wanted to see.

Another one of my friends has been dealing with some serious health problems.  Thankfully his doctors discovered that it isn't leukemia, however he's been in and out of the hospital for the past few months.

Closer to home, my parents are slowing down a lot.  It's part of life and something my siblings and I have been preparing for mentally for quite some time now.  However that doesn't make it any easier to watch.

As for myself... I feel like I spent more than half of the year dealing with back issues.  I've had this problem for years, but 2018 was by far the worst.

On a more positive note, this has been a pretty good year for me in regards to the hobby goals I set for myself a year ago.  I figured I'd kick off the new year by reflecting on those goals and seeing how I did.

Okay.  I'm pretty sure I attempted to do this in January.  Even if I did, I definitely didn't stick to a monthly budget.  That being said, I did keep things under control and spent much less money in 2018 on cards than in previous years. 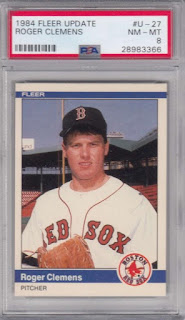 I've been wanting this card for a long, long time and in March I finally picked one up off of eBay thanks to a 20% off coupon.

I picked up Spahn in February and Mathews in March, so the goal was accomplished.  Sadly... I haven't paid much attention to this project ever since.  Might need to do something about that in 2019.

Back in September and October, I was determined to get my hands on a 1979 Kellogg's set.  I ended up piecing together a few partial sets to complete one decent one.  The Stranger Things set was wrapped up last week with help from Ryan (over at Japanese Sumo Wrestling Cards and Menko) who sent me the last 23 cards I needed.  If I had to guess, I'd say that I completed at least one... maybe even two more sets in 2018.  My mind is just drawing a blank right now.

By the way, Ryan runs an interesting series over on his blog where he interviews fellow bloggers about their hobby interests.  I encourage you to head over to his blog and check it out.  And he's always looking for people who are interested in being interviewed.

After ditching a bunch of shows in 2017, I bounced back and attended all three Serramonte Mall Sports Card, Toys, and Collectibles Shows as well as the GT Sports Marketing Show.  If that weren't enough, I also attended the 2018 Las Vegas Toy Con and the 2018 Bay Area Toy Expo and Comic Convention.

Overall... I met five out of the six goals I set for myself in 2018.  I can live with that.  As for 2019, I'm not going to set any specific hobby resolutions other than to have fun, continue to blog on a regular basis, and focus on quality over quantity.

How'd you do with your 2018 hobby goals?  Do you have any specific hobby resolutions for 2019?

As always... I look forward to reading and responding to your comments.

Happy New Year and sayonara!
Posted by Fuji at 3:00 PM