According to Merriam-Webster, one of the definitions for "iconic" is "widely recognized" and "well established".  When I think of iconic cards from the 80's, one of the first cards that pops into my head is the 1985 Topps Mark McGwire rookie card.  It has to be one of the most recognizable cards from that era... if not the most.

The card has lost its luster over the years, but there was a time when my LCS gave customers $100 in store credit for their near mint and centered copies.  These days you can find copies for under $10 any day of the week on eBay.

Oh how the times have changed.

Back in September... right around the 20th Anniversary of The Great Race, I decided to take advantage of the soft market and start looking for an autographed copy of this iconic card.  Unfortunately... I quickly discovered they aren't cheap.  Sometimes they even fetch triple digits.  I actually came close to deleting the saved search, because there was no way I was going to spend that kind of dough.

Then Probstein123 listed an auction for a BGS/JSA authenticated copy a few weeks ago.  I threw in a last second bid and ended up winning this card: 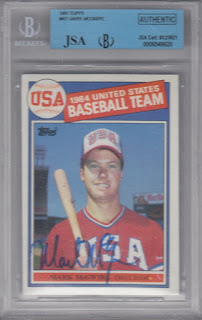 Up until a few years ago, demand for McGwire autographs easily outweighed supplies.  This drove prices well above the century mark.  However Topps and Panini have both included him in their autograph lineup in recent years.  That being said... his signatures still command anywhere from $30 to $100 depending on the print run and product brand.

Well that's it for now.  The holiday break is over and I'm back in my classroom.  Until my next post...

What's the first card that comes to mind when you hear the words "iconic 80's rookie card"?