Tomorrow's election day and if everything goes smoothly, we'll soon find out who will be leading our country for the next four years.

To be honest, I'm not very political.  But if it relates to cardboard, then I'm all over it.  So today, I'm going to show off my 2008 Topps Campaign set that features twelve of the 2008 presidential candidates.

Let's kick things off with the two key candidates in this year's election: 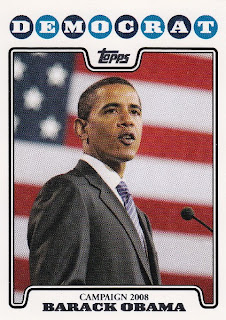 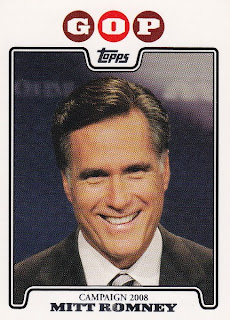 And of course the 2008 Republican presidential nominee...


Two members of the U.S. House of Representatives:

The former governor of New Mexico...

The former governor of Arkansas...

And last, but not least... a Saturday Night Live host and one of the most famous cross dressing mayors in New York City's history...

So what do you think?

There are actually a few cards I've left out of my original post, because they're short prints, I couldn't afford:  A Pair of Palins, the 2007 Nobel Peace Prize winner, and of course The Terminator.

I'm sure there are super collectors out there who have the whole sixteen card set.  But one card you don't own is this 1 of 1, rare sticker auto of a guy who will never run for office: 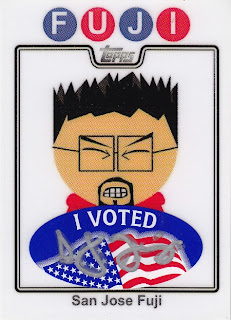 So take that... Mr. Super Collector!

When I busted a box of '08 a year or two ago, a few packs in I pulled the regular Obama card, and I immediately gave it to a friend who I knew would appreciate it. Then towards the end of the box I pulled the Gold Parallel of Obama, and I still have that in my PC to this day! Definitely some fun pulls, and you're absolutely correct about it being a great design.

I know I'm in the minority, but I'm kinda bummed Topps didn't do more with the election this year. Yeah I know there is that predictor contest, but all the cards are pretty much the same. Plus in 2008 you had the first couples cards too.

Oh and your missing a few cards in the set too.

You're right, CB. Here's the checklist: http://www.beckett.com/baseball/2008/topps-campaign/#srrowNum=50
Although I'm wondering if he didn't include the others as they have no involvement in this year's election like those he did include.

By the way, I actually pulled the Al Gore from another hobby box of Series 2 and managed to sell it for decent money on eBay since it appears to be short-printed.

The Obama card is awesome. Love how they photographer captured the flag in the background. Congrats on pulling both of those cards from your box.

I haven't busted any 2012 stuff, so I wouldn't know. But I'll have to check out the predictor contest cards.

Yeah... I know that there's four more cards. But they're pretty tough pulls, so I didn't count them as part of my set.

One of these days, I'll probably pick up the Palins... but the Arnold and Gore cards go for too much money.

These cards are an inspiration. A few big wrongful death cases and I'll have the bankroll to run for Senate. Then, get to Washington, kiss the right butts, and seek the nomination. Then in a Country full of problems, I may eventually get my own baseball card and fulfill a childhood dream. Then drop out before all my skeletons coming pouring out.

I'd put this subset together (I collect presidential stuff) but then I'd own a card of Mike Hucabee and I don't think I could stand it. ;-)

Great plan... but I think I can save you some time. Head over to the Topps website, pay a few bucks and make your own card like me. That way your skeletons are tucked away nice and neatly ;-)

Yeah... win some... lose some. You could always decorate his card with a mustache, some lipstick, and a pair of glasses.