Today's post features a monumental purchase in my collecting history.  The card in this post is the most expensive card I have ever purchased over on COMC.  It took place back in the summer of 2011 during a time when I was scouring the site for deals on graded cards.
Unfortunately I knew back then that this card was expensive ($98.57), but I loved how clean this fifty-five year old piece of cardboard looked.  A few years ago, I met a guy who specifically seeks vintage cards that look like they've been freshly pulled from a pack.  He's one of those collectors who values edges, corners, and lack of creasing over centering and staining.
I'm sure he'd appreciate this card: 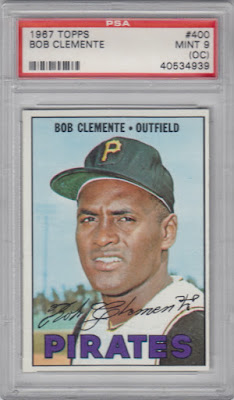 1967 Topps #400
I was blown away by the overall condition of this card... and the fact that it featured one of the most popular baseball players of that era only made the card more desirable.  As for the poor centering and the OC qualifier... that's what kept the price of this card under triple digits. 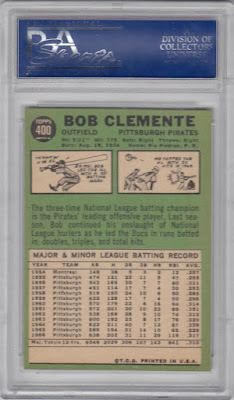 Assuming this card was pulled from a pack back in 1967, the lucky collector would have added a card of the reigning National League Most Valuable Player.  That year he finished third behind Orlando Cepeda and Tim McCarver in NL MVP voting after having another stellar year highlighted by 103 runs scored, 209 hits, 110 runs batted in, a .357 batting average, a .554 slugging percentage, and the highest offensive WAR in the National League.  He also won his seventh consecutive Gold Glove Award that year.  Dude was a stud.
Exactly fifty-five years ago, the Pittsburgh Pirates were in Cincinnati to face the Reds.  Clemente had a career day at the plate going 5 for 6 with a double, a home run, and four RBI's.  On Thursday, MLB will celebrate Roberto Clemente Day and pay homage to the 50th anniversary of his tragic passing.
I was only a few months old when he died in the plane crash while attempting to deliver aid to earthquake victims in Nicaragua.  However I'm grateful that his legacy continues to be passed on to fans.  He will forever be remembered for being a humanitarian as well as a hall of famer.
When it comes to our hobby, I can't imagine there are many collectors who don't appreciate his cardboard.  I know that the card featured today is considered a cornerstone card to my 60's collection.
Okay... here are your questions of the day...
Do you have a favorite Roberto Clemente card in your collection?
When it comes to card condition, what's most important to you?  Nice centering, clean edges, sharp corners, lack of creasing or staining?
As much as I love the featured card, my favorite is actually his 1956 Topps card.  And when it comes to condition, I think it depends on the individual card.  Most of the time an extremely off-centered card would bug me, but when the rest of the card looks this good... I'm able to over look the issue.
Happy Tuesday and sayonara!
Posted by Fuji at 3:00 PM

Woah, that is a great card!! As luck would have it, my favorite Clemente card in my collection also probably happens to be the most valuable card I own. Its a 1956, graded 6.5 (by Beckett). It is one of the very very few graded cards in my collection as I can't get myself to pay the huge premiums for graded cards. It's a beautiful card, I can certainly see why it would be your favorite Clement!

Exactly 55 years ago I was 362 days old.(My birthday is Friday). I appreciate all Clemente cardboard. Condition, I obviously want the nicest card I can get, but I prefer zero creasing, writing or paper loss. I like good centering, but not a requirement, I even tolerate fuzzy corners.

Back in high school, an coworker named Jerry at a grocery store was talking baseball with me and he mentioned that he knew Clemente. Said he was a great ball player but an even better human. Always took time for the kids in his hometown during the off-season.
Another coworker of mine gave Jerry Roberto’s 1987 Donruss puzzle card. Jerry said he didn’t need a card of Roberto, he had all of the memories in his heart, and let me have the card. I still have it, and although it’s not worth much, it was owned for a minute or two by a guy who was friends with the great Roberto Clemente.

'56 Clemente is the favorite one I own.

Condition preferences in order: 1. Lack of foreign substances (marking, etc.); 2. Lack of creasing/staining; 3. Nice corners; 4. Edges; 5. Centering
Centering is the biggest hoax perpetrated on the hobby the last 20 years, next to grading, of course.

Also, I'm going to assume you've shown that card before because otherwise I can't believe it took you 11 years to post it.

I have one Clemente, the 1968 Managers Dream with Oliva and Cardenas. Would love a real vintage base card; don't expect to scratch that off anytime soon.

Condition preferences? Nice printing is most important to me. Good color/registration trumps almost everything unless the card has been abused with paper loss or marking. The fact that none of the grading companies address the print quality in the subgrades is one reason I don't care about grading.

My only playing days Clemente is his 1970 Topps. So it's my favorite of the ones I have. Though his 2017 Topps Fire is the most aesthetically pleasing in my collection.

'73 Topps is still my favorite Clemente - and my favorite baseball card, period. Hoping to find a beat-up '55 Clemente that doesn't require me to sell a limb one of these days (might be a pipe dream).

Condition issues in general don't bother me a ton, but if I had to pick one to avoid I'd probably go creasing/staining. I'll usually pony up a few extra dollars to get a crease-less copy, if possible. I have to say I don't understand the centering thing - I get it if it's like 95-5 or something, but does 60-40 centering really bother people?

I'm one who will always choose a good deal on a not-so-nice copy, but I suppose lack of creasing and staining would be the biggest thing.

When it comes to condition, lack of creasing is probably the most important. I'm kind of surprised that '67 you have got the OC mark. I've seen a few others with worse centering that did not get the OC.

Great card! While I don't really care for the set, I've always like the 1973 Topps Clemente.

I only have Clemente's from 69-73 but I always have loved the 72, first time I saw a card with the ball in the air where he is about to catch it.1-Staining 2-centering 3-edges 4-corners.

That is fantastic. Al the street vendor had a '67 Clemente - in nice shape but not slabbed - that he sold for about $100, maybe $150. I remember the guy who bought it paid for it in installments. But yeah I used to look at it every time I was over at his table.

In terms of condition, as long as the card is mostly intact and the picture is not too badly obscured by writing, I'm good.

I'm with the crowd about stains & creases being the worst thing. I don't mind off-center, esp for big star cards, but it can't be crooked or "diamond cut". After that, a little corner wear gives it personality. If it's too perfect, it seems fake.

Exceptional stuff!! Roberto Clemente items always catch my eye. He was a special player and an even more special person.

I went to an antique show a decade ago and took a flyer on a Topps poster from the 70’s. Still a favourite item in my collection.

I’ve always been a bit uncomfortable seeing items with “Bob” printed vs Roberto. But, I assume it was just a sign of the times.

Wonderful card. Thanks for sharing.

I have a few Clemente cards. I have always been bothered by the fact that Topps put "Bob" on his cards, otherwise I might own more. I think my two favorites are 1971 and 1973 for that reason.

I will take a card that is off center over something with creases or stains.

I feel like centering is most important to me regardless of edge and corner wear. That is a nice Clemente!

Eye appeal is most important for me.

Fave Clementes in my PC are a '66 Kahn's Weiners and a '68 KDKA Team Issue that was once owned by Roberto.