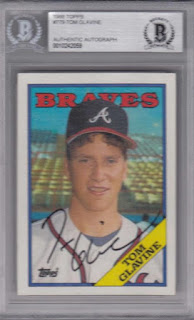 But did you know that he was drafted with the 69th overall pick in the 1984 NHL Draft by the Los Angeles Kings?  He was chosen ahead of two guys who went on to have hall of fame careers themselves:  Brett Hull and Luc Robitaille.

Anyways... this was today's tidbit of baseball trivia and my way of showing off a trio of hockey cards I've recently added to the collection.  Don't worry... I'll keep things short since there aren't a lot of people interested in hockey cards among my readership.

Let's start things off with a whale...

Patrick Marleau is one of my all-time favorite hockey players and this is his very first trading card.  This card has been on my eBay watchlist for years and it doesn't pop up very often.  So when I saw it with a $4.50 BIN price tag I got excited.  The only problem was the seller was charging $3.50 for shipping.

I decided to see if the seller had anything else for sale that I could use to justify the shipping rate.  That's when I found this for $1.12 (+ 50¢ shipping):

This card won't mean much to anyone unless you collected hockey cards in the 90's.  Simply put... these Ice Blue parallels were tough to pull.  This is a very nice addition to my Joe Sakic PC, which I haven't officially announced... but have been actively building for years.

The final card is my most recent California Seals purchase: 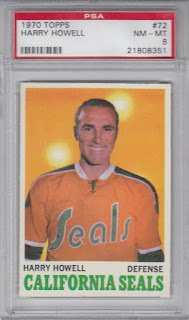 This card purchase was inspired by two bloggers:  Joe (@ The Shlabotnik Report and Jay @ Card Hemorrhage).  Both have featured Seals cards on their blogs which reminded and motivated me to buy this card. 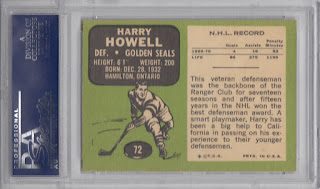 Harry Howell is one of only a handful of Seals players who is inducted in the Hockey Hall of Fame, although he is primarily known for his years with the New York Rangers.

The NHL restart begins today.  The San Jose Sharks didn't qualify, so I probably won't be following things too closely.  But best of luck to those of you who have teams in the hunt.

Do you follow hockey?  Do you collect hockey cards?  Do you have a favorite team and/or player?

It'll be interesting to see what percentage of my readership actually cares about the sport. 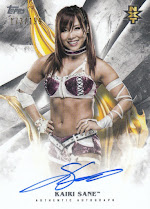 2019 Topps WWE Undisputed Autographs #A-KS
2019 Topps WWE Undisputed Autographs #A-SU
I've made it pretty clear that I'm not an avid wrestling fan, but over the past year or so... I've casually followed Asuka and her tag team partner Kairi Sane.  Earlier this week, Kairi said goodbye to her colleagues and fans as she plans to head back to Japan to spend more time with her family.  Sayonara Kairi!  You will be missed.
Posted by Fuji at 3:00 PM