The new school year is just around the corner for me.  In six days, I'll have the opportunity to meet my next batch of students.  This year will be a little different, since I won't actually meet them in person... but hopefully I'll be able to establish some sort of bond with them.  My colleagues and I are entering uncharted waters and it's a little scary, but these are the cards we've been dealt and now it's time to see what we can do with them.
One thing won't change though.  I won't be naming favorites.  It's inevitable.  Every year I get asked by at least a handful of students, "who are your favorite students?".  My responses vary from "I don't have any" to "you'll never know", but I never respond with specific names.  Do I have favorite students?  Sure.  But there's no point in hurting the kids' feelings by revealing who they are.
Athletes are totally different.  They don't know me and could care less about whether or not this card blogger likes them.  That's why I thought it'd be fun to sit down and rank my favorite athletes of all-time.
After creating a list of candidates, I quickly discovered that comparing Kobe Bryant to Ramon Laureano is a lot like comparing apples to oranges... which proved to be much more challenging than anticipated.  Ultimately I just went with my gut instinct.  You'll quickly see that nostalgia plays a huge part in my rankings.
I'm guessing that if I were to try this again in the future, things would look a little different depending on the season and my mood.  But for today, August 13th, 2020, here are my Top 10 Favorite Athletes of All-Time:
#10:  Steve Carlton 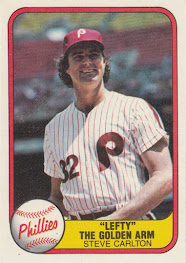 1981 Fleer #660
Carlton was one of the best left-handed pitchers of his generation.  As a fellow lefty, it was only natural for me to root for him as a kid.  By the way today is International Left Handers Day.  Thanks Ryan for reminding me of this special day.
#9:  Byron Scott 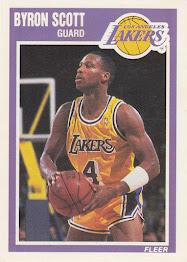 1989-90 Fleer #78
Out of all of the Showtime Lakers, Byron was my favorite.  I loved the energy and passion he displayed on the court... and that jump shot of his was like poetry in motion.
#8:  Greg Maddux 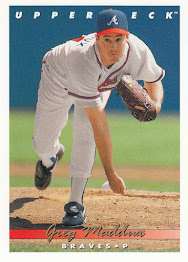 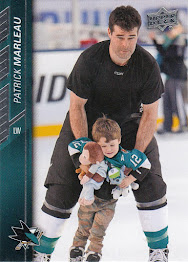 2015-16 Upper Deck #155
I feel like Patty should be higher on this list, since he's my all-time favorite San Jose Shark.  But I struggled to justify ranking him higher than the six guys ahead of him.
#6:  Kobe Bryant 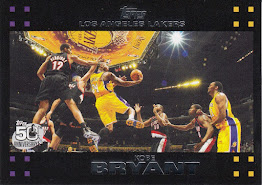 2007-08 Topps #24
He might have rubbed people the wrong way, but he was the epitome of hard work and passion.  Those are two traits I admire in my students and in professional athletes.
#5:  Brett Favre 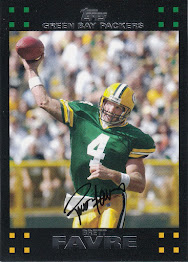 2007 Topps #19
Favre has stressed me out more than any other player on this list... with his crazy passes.  And I thought I'd never forgive him when he signed with the Minnesota Vikings, but time heals all wounds.  These days I just focus on remembering all of those touchdown passes he threw to Mark Chmura, Robert Brooks, Antonio Freeman, Donald Driver, and Sterling Sharpe.
#4:  Kurt Suzuki 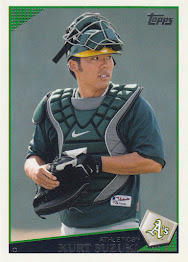 2009 Topps #622
I had a hard time ranking Kurt, because I wasn't sure where he fit among all of the legends on this list.  At first I had him ranked behind Kobe, Favre, Marleau, and Maddux.  But then I remembered just how much I enjoy rooting for this guy... even when he's not on one of my favorite teams.
#3:  Steve Largent 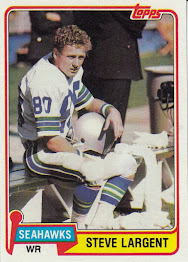 1981 Topps #271
Largent was my favorite football player growing up... and nothing has changed over the past four decades.
#2:  Rickey Henderson 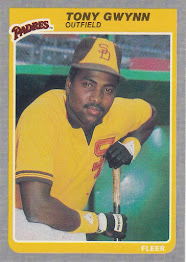 1985 Fleer #34
Yeah.  No surprises here.  If you need an explanation for why Gwynn is #1 on this list, then you probably don't read my blog on a regular basis.
It'll be fun to look back on this post in a year or two to see how much things change, but I doubt there will ever be a guy who will knock Mr. Padre out of the top spot.  Actually, I'd say that the Top 3 are pretty locked in... but #4 through #10 are less stable than the Beckett Hot/Cold lists of the 80's and 90's.
What about you?
What are your favorite athletes of all-time?
Leave your list down below.  I'd love to see it.
Happy Left Handers Day and sayonara!
Posted by Fuji at 3:00 PM