Slipped Through the Cracks

When I was a little kid, I remember watching movies like Tora! Tora! Tora! and The Bridge on the River Kwai with my parents.  Since then, I've been a huge fan of almost anything involving World War II and I'm one of those people who get excited whenever I have the opportunity to watch something new.

While browsing Amazon Prime this weekend, I stumbled across A Bridge Too Far which stars legends like Robert Redford, Gene Hackman, Maximilian Schell, Anthony Hopkins, Sean Connery, Laurence Olivier, James Caan, and Michael Caine.  With that many Academy Award winners featured in this film, I was shocked that I had never heard about this movie.  But with so many movies released each year, it's bound to happen.  Some movies slip through the cracks. 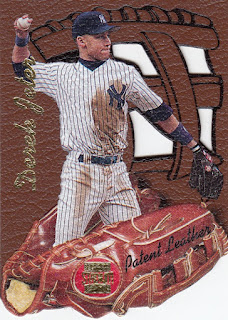 In 1997, Topps created a really cool insert set for its Stadium Club product called Patent Leather.  The die-cut cards which were printed on faux leather card stock are truly beautiful.  The first time I saw one of these was over on A Penny Sleeve For Your Thoughts less than a month ago.  I was blown away.  In fact, I knew right then and there that I wanted one for my collection.

I immediately headed over to COMC, but there weren't any good bargains to be had.  A week later, I stumbled across this binder at the De Anza Flea Market: 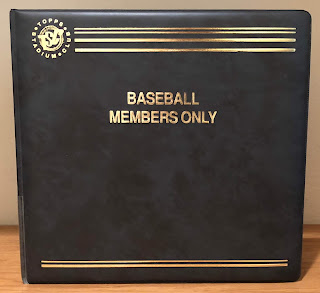 The Baseball Card Gods were smiling down upon me.  Inside was a complete 1997 Stadium Club Member's Only set, which happened to include the entire Patent Leather insert set as well.  Collectors could obtain these inserts in one of two ways.  Pull them out of Series 2 retail packs or become a Stadium Club member and purchase the Member's Only set. 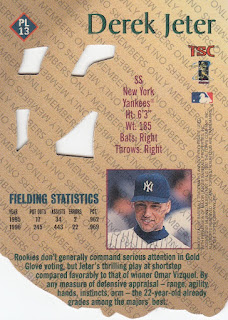 The cards are identical in appearance with the exception of the Members Only watermark on the back.

Here's the set in its entirety: 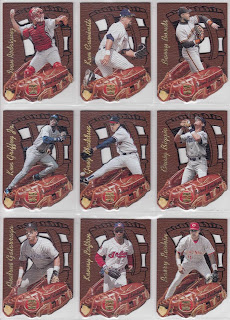 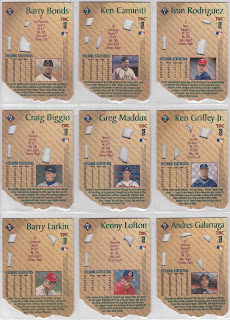 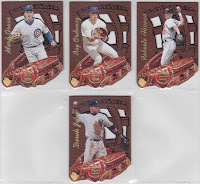 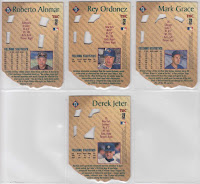 Obviously this set is centered around guys who were known for their fielding ability.

The thirteen players on the checklist combined to win a total of 87 Gold Glove Awards during their careers.

As of the right now, only six of these guys are hall of famers.  However it's only a matter of time before Jeter gets enshrine... and hopefully Bonds will too.

But honestly... the thing that makes this set so intriguing isn't the checklist.  It's fact that it took me over twenty years to discover one of the coolest looking inserts from that era.  But that's the beauty of our blogosphere.  Every day we're blogging about our favorite cards... and sometimes we discover cool stuff that have slipped through the cracks of our collections.