When it comes to collecting sports cards, there's truly no shortage of ways to collect.  A few years ago, I started a collection of autographs featuring famous left-handed athletes since I'm a proud lefty myself.  Then about a year ago... I took this project one step further when I began targeting an autograph of every left-handed Cy Young Award winner.

Warren Spahn was the second pitcher to win the award in 1957, but was the first left-handed pitcher to accomplish the feat.

Unfortunately there are six left-handed Cy Young Award winners signatures that I'm currently missing and Johan Santana happens to be one of them.  He has a few signatures out there, but I'm not ready to spend $20+ on an on-card signature.  Maybe one day.

Some of these guys are a little easier to find than others, but I'm confident that I'll be able to eventually add them to the rest of these guys: 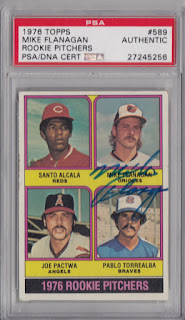 And the newest addition to my collection...

Who will be the next southpaw to win the Cy Young Award?

Do you think it'll finally be Chris Sale?  How about Kyle Freeland (who was gosh darn good at Coors Field)?  Or maybe Kershaw and/or Snell will bring home another one?

I realize it's not very likely... but I'd love to see Madison Bumgarner (unless he's traded to the Yankees) bounce back and win the National League Cy Young Award at least once during his career.

By the way, if you're interested... I found a really cool website that's dedicated to left-handed baseball players.  It has some pretty interesting stuff if that's your cup of tea.

Well... that's it for today.  Only one more day and one step closer until the weekend.

Until then... happy Thursday and sayonara!
Posted by Fuji at 3:00 PM