Have you ever walked into McDonald's and there's a guy in line who keeps letting people go in front of him, because he can't figure out what he wants?  That's me.  I'll go into McDonald's thinking I want a Filet-O-Fish and end up walking out with a Big Mac.  The same thing applies to sports cards, because that's who I am... Mr. Indecisive.

That's why if you ever check out my collection on my website... you'll see I collect a little bit of everything.  Vintage?  Yup.  Autographs?  I've got them too.  Sets?  You betcha.  I've got team PC's, player PC's, non-sport PC's, hometown PC's.  Heck... I even collect damaged cards.

Honestly... sometimes it's very challenging for me to decide which collection I want to spend my hard earned money on.  But last night, when P-town Tom asked us to write a post about our favorite 2016 card, it was one of the easier decisions I've had to make.

2016 Topps Strata Signature Patch cards are one of the coolest sets I've seen in recent years.  They're essentially Upper Deck Shadow Box knockoffs, which combine an on-card autograph and a swatch of game worn jersey encapsulated within multiple layers of acetate.  The end result gives off a three dimensional look that is truly gorgeous.

Back n August, I rolled the dice and purchased a redemption card off of eBay for the Rickey Henderson card.  I immediately turned around and redeemed it.  About a month later, I received this in the mail: 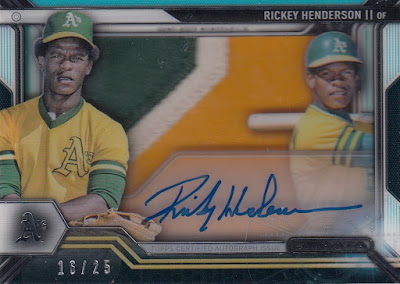 Isn't it awesome?  I was very happy with this purchase... even if it was pricier than 99% of my single card purchases.  In hindsight... I actually got a pretty good deal.  Recently collectors have had to pay over $125 for their copies.  However... I was fortunate enough to pick this card up for only $73.88 (+ $2.75 shipping).  But it's not really about the money... since this card won't be leaving my Rickey Henderson collection anytime soon.

If you're willing to write up a short post explaining your answer, you can enter a contest over on P-town Tom's blog.  Just leave a link in his comment section.