This Ain't No Joke

They're all enshrined in Cooperstown and if you head over to COMC, you can pick up any of their autographs for $10 or less.  On the other hand, you can be like me and spend ten of your hard earned dollars on an autograph of a career .215 hitter: 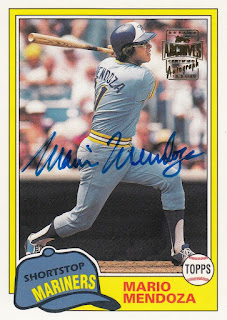 Now before you start calling me the "April Fool", give me a chance to defend myself.  I've been a fan of baseball longer than just about everything else in my life.  In fact... off the top of my head... I can only think of three things (outside of people) that I've liked longer than baseball: food, music, and television.

With that fanfare comes my passion for collecting baseball cards.  I spend most of my "hobby" budget on my player and team collections, but every now and then I will focus on other things.  This time it was owning a piece of baseball history. 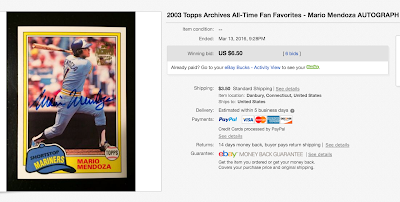 A few weeks ago, a caller on the radio mentioned the Mendoza Line, which made me wonder if Mario Mendoza has a certified autograph.  As luck would have it... he does.  In 2003, Topps included him in their Archives Fan Favorites autograph set and there happened to be a couple listed on eBay.  A few bids later, ten dollars poorer, and I was the proud owner of an on-card autograph of the Mendoza Line namesake. 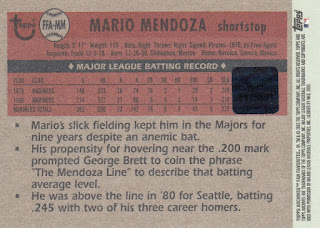 And I have absolutely no regrets either.  Kinda makes you wonder why I'll spend so much money for the signature of a below average hitter... while refusing to pay less than a buck to complete a set (my 1984 Donruss Mickey Mantle puzzle) that I've been building for the past few years.  Honestly... sometimes I don't even understand myself.