Exceptions to Every Rule

For years... I obsessed over memorabilia cards.  The thought of owning a piece of sports history that was embedded into a trading card made me giddy like a schoolgirl.   I still enjoy memorabilia cards... but vague COA's and overuse of event worn materials have sort of lessened their luster.


The exact same thing can be said for certified pack pulled autographs.  Remember when you pulled an autographed card out of a pack and smiled at the thought of the player actually touching the same card you're holding?  It's like you and the player made a personal connection.

These days... more often than not... card manufacturers are using stickers signed by the athlete instead of actually having the players sign the cards.  It's an issue many of us have addressed and although I understand why companies have gone in that direction... it's still not my cup of tea.

But there are exceptions to every rule and today I'm going to give you five scenarios where I'll gladly add a player signed sticker to my collection: 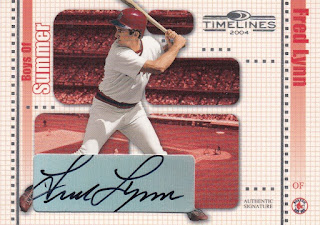 Fred Lynn isn't enshrined in Cooperstown... but he wasn't a nobody either.  He was a 9x AL All-Star, a 4x Gold Glove Award winner, the 1979 AL batting champion, the first guy to win the ROY Award and MVP Award in the same season, and the only MLB player to hit a grand slam in Mid-Summer Classic.

All of these accomplishments took place during my childhood when baseball made its biggest impression on me.  That's why I just couldn't pass up the opportunity to grab this on-sticker autograph when I saw it on sale for $2.50.

2.  The person doesn't have any on-card autographs. 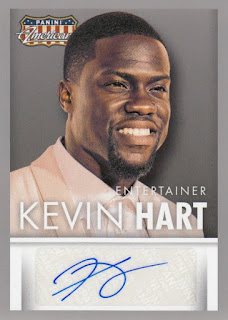 Kevin Hart is hilarious and one of my favorite comedians.  Plus he's a fellow member of the Short Men of America Club.  Unfortunately... he doesn't have many certified autographed cards and the ones he does have are all on stickers.


3.  The person has on-card autographs, but they're too expensive. 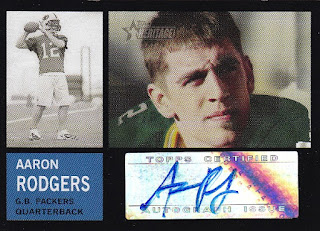 I was out of the hobby from 2001 to 2007, so I totally missed the boat on guys like Albert Pujols, Ichiro Suzuki, Lebron James, Sidney Crosby, Alex Ovechkin, and Aaron Rodgers.  By the time I reentered, autographs of these guys were way out of my price range.

It would be nice to own a Lebron or Pujols autograph, but they aren't high priorities at the moment.  However... as a diehard Packers fan... I had to own a signature of Mr. Rodgers.  Sadly by 2008 most of his on-card autographs were three figures, which was way too expensive for my budget, so I settled for a pair of his more affordable sticker signatures.


4.  The card company is creative with their stickers. 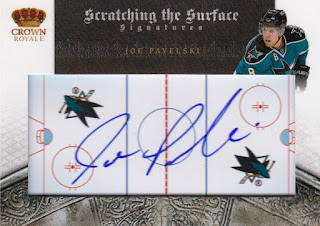 Meet Joe Pavelski.  He's the current Sharks' captain and the team's leading goal scorer.  Guess what?  He's never held this card.  Instead, Panini handed him a sheet of cool looking stickers for him to sign and at the end of the day... they produced a great looking card.

The sixty-four dollar question is... Why don't card companies do this more often?

All three of these cards were given to me by fellow collectors and I'm proud to call them a part of my collection.

So what about you...

Are you a stickler for non-sticker autographs or do you make exceptions too?

Happy Monday and sayonara!
Posted by Fuji at 4:00 PM