The Joy of Sorting on Your Office Floor 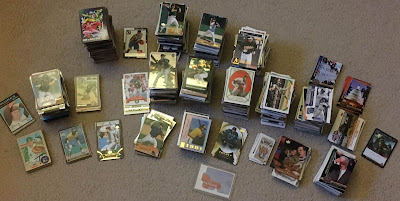 When I was a kid, one of my favorite things to do was pull out my box of baseball cards and sort through them.

My highest priority was to stack them by teams.

That way, I could easily find my favorite players and read their stats on the back.

After a few years... I became obsessed with collecting rookie cards of whoever was considered hot at the time.  This trend lasted throughout most of the 80's.

In the early 90's, I expanded my collecting horizons to other things such as comic cards.  Twenty-something years later... I'm still trying to complete those Marvel Universe sets.

Eventually I grew up and sorting cards became less of a priority.  Paying off my financial debt, focusing on my career, and buying a place replaced collecting sports cards.

Then in 2008, I was fortunate enough to be dating a girl who actually supported and encouraged me to collect cards, so I jumped back into the hobby.  At the time, cards of politicians were gaining popularity... which I thought was totally awesome.

Over the years... I've shifted my collecting interests for the umpteenth time.  And these days... I mostly enjoy targeting a unique oddball, an on-card autograph, or a beautiful looking vintage card for one of my player or team collections.

But that doesn't mean I can't appreciate sitting down on my office floor on a Saturday afternoon... sifting through a few thousand trading cards that were generously sent to me by a fellow collector. 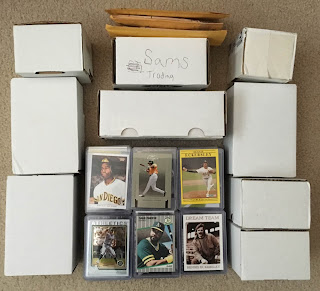 Thank you Woody for helping me take a stroll down memory lane.

Happy Saturday and sayonara!
Posted by Fuji at 9:45 PM