All of these athletes are guys I collect... and all are either in their sports' respective hall of fames or will eventually be joining them.  I'm not alone.  There's a reason you see kids wearing jerseys of big names more often than bench players... and why autographs of superstars tend to sell for more money than scrubs.  It's fairly simple... they're more popular.

But thanks to Adam over at Cardboard Clubhouse, today I'm going to take a few moments to show some appreciation some of the other guys who shared the field with the guys you see listed above... because simply put... semistars need love too. 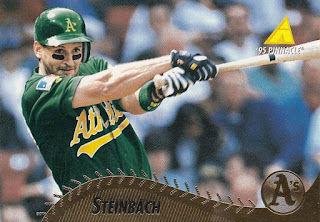 When Terry Steinbach became eligible for Cooperstown in 2005, he received less than 1% of the votes.  However... Oakland A's fans rewarded him in 2008 by selecting him to the their 40th Anniversary Team and rightfully so.  He played eleven seasons in Oakland, was a three time all-star, and caught more games in an Oakland A's uniform than any other catcher. 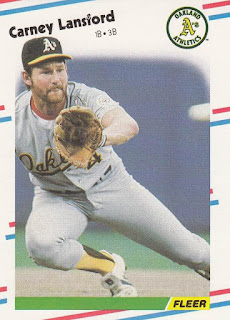 Carney Lansford is in the same league as Steinbach.  Never considered a HOF candidate... however he's very much appreciated by Oakland fans.  With the exception of 1991, Lansford held down the hot corner in Oakland from 1983 to 1992, while collecting over 1,300 hits.  He too is a member of Oakland's 40th Anniversary Team. 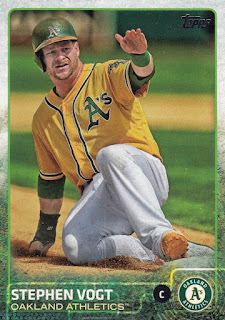 At the Oakland Coliseum, fans believe in Stephen Vogt:

Can you blame us?  Last season he led the team in game winning RBI's and was the lone positional player to represent the Athletics in the All-Star Game.  Future hall of famer?  Unlikely.  Current fan favorite?  Heck yeah.

The same thing applies to the gridiron... 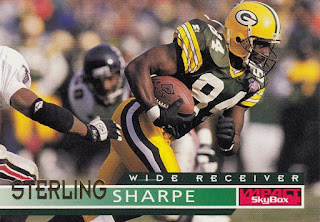 What if Sterling Sharpe wasn't forced to retire due to injuries?  That's a question Packers fans have been asking themselves since 1994.  He played seven seasons for the Green Bay Packers and during that time he led the league in receptions three times and receiving touchdowns twice.

In 2002 he was inducted into the Green Bay Packers Hall of Fame... but he's still waiting for Canton to call. 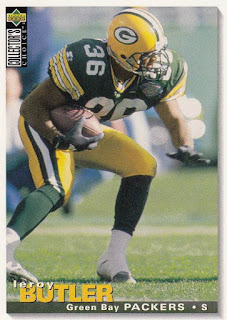 If you watch football, then you've heard of The Lambeau Leap.  But do you know who invented it?  If you said Leroy Butler then I tip my cap to you.  Butler played twelve seasons for The Pack and was definitely a fan favorite.  He made Pro Football Hall of Fame's 1st Team All-1990's Team... but like Sharpe... he has yet to receive his gold jacket. 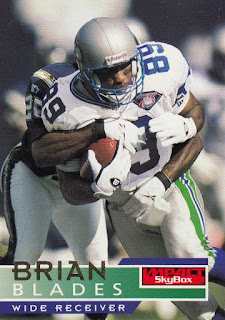 Last... but not least we have Brian Blades.

He only made one Pro Bowl.  He was never close to leading the league in receptions.  And he only caught 6 or more touchdown receptions in a season once.  But he's has the 2nd most receptions and receiving yards in Seattle Seahawks franchise history... and The Twelves love him for it. 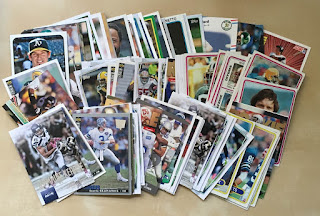 Thank you Adam for this generous package of Oakland Athletics, Green Bay Packers, and Seattle Seahawks trading cards.  It brought back a lot of good memories.  I've added you to my growing list of Super Traders care packages that I need to build and ship out.  Please stay tuned.

Happy Saturday and sayonara!
Posted by Fuji at 11:00 PM