Prepare yourself to be blown away by some super awesome trading cards.  Seriously.  These aren't pretty good.  They aren't totally cool.  They're legitimately called "Super Awesome".

But before I get to them... I want to apologize for something that is the opposite of awesome: my sports card scans.

About two weeks ago, I was encourage by Canon to update my software... so I did.  Since then... my scans are grainy and the actual scanning process is taking me two to three times longer than before.  I tried to delete the software and go back to the old format, but Canon keeps telling me my software needs to be updated.  So please bear with me and my subpar scans until I can figure out the issue.

Okay... let's take a look at some Super Awesome cards: 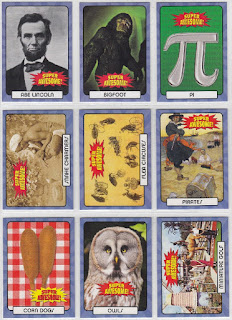 Released by a novelty store called Archie McPhee back in 2010 this set contains a bunch of random things that range from super awesome to truly head scratching. 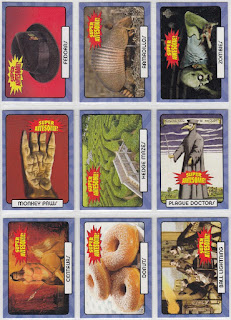 Back in November, I found three packs of this stuff at the De Anza Flea Market for 25¢, but if you're interested... you can find packs and boxes of these trading cards on their website. 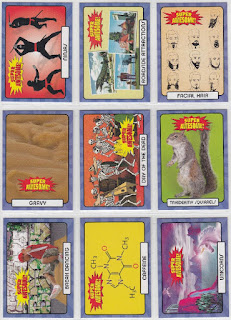 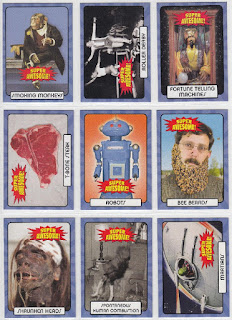 The pack wrapper states that these are "First Series" cards, but from what I've seen there hasn't been any other series released. 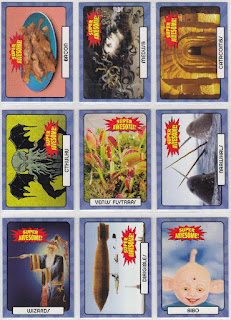 With only fifty cards in the set, I figured it would take seven to ten packs to build the set.  However... I ran into some collation issues and pulled quadruples of some cards, while barely completing the set on my thirteenth and final pack. 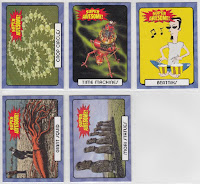 Overall... I like the set.  It's definitely unique and different... although I only reserve the title of "Super Awesome" for a fraction of the cards listed on the checklist.

Corndogs rule.  They're easily my favorite thing to eat when I go to amusement parks.  Plus they remind me of my childhood when every summer my friends and I would go hang out at the county fair.  Good times.

I was cursed with a "baby face", so ever since I was capable of growing facial hair... I've done it.  Plus when I was growing up... some of the coolest guys in baseball had facial hair.  Eddie Murray's mutton chops were super awesome!  Rollie Fingers' handlebar mustache was super awesome!  I could go on... but you get the point.

If you were to ask me to sum up my middle school years with two words... I'd probably go with "video games".  But "break dancing" was super awesome too.

Rounding out my favorites is card #37:  BACON.  Bacon fried rice.  Bacon covered baked potatoes.  Bacon and eggs.  BLT's.  Chocolate covered bacon.  Yeah... it's one of my favorite things to eat and definitely qualifies as being super awesome.

Hall of famers who played for both the Oakland A's and San Diego Padres are super awesome!

Fleer stickers from the 80's and 90's are super awesome! 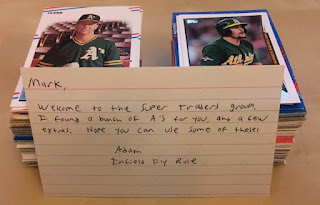 And of course... the Super Traders package that Adam over at Infield Fly Rule is super awesome!

Thanks Adam!  I've got your package of Colorado Rockies packaged up.  I just need to make my way down to the post office... which should be within the next few days.

Happy Saturday and sayonara!
Posted by Fuji at 9:00 AM