Back when I was a sophomore in high school, two of my high school buddies swapped girlfriends.  It was the weirdest thing.  Both were getting bored with their relationships... and I guess the girls were too.  It was so hard for everyone (except them) to wrap their heads around the trade... but all parties were happy, so I guess it could be considered a success.

Fast forward to 2011... which is the year I read Josh Wilker's book, Cardboard Gods.  If you've never heard of this book, it's a very interesting read.  Wilker utilizes baseball cards from his childhood to write about his life. 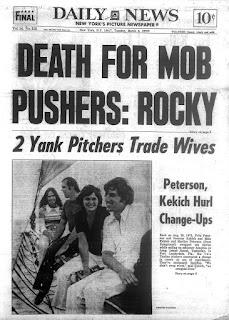 One of his stories involves two New York Yankees pitchers (Mike Kekich and Fritz Peterson) from the 70's who garnered national attention when they swapped entire families: wives, children, and dogs.  According this article, the exchange started back in the summer of 1972, but was made public on March 4th, 1973 when Kekich addressed the media in the morning and Peterson in the afternoon during Spring Training.

Forty-three years later... their names are still tied to one of the weirdest trades in baseball history and every time I hear or read about it... I can't help but be reminded of my two high school buddies... Rob and Paul.

Speaking of trades.  Cards are being exchanged across the card blogging world at a faster rate than ever before... thanks to Wes and his merry band of Super Traders.  I've already received my fair share of packages and today is the perfect day to share Tony L's: 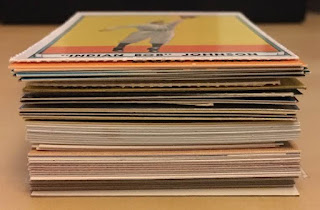 Tony is the official King of the Oddballs and since today is Wacky Wednesday... I figured it was the perfect time to show of some of the cards he sent my way.  But before I get to that... just look at that stack.  Doesn't it remind you of a Jenga tower with all of those nooks and crannies created by a variety of different sized cardboard?  I knew before opening his team bags that this package was going to be fun to sift through and he didn't disappoint. 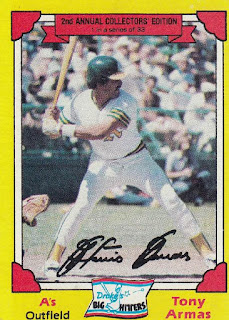 Drake's trading cards are a classic run of oddball issues produced by the baking company from 1981 to 1988.  I not 100% sure how these were distributed, since there aren't any of their bakeries in my area and I've never actually seen any of their products.  But I'm assuming they were inserted into boxes of their snacks much like the Mother's Cookies from the same era. 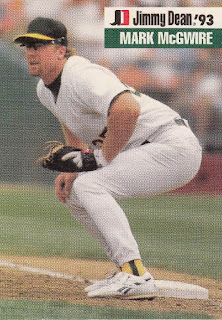 Jimmy Dean trading cards from the early 90's are pretty awesome.  If you can look past the lack of logos... you'll notice a pretty amazing card that features perfect posture, sweet shades, and impeccable cropping.  Plus I can't see one of these oddballs without thinking about their amazing breakfast sandwiches. 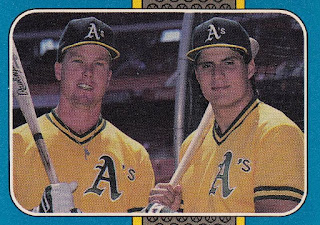 The Boxed Set Era peaked in the 80's and I'm glad I was able to witness it first hand.  From 1985 to 1987, Donruss produced and released a boxed set called Donruss Highlights at the end of each season. As the name suggests, each 56 card set reviewed and highlighted the key events and athletes from that season.

This particular card honors The Bash Brothers who became only the second pair of Oakland Athletic sluggers to each hit 100 RBI's in the same season.  The previous duo?  Reggie Jackson and Sal Bando in 1969. 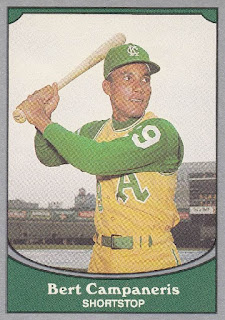 The Pacific Legends products of the late 80's and early 90's remind me of the SSPC sets of the 70's and 80's.  They're oddball issues that are chock-full of stars.  This particular set was issued in both pack and set format.  Tony threw in a bunch of Athletics from these sets, but I handpicked Campy because he's a part of "weird" baseball trivia.

On September 8th, 1965... he became the first player in MLB history to play every position in a single game.  Since then three other players have accomplished the same feat. 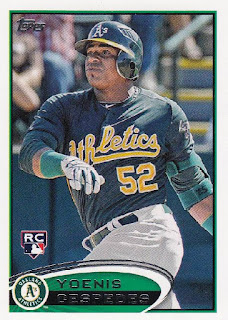 It seems like every generation of card collectors since the 70's have had their own Mini Mania.  There's obviously the King of the Mini's:  1975 Topps.  In the 80's, Fleer produced miniature sets from 1986 to 1988.  Topps rejoined the party in the 90's with their line of micro sets.

Recently Topps has been issuing a variety of minis as both insert sets and parallels.  This particular Cespedes stood out among the other minis, because he's been making headlines lately with the "interesting" ways he's been commuting to work. 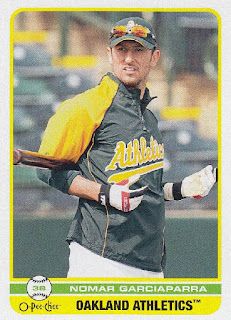 This No-mah isn't an oddball.  But seeing Garciaparra wearing anything outside of a Red Sox jersey is weird to me.

Thank you Tony for this awesome package of Oakland Athletics oddballs and base cards.  For those of you who aren't familiar with him... he is the author of Off Hiatus Baseball... a card blog that features guys like Robin Yount, Paul Molitor, and other Milwaukee Brewers.  But just like Kekich and Peterson will always remind me of my two high school buddies... I'll always associate Tony with being the King of the Oddballs.