C'mon... Give These a Chance

When I was a kid, one of my cousins tried to teach me to play chess.  I was so confused by which pieces moved in which direction that I quit without really giving the game a chance.  I had multiple opportunities to learn after that, but I always declined because that one day left a sour taste in my mouth.

Twenty-plus years later, one of my students offered to teach me and I almost said "no thanks".  But then I thought about how I'm always teaching him new things... the least I could do is let him return the favor.  In the end, I learned how to play chess and he had another person to play chess with.

Today's post isn't about chess.  But it's not about baseball cards either.

This morning I opened a very generous package from Ryan over at Japanese Sumo Wrestling Cards and Menko.

It included some of the coolest trading cards I've laid eyes on.  Sadly... I know very little about them... let alone the sport itself.  Now the eight year old Fuji might have thrown these cards to the side.  However... thankfully I've matured enough to appreciate things that I don't fully understand.

Now I'm sure some of the people who read my blog didn't bother clicking on this post, because it doesn't feature a baseball player.  And others are considering closing it right now, because they realize most of the cards Ryan sent are written in Japanese.  But I hope that at least a few of you will sit back and give these out of the ordinary trading cards a chance.  Who knows... you might just like what you see. 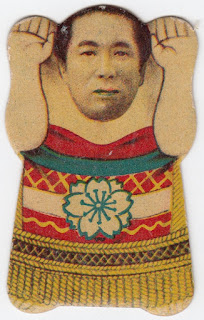 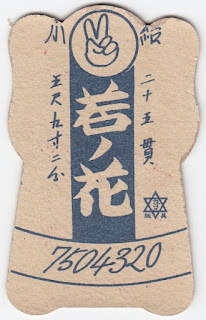 This is the type of card that caught my attention on Ryan's blog.  You don't need to be a fan of sumo wrestling to appreciate this vintage, die-cut, floating head piece of cardboard.  According to his blog, this card is from the 50's and "is comparable to the 1952 Topps set in terms of rarity, physical size, and star power."

Next up are four M-Series Menkos...

These are similar in size to a tobacco card and according to Ryan is "the most significant set printed during this time."  In January 1953, Kagamisato reached the yokozuna rank, which is the highest ranking in the sport. 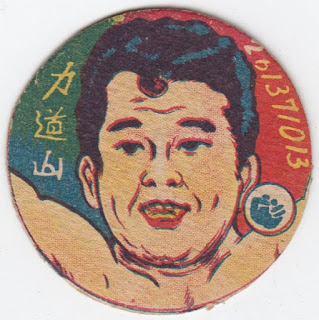 Rikidozan was a popular Japanese professional wrestler who according to Wikipedia was "one of the most influential men in wrestling history."  Sadly he was murdered when he was only thirty-nine years old.

Here are a few more Menko discs from the 50's: 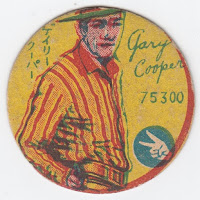 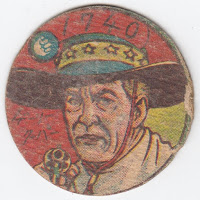 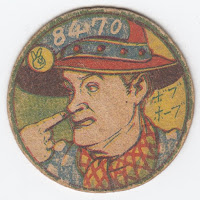 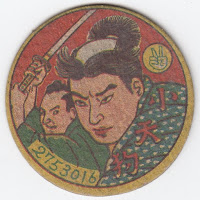 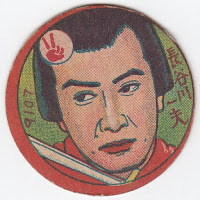 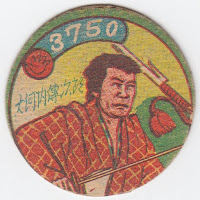 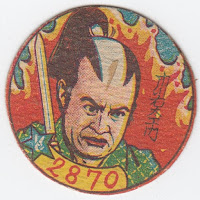 I couldn't find anything on these or the cowboys series, but they're about the same size as a U.S. Silver Dollar.

Getting back to sumo wrestling cards, Ryan also included a pair of 2010 BBM cards:

Like Kagamisato, both of these guys have reached the rank of yokozuna.

The last of the vintage is definitely the coolest (which is saying a lot... since everything he sent was really cool): 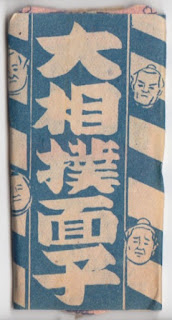 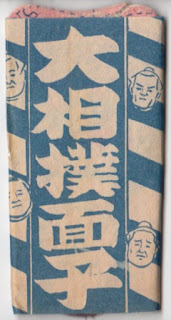 How often do you get the opportunity to see... let alone own sixty-five year old unopened packs?  I have no idea what the cards look like... but the wrappers are super awesome.  I debated on keeping one of these sealed and busting the other one just to say I did... but when push came to shove... I just couldn't do it.  Maybe one day.  But for now... these are going to be added to my unopened Japanese pack collection.

Are you still here?  If so... thank you for keeping an open mind and taking a few minutes out of your very busy schedules to check out some awesome sumo trading cards.

If you want to see or learn more about them, please head over to Ryan's blog:  Japanese Sumo Wrestling Cards and Menko.  He doesn't only focus on sumo trading cards.  Ryan also collects airport trading cards:

He wrote about this set earlier in the month on his blog.  If you travel a lot, then this might be the set for you.  Click here if you're interested in reading more about this unique set.

Well that's it for today.  Thank you Ryan for this awesome vintage Japanese trading card care package!  I'll be sending some more Laird cards for your PC in the near future.

Happy Monday and sayonara!
Posted by Fuji at 3:15 PM