This morning I woke up, opened my laptop, and started catching up on everyone's blog posts.  Two or three blogs in... I read the tragic news of Chris Cornell's death on Cardboard Jones' blog: Collating Cards.

Like millions of other people across the country, I jumped on the bandwagon and filled my CD collection with Seattle Sound bands like Pearl Jam, Nirvana, and Cornell's Sound Garden.  And just like sports cards play a big role on my personal timeline... so does music.

The "Grunge" Era was during the heart of my college years which means there are many great memories tied to it.  Hearing about Cornell instantly saddened me. 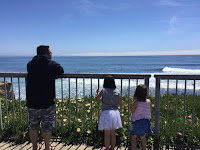 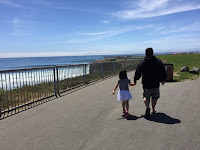 I think part of it has to do with things going on in my personal life.  In a few weeks, my 8th graders will be graduating and moving on to high school.  Plus... one of my closest friends will be moving to Oregon with her family... which means I won't get to see my two nieces on a weekly basis anymore.

Anyways... one of the best ways to get myself out of a funk is to dive into my favorite hobby.  And wouldn't you know it... I had a generous care package sent by Kin over at Bean's Ballcard Blog and I Feel Like A Collector Again that has been sitting on my desk for almost two weeks waiting to be opened. 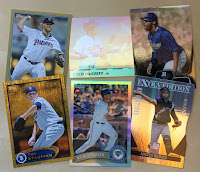 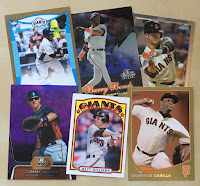 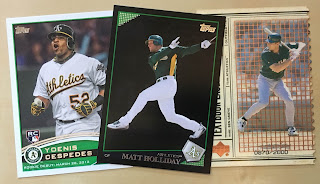 Inside he sent me a nice selection of Oakland Athletics and San Diego Padres for my collection, along with some San Francisco Giants for my students.

The card that immediately stood out was this beautiful black parallel of Matt Holliday:

Seriously... these parallels were made for the Oakland Athletics and I couldn't wait to scan this card, then add it to my A's insert binder.

And within a fifteen to twenty second period, I remembered the Holliday trades.  The one where the Athletics gave up Carlos Gonzalez to acquire him from the Colorado Rockies.  And the other trade where they shipped him off to St. Louis (where he'd go on and win a World Series title in 2011) for practically nothing.

No worries.  Kin sent me plenty of other awesome cards to cheer me up... like this Yoenis Cespedes rookie card:

Wait.  This card reminds me of the epic collapse that many A's fans believe occurred after the trade that sent Cespedes to Boston for Jon Lester.  Lester wasn't terrible for the A's, but he didn't help them get to the Promised Land either.  What's worse is he left them at the end of the season where he'd sign with the Chicago Cubs and win a World Series.

Maybe I'll move on to the Padres cards he sent me.  Here's a shiny card of The Crime Dog:

Now that's what I'm talking about.  I miss the days of Upper Deck and their holograms.  And McGriff was a beast for the Padres for a few seasons.  I wonder why he didn't stick around longer.  Oh that's right.  The Padres traded him to the Atlanta Braves for three guys many fans have never heard of.  And guess what... he went on to win a World Series title with the Braves in 1995.

Let's move along to this shiny refractor of Ryan Ludwick:

Few things can brighten this collector's day more than some refractor shine.  The good news is I don't remember when or how the Padres acquired Ludwick or what they may have gotten in return for him when he left.

Maybe we received a top pick in the draft for him?  Let's find out on Baseball Reference.

Nope.  Not a top pick.  Just cash money.  It gets worse.  Ludwick was part of that three team trade where the Padres sent Corey Kluber to the Cleveland Indians.

At least Kluber hasn't won a World Series title yet.

In all seriousness... I kinda chuckled at all of these terrible trades my beloved Oakland Athletics and San Diego Padres have made over the years.  And on this somber Saturday, I'll honestly take whatever I can get.

Thank you very much for these awesome cards Kin.  My students will appreciate the Giants you sent their way... although there's a chance the Barry will stay with me.  It's just too cool of a card.

Happy Saturday and sayonara!
Posted by Fuji at 6:30 PM