Who Ya Gonna Call?

Buh-bye Spring Break!  I'm going to miss you.  Thankfully... we'll always have the memories we built together over the past ten days.

One of which involves meeting and shaking the hands of famous Blues Brother... Mr. Dan Aykroyd: 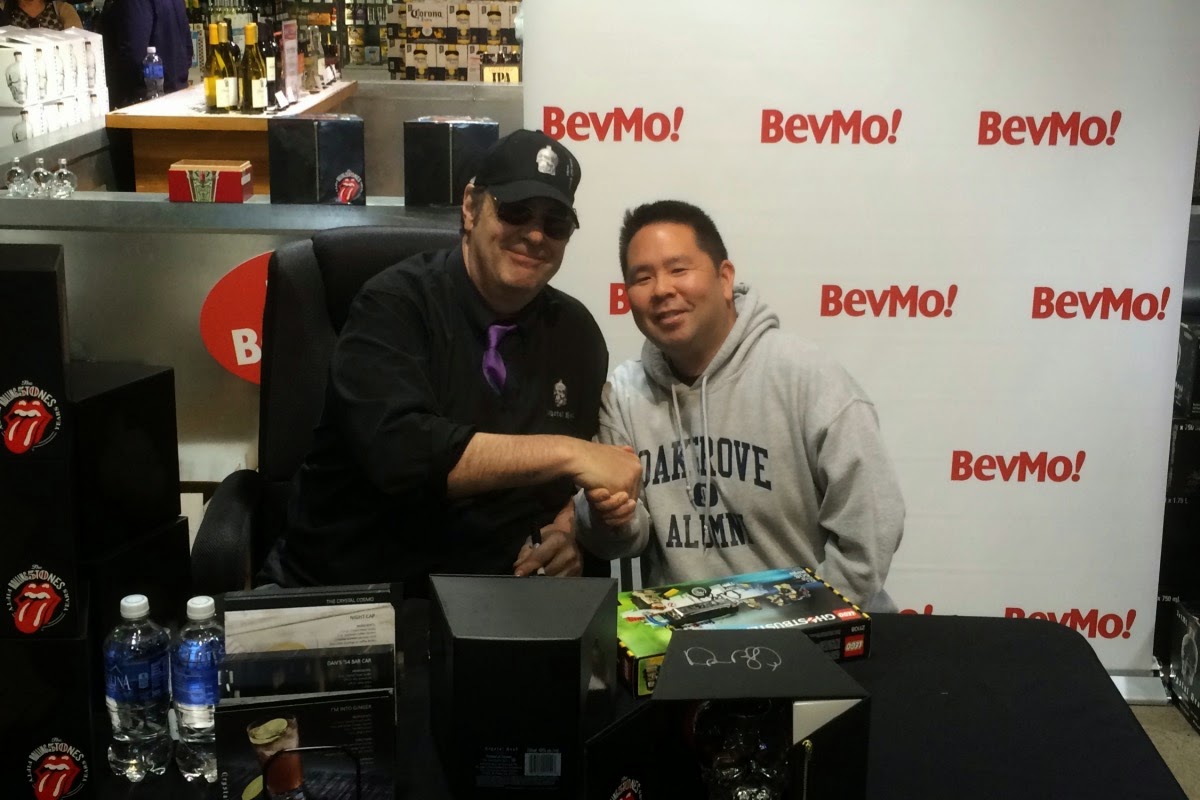 Last Thursday, Mr. Aykroyd was promoting his Crystal Head Vodka at a local BevMo!.  He arrived at 2:00pm and line was at least two to three hundred people long.  Luckily my buddy and I arrived early enough to avoid the long line.  Normally... I wouldn't have been able to make it down there until at least 3 o'clock, which happened to be around the time I finally met Elwood J. Blues.

When I left... the line had probably doubled.  I can't say for sure, because I couldn't see the end of the line.  But when my buddy and I drove by two hours later, there was still a huge line outside.

Since everyone was standing in line, I was finally able to get a clear shot of The Bluesmobile: 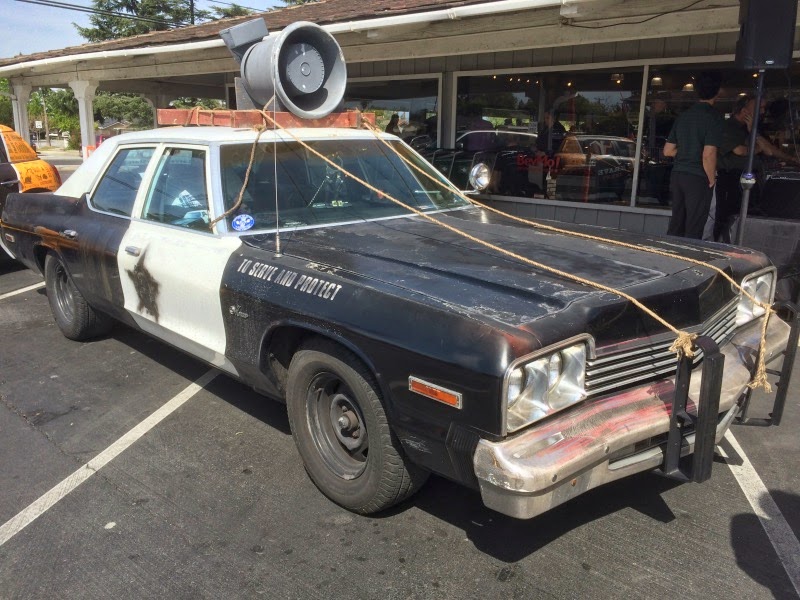 In addition to the photo and the handshake, I also walked away with some autographs:

It's hard to see, but I had him sign a cheap harmonica I picked up earlier in the day for $7. 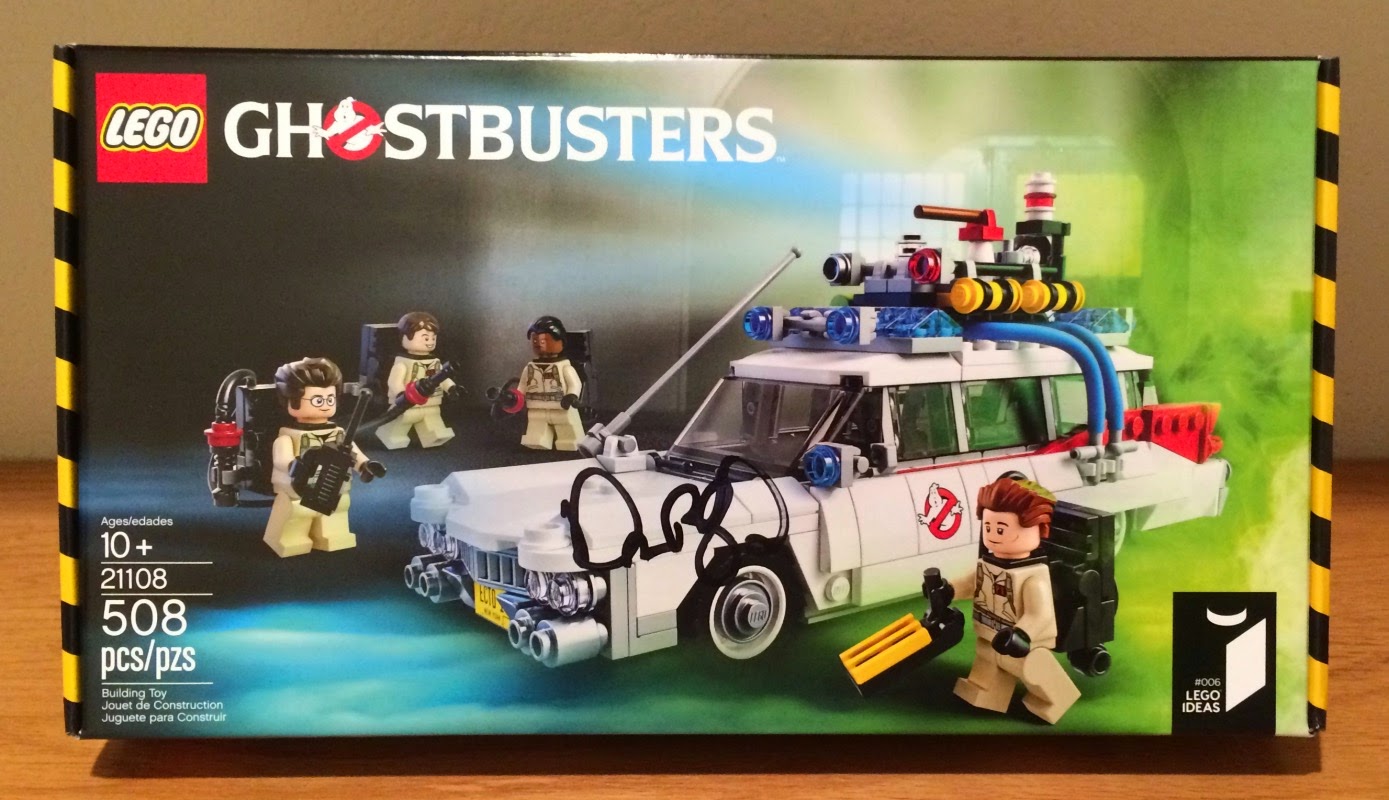 He also signed my Lego Ecto-1 box.  Ghostbusters is my favorite Dan Aykroyd film with Spies Like Us a very close second.  So it was a no-brainer to have him sign my Lego set.

In order to get two autographs, you had to purchase or pre-purchase a bottle of his vodka, which comes in a very cool skull bottle.  My buddy found some of the smaller bottles at another BevMo store and gave me one:

Unfortunately... the bottle is pretty tiny, so Mr. Aykroyd was only able to initial it:

Overall it was a really cool experience to be able to shake hands with a guy I grew up watching on Saturday Night Live and in movie theaters.  And to think... all of this was possible because I had the day off.

Are you a fan of Dan Aykroyd?  Do you have a favorite Aykroyd film?

I look forward to reading your responses.  If I were to make a prediction... based on the people I talked to last Thursday... The Blues Brothers will probably receive the most votes.

Have a great week!  Happy Monday and sayonara!

I almost forgot to include this: 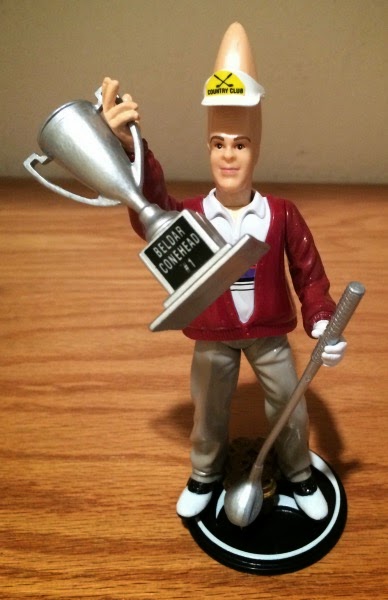 When I found out about the autograph signing, I went over to Amazon and picked up this: 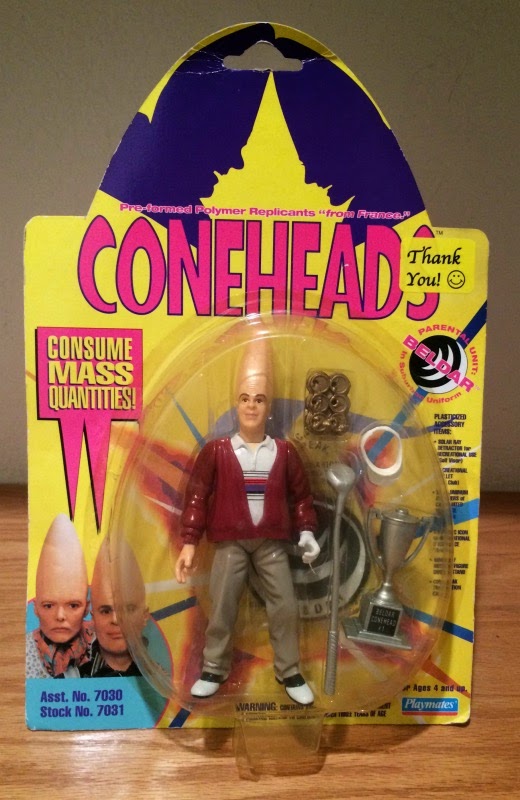 Unfortunately the bubble was cracked and had some discoloration, so I wasn't able to get this signed  On a positive note, the seller gave me a full refund and told me to keep the figure for my troubles.  If any of you are looking for toys, you might want to check out his Amazon store:

It's nice to know customer service is still important among a lot of vendors in our world.
Posted by Fuji at 3:00 PM

I have to admit that my favorite Dan Aykroyd film is actually Grosse Pointe Blank. Blues Brothers is excellent -- don't get me wrong -- but for some reason I just like GPB.

Blues Brothers just may be my favorite movie ever. It doesn't get much better than that !

I think my all time favorite Aykroyd scene is from Canadian Bacon when John Candy gets pulled over by Dan Aykroyd in Canada, and John's truck has all sorts of rude comments about Canada all over it and Dan tells him they have language laws in Canada and makes him write all the slurs in French as well. Sadly that's also the best part of Canadian Bacon.

"New Oldsmobiles are in early this year!"

Blues Brothers is definitely among my favorite movies of all time, but I'm a huge Aykroyd fan in general. Kate and I watched My Girl on our first date, so that one gets an honorable mention for me as well. Awesome signing, and some very nice choices for what you got signed.

That's awesome!!!! I am jealous you have his auto and met the legend. He is up there with Chevy and Bill Murray to me. He has so many great movies I don't think i can choose just one. I have seen Ghostbusters a million times however.

You spent the afternoon with "Fred Garvin, Male Prostitute"!!! Too frickin cool!!
Favorite Akroyd has got to be The Great Outdoors!!

"You wouldn't know a good time if it fell out of the sky and landed on your face and started to wiggle!"

and the raccoons were hilarious!

Definitely Blues Brothers, but I really like the way he carrried himself in Driving Miss Daisy.

Damn! I'm not far from the South Bay too! without question, without hesitation, it would be the Blues Brothers

Elwood: It's 106 miles to Chicago, we got a full tank of gas, half a pack of cigarettes, it's dark... and we're wearing sunglasses.

Coneheads was my favorite when I was a kid!

I am a big fan of Dan Aykroyd, that is so cool that he signed a number of items for you. In no specific order some of my favorite Aykroyd movies: Blue Brothers, Spies Like Us, Trading Places (Probably my favorite), Ghostbusters and Nothing But Trouble.

Well, Blues Brothers is my favorite movie of all time - as a native to the area, its almost mandatory. But, I probably watched Ghostbusters daily as a kid too.

Think I like Trading Places best of all. None of them top the classics though: Super-Bass-O-Matic ("just look at that shine!") and Crazy Eddie's sale prices....

Mark, that's awesome! Love a lot of the movies that he's appeared in, and that had to have been an incredible experience meeting a great comedian such as Ackroyd. Easily my favorite film of his would be Ghostbusters...

Did he offer you a shot? At least a taste? Dragnet or ghostbusters-I can't choose

Wow- what a way to spend Spring Break!
Hands down, his best movie: The Blues Brothers. I also liked Neighbors and 1941. (I see a pattern here)

He's an amazing talent. I love several Aykroyd films and it would be hard for me to choose between GB, Trading Places, Driving Miss Daisy and Blues Brothers. I look at him as the acting version of Willie Nelson...by that I mean he has great skills and even more than that he always brings out the best in those around him.

Very cool. Been watching SNL since day one. The Bassomatic was classis. Will always love the Blues Brothers. One of my favorite movies of all time

Very cool. I'm going to have to go with Ghostbusters, but there are so many films he's been in that I love. You've got Ghostbusters, Blues Brothers, Spies Like Us, Dragnet (Aykroyd and Hanks, dream pairing), Great Outdoors, Trading Places, Grosse Pointe Blank, Celtic Pride (which I was an extra in), and more.

Was he selling Bag O' Glass along with the vodka?