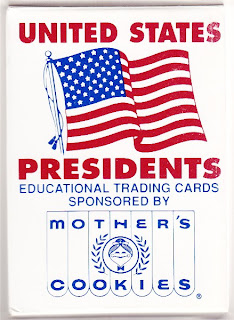 The third Monday of every February is known as Presidents' Day in honor of George Washington's birthday.

It also means that I usually get a week off from work, so I figured I'd show my appreciation by showcasing my 1992 Mother's Cookies U.S. Presidents set. 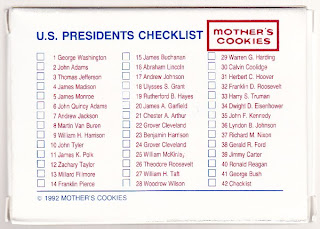 Each of the first forty-one Presidents have their own card, plus there's a checklist card.  I've seen these cards individually wrapped in cellophane packages, which I assume were placed into bags of Mother's Cookies.  However my set came in a specially marked box.  If anyone remembers how these were distributed, please feel free to comment below. 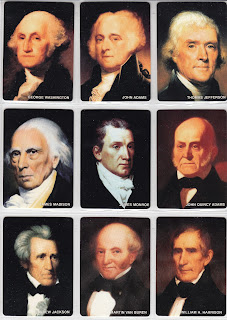 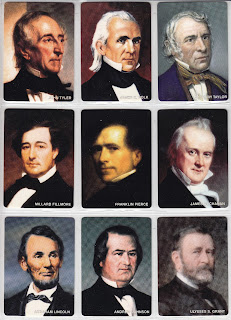 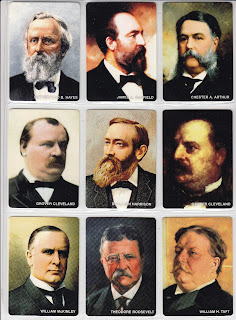 The card backs have key information on the President, such as their political party and significant events during their presidency. 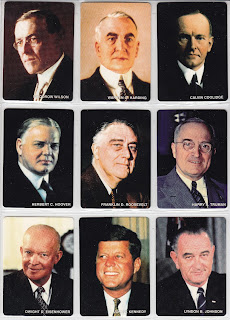 You can find these every now and then on eBay in the $5 to $10 range.  I'm pretty sure that's about how much I spent on my set. 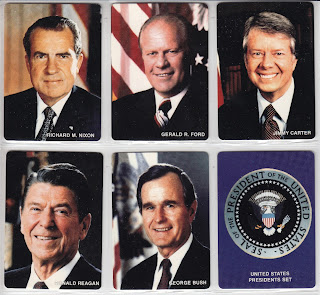 Overall, if you're a fan of oddballs, Americana, or non-sports issues.... then this set is for you.

Happy Presidents' Day and sayonara!
Posted by Fuji at 9:00 AM

timely post! this is the first time i've had today off since high school, thank you presidents of the united states!

One thing I liked about Buss he let basketball men run the Lakers. He realized like he said they knew way more about it. I think Jeanie could do better than Jim Buss at basketball decisions.

It's the least I could do. I look forward to this week off every year!

I need your address again Fuji...you won my little contest for a 2013 Topps rack pack! Also, I pulled a Yoenis Cespedes manupatch from a blaster if you want it!

Wow, What an Outstanding post. I found this too much informatics. It is what I was seeking for. I would like to recommend you that please keep sharing such type of info.If possible, Thanks. Presidents Cup 2019

This is a smart blog. I mean it. You have so much knowledge about this issue, and so much passion. You also know how to make people rally behind it, obviously from the responses.
Presidents Cup Golf 2019 Live Stream

Presidents Cup 2019 is the upcoming most exciting event. If you are a golf lover and unable to attend the tournament in person, then the best thing you can do is to watch President Cup Online.

The 2020 Super Bowl will be aired live on Fox with Joe Buck on lead commentary duty for the sixth time in the showpiece game.


Australian Open Tennis 2020, the first grand slam Tennis Tournament of the year. Australian Open is set to kick off from 20 January at Melbourne Park.

Check out the best ways to watch Wilder vs Fury 2 live stream online. Wilder-Fury will happen with an unprecedented joining of forces as ESPN and FOX Sports will co-produce the pay-per-view.

There aren’t too many options to live stream Genesis Inviational 2020. But in case you are not able to get to a TV to catch the games live, you can watch the games online through live streaming.

You can watch Indy 500 Live in the different online TV like YouTube TV, Hulu TV, ESPN, Sling TV, Fubo, Xumo, PlayStation Vue, CBS sports and Fox sports. Let’s see about these channels and how to watch by using these channels.

Masters organizers also provide the live streaming service for the viewers in the US. If you are living in the US, you are fortunate. All you need to do is to visit Masters.com to watch the Masters Live Stream right through your browser.

Masters 2020 Live is one of the four biggest national golf competition that takes place in the country. This is also the first of such big competition and it always takes place around April of every year.

For those who don’t mind losing their sleep to capture all the action on the UFC 249 Live, BT Sport also broadcasts other matches in real-time through the BT Sport app and website.

WrestleMania 36 Live Stream free is an awesome thanks to enjoying the event. You ought to initially ensure the online connection and also an ideal gadget.

There are two ways to watch PGA Championship 2020 live in your home. One way is through cable TV. Another way is online streaming services. Let’s check out the detailed guideline to watch.

There are two ways to watch PGA Championship 2020 live in your home. One way is through cable TV. Another way is online streaming services. Let’s check out the detailed guideline to watch.