Fifty-four years ago on January 18th, 1958... Willie O'Ree etched his name in hockey history when he broke the color barrier and became the first black player in NHL history.
I've always been fascinated by sports history... and remember the first time I was introduced to O'Ree. Back in the day, I was at my local card shop busting a box of 1997-98 Pinnacle Beehive, when I pulled this: 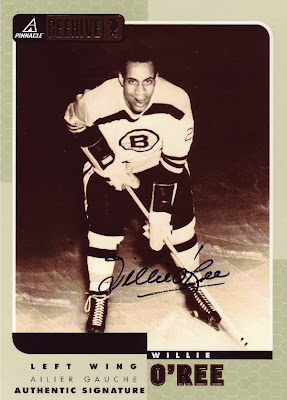 Hockey cards had been a part of my collecting addiction for several years... but I had never heard of this O'Ree fella. But, I figured I had something special... because the sepia toned photo hinted towards him being an older player. That's when my buddy who worked at the shop told me he was known as the Jackie Robinson of hockey.
It still surprises me to know that you can pick up certified autographed cards of O'Ree for under five dollars... including this Beehive card... which is an autographed version of his rookie card.
If you're not familiar with this product, they are larger than regular issue cards... and didn't seem to be very popular among the collectors I knew. And like most products from the mid 90's... Pinnacle Beehive eventually showed up at online stores for $10 to $15/box. I decided to bust a ton of this product and eventually built the complete twenty-five card autographed set that includes early autographs of Roberto Luongo & Joe Thornton, along with NHL legends like: Stan Mikita & Maurice "The Rocket" Richard.
The next time I'm down at my parents, I'll try to remember to dig this set up and do a write-up on it. The over-sized cards and on-card autographs truly makes this one of my favorite sets in my collection.
Today's question of the day...
What are some of your favorite autographed sets?
Happy Hump Day! Enjoy the rest of your week... and sayonara!
Posted by Fuji at 4:56 PM

Allen & Ginter and Masterpieces, far and away above all others.

greg - huge fan of the on-card strokes of genius autographs

chris - wow... those are some sweet signatures. when it comes to older basketball autographs, i really liked the 99/00 retro inkredible cards too.