PC Addition - One of a Kind Bruce Lee Painting 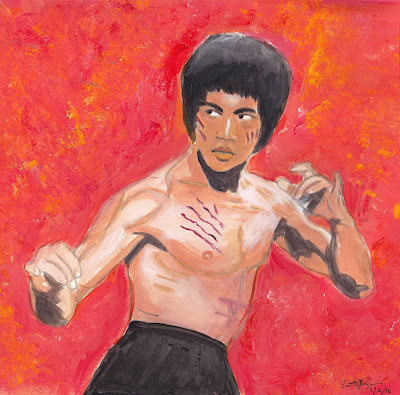 My birthday was in September... but on Tuesday, I went back into the classroom and received the above painting as a belated birthday present from one of my students.
It's a one of a kind acrylic/water color painting of Mr. Bruce Lee. Pretty awesome, right? I won't disclose her identity, but she's a seventh grade student who has been drawing since she was three years old and currently sells these works of art for $5 each. Ironically, I discovered her talent back in August, when I caught her drawing in my class. She showed me her portfolio and I was blown away by her paintings and sketches of: Michael Jackson, 2-Pac, and Fred Astaire.
I asked her if she'd sell me one, but she insisted on painting a custom piece for my birthday... all I had to do was decide on which subject I wanted. It took a few months, but I finally decided on Bruce Lee, who has been a personal icon of pure "awesomeness" since I first watched his movies as a kid.
Here's the image she based the painting on: 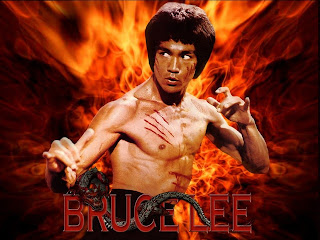 It's from his 1973 classic and one of my favorite films, Enter The Dragon. Sadly, Lee passed away at the age of thirty-two on July 20th, 1973... just six days prior to the release of this film in Hong Kong. Thankfully, his legacy will live on forever in his films, dojos, and of course peoples' memories.
Here is today's question of the day:
What's your favorite movie?
And if you're really cool, you can be more specific and tell everyone your favorite movie featuring "martial arts".
I hope all of you had a great week... I can't believe tomorrow is already Friday. Stay positive & sayonara!
Oh... and I almost forgot... a few years ago, a friend of mine donated her bearded dragon to my class. In honor of Mr. Lee, I named him "Bruce". 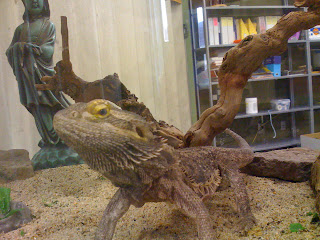 Bruce was my classroom pet for four years. Unfortunately, I don't own him anymore. My new principal wouldn't let me bring him with me to the middle school level, so I found a nice home for him with a student's family.
Posted by Fuji at 4:13 PM

She has some talent. That is really cool looking. Does she have a website of her other paintings?

And I'd say...hmmm...a few. Harold and Maude and Eternal Sunshine of the Spotless Mind. Both awesome.

As far as martial arts...there's a really goofy one where they surgically attach a large black man and a grumpy old racist together into one body. That one rules. Can't remember the name but it's nuts.

No Martial Arts, Chasing Amy is one of my fave movies!

Slapshot---hockey and if you stretch it a bit, there is some form of martial arts in it somewhere

Very cool gift! My favorite movie of all-time is The Perfect Storm. And for martial arts movies, I will go 80's and say the original Karate Kid!

spiegel83 - hmmm...i'm not sure if she has her own store, but if she doesn't she should open an etsy shop.

spastikmooss - i've never seen harold and maude, i'll have to check to see if it's on netflix... as for eternal sunshine of the spotless mind... i just didn't get it.

i've never heard of your third movie, but it sure sounds good.

kazi - definitely a classic... one of these days i'll do a sports movie post and slapshot will surely be on the list

chris p - neither of my parents are very artistic, but my sister is a graphic designer who has always been creative. on the other hand... i don't have a creative bone in my body.

30 year old cardboard - love the perfect storm... definitely sad, but a great movie indeed. oh... and i'm a huge karate kid fan. i was in love with the japanese girl from the 2nd flick for years ;-)

That girl is talented. $5 will be a bargain basement price if she keeps it up. My mom sells on Etsy, I never heard of it before her. There are so many good movies and yet here I sit, unable to think of one off the top of my head.

I may have to commission some art through you!

Kevin Smith films are awesome. I don't get to watch them often enough! That said, my favorite movie is Almost Famous.

play at the plate - i already told her that $5 is a steal and she said she was thinking about raising her prices. i think she charges only $5, because that's what most of her peers can afford.

ryan g - almost famous is awesome! it's one of those films i always forget to add to my "favorites" list, but it's a classic nonetheless.

spankee - thanks for the recommendations... i think i saw bloodsport years ago, but i forgot what it was about. never watched the last dragon, but i'll look for it on netflix.

My favorite overall movie, I'm not even sure why, is The Last Starfighter. Possibly because it was the first non-Disney movie I saw in the theater.

It's hard to pick a favorite martial arts movie, but it would have to be one of Jackie Chan's...probably Police Story or maybe even Sammo Hung's Spooky Encounters. It's really hard to choose there being so many great ones.

jason - another blast from the past... i think i liked the last starfighter, because it involved video games... kind of why i liked "gotcha" too. i've never heard of the other two movies, but after i'm done with harold & maude and the last dragon, i'll try to remember to look into them.

So tough to pick a favorite. I'm still on a Cameron Crowe high after seeing We Bought A Zoo so I'll also have to go with Almost Famous. Close runner-ups would be Big, Clerks and any of the Toy Story movies.

offy - i can't wait until we bought a zoo is out on dvd... heard it's pretty good. it's funny that you mentioned big... i picked that movie up a few months back, but haven't opened it yet. maybe i'll watch it this weekend.

Zoo is still out in the theaters so it'll be a while until it is out on DVD and probably even longer until they put out a version that's more than one DVD and actually worth owning. For example, the release of Almost Famous with the director's cut, Untitled, is the only version of that worth owning. The directors cut is awesome. Depending on how Sunday goes, we really want to head back to the theater so that our daughter can see Zoo.

Have you seen Big previously? It feels like I've been a Tom Hanks fan all of my life. I was a big fan of Bosom Buddies, but no one knew who Tom Hanks was back then. Big was the movie that made me realize that awards such as the Oscar are a joke. That movie not getting any awards that year was a travesty. I'm much happier these days not caring what movies, music and TV shows that other people think are the best.

yeah... i think it's still in theaters around me too. but i don't usually go, unless it's something i really need to see on the big screen.

i've seen big a few times... it's a great movie. also a huge fan of bosom buddies... that blonde girl was hot!

That drawing is amazing,I wonder if she would accept a commission from the UK for a Chow Yun Fat picture? Fav movies.

Awesome artwork! Let me get a commission before the prices go through the roof too! :D

A lot of my favorite movies involve martial arts. I'm not a thinking man's intelligent person much of the time, I likey the action. Off the top of my head, Shanghai Noon, Wasabi, and The Returner are way up the all-time favorites list.

hairy lemon - i'm sure she'd draw you mr. fat... but she has so many requests (by her peers), that the waiting list is a mile long. reason #139 for her to raise her prices.

headed to go watch ichi the killer again, as soon as i'm finished with lonestarr's comment. love that movie.

lonestarr - there's a movie called wasabi? i've got to see that. maybe i'll watch that after ichi... if i can fit it into my busy sunday schedule.