Student of the Game

Not sure about you, but I'm constantly being reminded about my age.  No... I'm not surrounded by annoying people saying "you're old".  It's life events that make me reflect on my life and look back on all of the years that have passed.
Last weekend, my niece graduated from Texas Christian University with summa cum laude honors.  The entire family is so proud of her, because she's worked so hard the past seventeen years.  And even though I'm more than twice her age, she's my role model and someone I look up to.
A few weeks earlier, my nephew announced that he'll be attending UC Berkeley.  As many of you know... I actively root for all of the Bay Area colleges.  Up until now, we've only had family members graduate from San Jose State and Santa Clara University.  I'm looking forward to seeing my nephew add Berkeley to that list.
Congratulations Lauren and Kobe!  I'm so proud of both of you!  I wish both of you the best as you both begin the next chapter in this story we call Life.
In honor of my niece and nephew, I figured I'd show off a pair of Gwynns I recently added to my collection:

1992 Topps Micro Gold #270
1993 Topps Micro #5
Tony Gwynn was known for being a student of the game.
When I thought about writing a post for my niece and nephew, I knew I wanted to include a baseball player who was known for being someone who worked hard and always looked for new ways to improve his game.  Tony Gwynn was obviously the first person who popped into my head.
It has been well documented that he would record his own at-bats and study the footage... as well as watch tape of opposing pictures well before it became the standard.
By the way... if these two images seem grainy, it's because they are much, much smaller than your standard sized card.  See for yourself.  Here's side by side comparison: 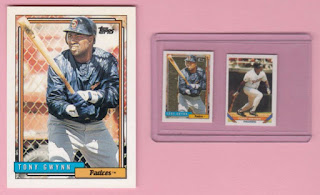 For those of you who aren't familiar with these Topps Micro cards, they were released as complete sets back in 1991, 1992, and 1993.  At the time... I was still in college and under the legal drinking age.
Both of these Micros were sent to me by reader of the blog:  Xavier.  In addition to these two Gwynns, he sent me a huge box filled with a variety of cards.
As many of you know, I not the biggest fan of scanning... so I will need to break up his care package into more manageable posts.
Let's continue with some cool additions to my Prime Number PC: 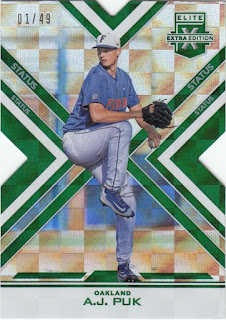 2016 Panini Elite Extra Edition Status Emerald #6 (#'d 01/49)
Just as Lauren was the first of my nieces and nephews to graduate from college, this card was the first card serial numbered in the run.  A's fan are both excited and worried about A.J. Puk.  He's been a top prospect for the Athletics since 2016, but the past few years he's been plagued by injuries.

2019 Topps Pro Debut #68 (#'d 01/99)
On the other hand, Ramos has been hitting well on the other side of the country for the Richmond Flying Squirrels.  He's currently the San Francisco Giants #3 prospect and I remember him playing for the San Jose Giants back in 2019.  It'll be interesting to see how his career pans out.
By the way... a quick look at Ramos reveals that he was born in September of 1999.  At that point I was already starting my second year of teaching. 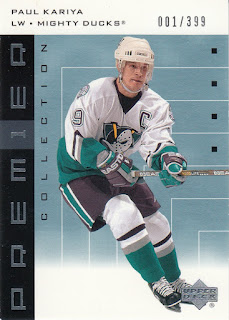 2002-03 UD Premier Collection #1 (#'d 001/399)
Paul Kariya wrapped up his NHL career in 2010.  It's hard to believe that was over a decade ago.  At the time I was in my 30's and feeling like I was in my prime.  Kariya might have been past his prime back then, but he managed to retire as a multi-millionaire at the youthful age of 35.
I'll be happy if I can retire in twelve years... but unless I win the lottery or the hobby continues to soar through the roof... I don't ever anticipate being a millionaire.

2020 Donruss Optic Teal Velocity #34 (#'d 35/35)
The last of the Prime #'s I received from Xavier is the Jesus Luzardo which was the last card printed in this serial numbered run.  Luzardo was also featured a few days ago on the blog, because of his "video game" injury.
And rounding out today's post are the Kobe Bryant cards that were part of Xavier's care package: 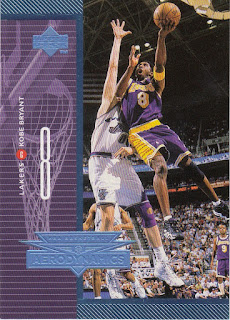 1998-99 Upper Deck AeroDynamics #A14
This card was released during my first year of teaching.  It's hard to believe that in less than a month, I'll be wrapping up my 23rd year in my district.  Damn.  I feel old.
Anyways... like Kariya... Bryant will be a hall of famer by the time you most of you read this post. 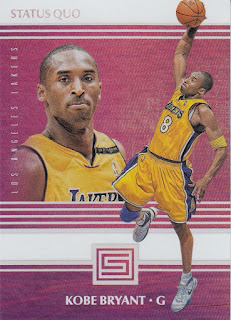 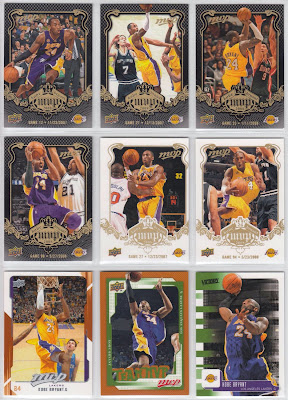 And like my nephew... Bryant has a cool first name.
Mr. Bryant... congratulations to you, your family, and your fans!  And thank you for providing so many great memories during an age when I was still a fan of basketball.  Your dedication to the sport was truly worthy of admiration and your legacy will live on.
Sky's the Limit by Biggie Smalls
Congratulations to my niece and nephew on entering new phases of your life.  Like I tell each of my graduating students... work hard, make good choices, be kind to others, and learn from your mistakes.  The force is strong with both of you and the sky's the limit.  I love you guys!
And thank you Xavier for this very generous care package.  I've only touched the tip of the iceberg.  You along with John (Johnny's Trading Spot), Greg (The Collective Mind), and Reader James have given me several more posts worth of blog content... which is much appreciated.
It's been awhile... but here's a question of the day for you to ponder:
What athletes come to mind when you hear the term "student of the game"?
Happy Saturday and sayonara!
Posted by Fuji at 1:30 PM