Lunch Time Treats and Cool Cardboard Collectibles from the 70's

Memories are precious.  Sadly... mine just isn't what it used to be.  The good news is that certain ones stand out like a painting in my mind.
The late 70's were the primary years of elementary school for me... and one of the most vibrant memories is getting excited about hanging out with my friends at lunch.  We'd sit down either in the cafeteria or out on the blacktop, open our lunches, and check out what our moms packed.
Every now and then, I'd talk my mom into buying me a box of Zingers or Ding Dongs and she'd toss one into my Star Wars lunch pail.  The details on this part of the story are a little fuzzy... but I feel like it happened a few times a month.
Another fuzzy memory are the trading cards found on Hostess boxes from 1975 to 1979.  I'm pretty sure I remember seeing them when I was a kid.  But  since I didn't really start collecting baseball cards until 1981... if I did cut them out... I didn't bother saving any from my childhood.
These days... they're highly treasured oddballs in my collection.
And in honor of today being National Brown-Bag-It Day, I figured I'd get off my butt and write a post about my five favorite Hostess cards in my collection.  However before I share my list... here's a quick year by year look at the Hostess baseball card designs of the 70's:

1975 Hostess #43
With the exception of the 1976 design, the other four years sort of blend together in my mind.  White borders with red and blue text.

1976 Hostess #19
The 1976 design is hands down my favorite, because the red, white, and blue stripes stand out and separate themselves from any of the other designs.

1977 Hostess #2
The 1977 design uses a non-rectangular photograph which makes it a little more distinguishable from the other designs.

1979 Hostess #13
In 1979, Hostess decided to try something new and put the information at the top.  As for the backs, there are slight differences between each of the five releases... but looks pretty much the same to me.
Honestly before writing this post, 1976 was the only design I would have been able to point out in a lineup.  I'm pretty sure that I'll be able to recognize 1977 Hostess cards from this point moving forward.
Okay... let's move along to my five favorite 70's Hostess collectibles from my collection...
#5:  1975 Hostess Strip #61, 62, & 63

I own five or six different strips from this set... but this one stands out the most because it features three solid and popular players from the era.  Cey looks fantastic with the posed swing.  Porter is wearing the spectacles I associate him with.  And Carlton is rocking the killer 'stache. 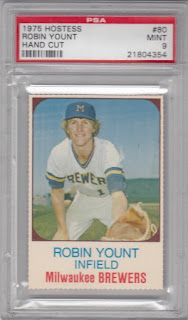 Next up is a graded rookie card of a hall of famer and by now you probably know I have a deep appreciation for rookie cards of hall of famers... and don't have any problems with slabbed cards.
#3:  1977 Hostess #46 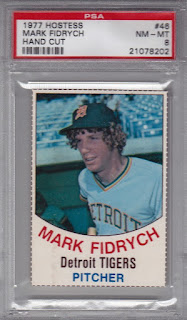 Fidrych might not be a hall of famer, but I'd take this graded card over the Yount.  The Bird is just one of those players that brings a smile to my face whenever I hear his name or stories about him.
#2:  1979 Hostess #102

I've never associated Ozzie with the Padres.  He'll always be a St. Louis Cardinal to me... but that's why I enjoy seeing cards featuring him wearing the Brown & Gold.  The fact that this is another hall of fame rookie card puts this one at the #2 spot.
Honorary Mention:  Jose Altuve Custom

As I mentioned earlier, the 1976 design is hands down my favorite Hostess design... but my favorite thing about this panel is the Reggie in the middle:

Just like the Cey above... there's just something I love about the posed swing.  Toss in the cool shades, mustache, and the Oakland Coliseum in the background... and this card is truly a work of art.
I can't imagine another Hostess card out there capable of knocking Mr. October from his throne.  But if you have any suggestions... leave them down below in the comment section and I'll check them out.
Happy National Brown-Bag-It Day and sayonara!
Posted by Fuji at 4:00 PM