This weekend there was a card show at the Santa Clara Convention Center.  I've gone a few times over the years, but a rough work week and a tight budget convinced me to stay home and get some rest.

According to a couple of people I talked to... I didn't miss much... which is both good and bad depending on your point of view.  It's good, because nobody wants to miss out on a great card show.  However... it's bad, because this card show hasn't been great in a few years. 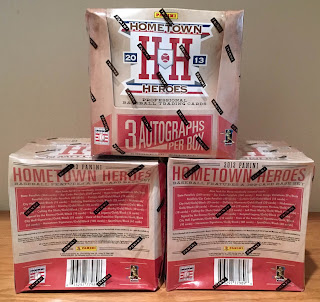 So anyways... I apologize to those who were expecting a card show recap.

Instead... how about a summary of the three boxes of 2013 Panini Hometown Heroes I picked up at GTS Distribution a few weeks ago?

While on a supply run, I discovered that the wholesaler had a "damaged/sold as is" section with a smorgasbord of stuff.  There were some supplies mixed in with a few hobby boxes.  I was pleased to find these three boxes, which were kinda smushed for only $20 each.  I figured for that price it was worth the risk.

Let's see if it paid off.

As an autograph guy, the biggest draw are the on-card autographs in this product.  Here's who I pulled:

The first pack in the first box contained this sticker autograph of Mr. Fernandez.  I was happy with the player, but disappointed about seeing the sticker.

Ahh.  There we go.  Hard signed.  Just the way I like them.  I was really happy to see the McGee, since he was a favorite of mine back in the 80's.  Plus... he doesn't really sign a lot of cards.

Panini loaded the second box with 5 autographs, so that was pretty nice.  The Darling is a nice addition to my collection since he was born in Hawaii.

The other four cards featured a pair of Gagnes...

and a gold parallel autograph of El Caballo:

Right out of the gates, I pulled another gold parallel autograph.  This time it's Bone... and it'll fit perfectly in my Prime Number PC.

Next up is another card for my personal collection...

Okay... so it doesn't feature a team logo and it's on a silly sticker... but it's The Man of Steal!  I was totally shocked to see this one come out of the pack.  This is the first time I had ever seen one of these Scripted Legacy cards before... and I believe I've busted five or six of these boxes now.

The last autograph was...

Meh.  This card would have been cool thirty years ago.  Anyone else pay way too much money for their 1985 Fleer Glenn Davis rookie card? 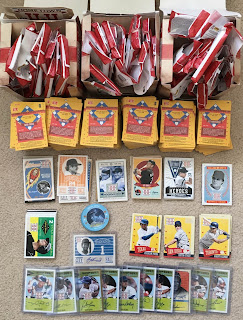 Okay... here's a breakdown of everything else I pulled:

I was able to build two base sets (w/o short prints) and come pretty close to completing a third.  Speaking of short prints, I pulled these four:

I'm pretty excited about the Pete Rose.  It's not often I get to add inserts or parallels of him to the binder.

Here are the other parallels, I pulled: 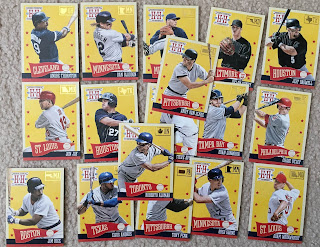 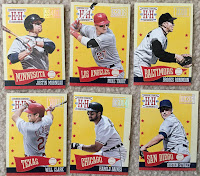 My favorite inserts are the lenticular Sport Discs: 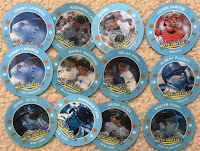 This would be a pretty fun set to build... although it might prove challenging because of the set size (60 discs).  I'll have to see how many of these I have sitting around.

And rounding out the break are the rest of the inserts... 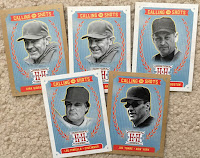 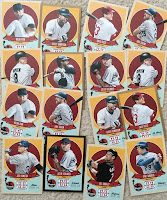 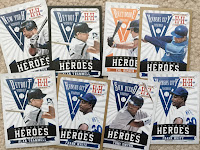 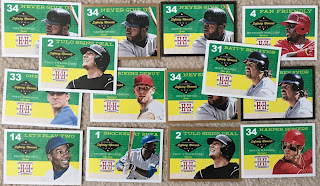 After opening up all three damaged boxes, I ended up with exactly one damaged card and it had nothing to do with the condition of the boxes.  The Huston Street Zip Code parallel was badly miscut and off-centered.  At the end of the day... I'd say that I'm very pleased with these damaged and discounted boxes.

In fact... I'm tempted to rush back down to GTS to see if there are still any boxes left.

Oh... I picked up one more damaged box that I'll save for another day... when I'm in the mood to open some basketball cards.  Until then...

Happy Sunday and sayonara!
Posted by Fuji at 4:00 PM