I never acquired the taste for beer, but I'm 100% in support of sports cards promoting a brewing company.

A few years ago, while scouring the internet for trading cards of Japanese Hall of Famer, Sadayoshi Fujimoto, I discovered this 2005 Helmar card:

Up to that point, I had never even heard of the Helmar Brewing Company and even now... I still don't know much about the company.  I'm not even 100% sure they still sell beer.  Their website seems to promote their original hand-made art cards that they sell on eBay rather than beer.

What I do know is that in 2005, Helmar released three card packs which I'm guessing were distributed to customers who bought their beer.  These cards seem to combine the popular T206 card design with the T205 gold borders, but are actually slightly larger (1 5/8" x 2 3/4") than the original tobacco cards.

It took longer than expected, but I was finally able to add the above Fujimoto to my collection for 49¢ (+ 99¢ shipping) back in August.  Fast forward to Friday, February 3rd.  That's when I opened up Julie's care package, pulled out a Jiro Noguchi from the same set, and decided I needed to track down more of these cards.

My search led me to purchasing these four unopened packs on eBay: 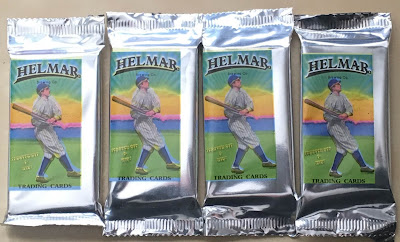 Oh man... right out of the pack these cards are thick and gorgeous.  The colorful sky on this card blows away the plain dark gray background on my Sadayoshi Fujimoto.  And the player isn't too shabby either.  Mordecai Brown was a hall of fame pitcher whose 2.06 career ERA is the lowest in MLB history among all pitchers who won 200 or more games.

Next up is Dave Malarcher who was a Negro League player who spent the bulk of his career with the Chicago American Giants.  Later in life he ran a real estate company and was also a accomplished poet.

Frank "Home Run" Baker is considered one of the greatest power hitters of the Dead-ball Era.  He led the American League in home runs four consecutive years from 1911 to 1914 and was inducted into Cooperstown in 1955.

This card is proof that it's okay to judge a book by its cover.  I have no idea who Jesse Lee Tally is, but this card is beautiful.  It took a few clicks on the internet, but I discovered that Tally played on a barnstorming team from 1915 to 1933 in Benton Harbor, Michigan and was known as The Bearded Babe Ruth.

In terms of star power, this pack was the worst out of the lot.

Jimmy Adamick was a heavyweight boxer from the 1930's who won 50 fights over a 5 year period and only lost three times.  That a pretty impressive feat.  So I gotta ask.  Why doesn't this guy have a Wikipedia page?

Another great looking card of a former heavyweight boxing champion.  Unfortunately... I had never heard of the guy before this post.  Hey boxing fans, do you remember Primo Carnera?

Rounding out this pack is another guy I've never heard of.  His 266 wins were good enough to get him elected into the Baseball Hall of Fame by the Veteran's Committee in 1963.  However his claim to fame is he has the most losses by a left-handed pitcher in MLB history.

Dennis Biddle is supposedly the youngest person to ever play in a Negro League game.  However according to this article, the Chicago American Giants went out of business in 1952, the year before Biddle claims he played.

You gotta love some baseball controversy.

On March 30th, 2002... Demetrius Jenkins won the WBO Light Heavyweight title and was on top of the world.  In fact, there's a good chance this card depicts him posing right after that fight.  This card just oozes confidence.

He'd enter the ring eleven more times in his career.  Wanna guess how many times he won?  Trust me, it's not pretty.

The final card out of the final pack is of Japanese Hall of Fame pitcher, Jiro Noguchi.  Does this card look familiar?  It should.  It happens to be the same card that Julie sent me last week, but that's okay.  I'll keep the card she sent me in my NPB binder and I'll pass this card along to another Japanese baseball card collector who can use it.

Well that's it for today.  Time for me to go home, pop open a bottle of root beer, and finish up my A Pack To Be Named Later post which will hopefully be up in the next hour or so.