I've never really been a big fan of comic books.  Sure... I've read a few dozen Archie comics in my lifetime.  And I went through several collecting phases where I bought them for investments.  I have even purchased a handful within the past few years for their cover art.  But at the end of the day... I'd much rather watch a movie or television show based on a comic book character, than actually read a comic book.

The same rule applies for trading cards.  I have been wanting to add a few cards from the 1966 Topps Batman sets to my collection for years.  However something always seems to get in the way of me making the purchase.  Sometimes the price is too high.  Other times... I simply get sidetracked and lose interest in them.

Thankfully... the problem has been officially solved.  Back in May, Corky over at Pack War blogged about his Bat Signal card.  You can check it out... here.  His post motivated me to head over to COMC and track down three of the four cards I had been looking for.

One of the vendors was running a sale and had a bunch of his 1966 Topps Batman cards for $1.35 each, which I felt was reasonably priced based on the condition of his cards.

Here's a look at my haul:

The Bat Signal just might be the most iconic superhero symbol outside of The Man of Steel... which is why I love this card so much.

I've never been a fan of bad guys... but it's hard to not to like The Joker when guys like Jack Nicholson and Heath Ledger are giving fans award winning performances.

And finally... this is my favorite card out of all of the 1966 Topps Batman Black Bat series.  Seeing the Dynamic Duo swinging across the moonlit sky is simply put... a masterpiece.

With those three cards out of the way... I'm just looking for card #1 from the Black Bat series.  Being the first card in the set, it's going to have condition issues... plus it features a popular image of The Caped Crusader soaring down with his cape fully expanded like the Bat Signal.

I'm not sure if I'll be able to track down a copy for $1.35... but maybe one day one of you will blog about your copy... and motivate me to finally add it to my collection. 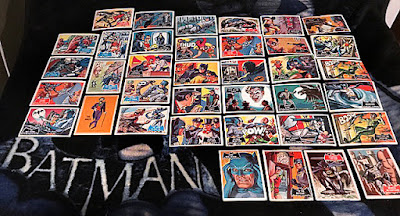 Update (12/4/17): I recently was contacted by a guy who has a bunch of these singles.  He's looking to sell them.  If you're interested, you can contact him at watphoto@gmail.com.
Posted by Fuji at 3:00 PM